This website requires certain cookies to work and uses other cookies to help you have the best experience. By visiting this website, certain cookies have already been set, which you may delete and block. By closing this message or continuing to use our site, you agree to the use of cookies. Visit our updated privacy and cookie policy to learn more.
Home » Blogs » Crossing That Bridge When We Come To It » Biking on the Tatara Bridge

Biking on the Tatara Bridge

Liz decided to bike across Japan.  As biking is one of my favorite things to do, I wanted to find out more.  It turns out that in biking across Japan, you also have to cross many of the major bridges.  So now I really wanted to find out more.  Then I found out that Liz biked across the Tatara Bridge, which is one of my favorite bridges and on my bridge bucket list to visit.  So I now I didn’t want to just find out more but actually be on the trip.  But since that was not an option, I asked if Liz could share some of her experiences. 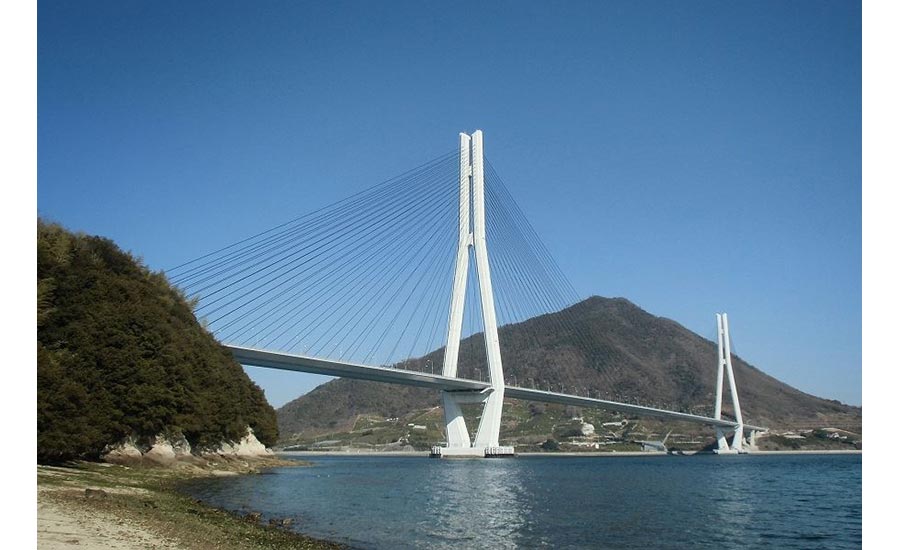 Question to Liz:  How did you decide on your biking trip?

Bicycle touring appeals to the way I like to travel in almost every way. I like moving slowly, I like being outside, and I believe that views are 100% more stunning when you’ve really sweat for them. I like the emotional journey that comes with being on a bicycle tour and sleeping outside – the cold, the wet, the monotony, the pain, offsetting the thrill of the adventure and the pride you feel in the achievement. The trip just ends up being that much more meaningful. I love the uncertainty and knowing that I will have to rely on the generosity of strangers.

When you’re traveling that slowly you experience a place in a completely different way, and you stumble on experiences and special hidden places that you could never have found if you were taking a different form of transportation. Some memorable highlights include an early morning trip to a natural hot spring tucked away in the hills next to a river, a night spent packed into a dorm room sharing food and wine with Japanese families on vacation at a hot spring resort on a mountain in a snowstorm, and many many tasty roadside snacks.

I second this description.  There is no better way to experience a place than biking across it.

Liz, why did you pick Japan?

I’m always wanted to go to Japan, but I know that it’s an expensive place to travel. I’ve read that biking is really popular there, and it’s a good choice for bike touring (especially for a beginner like myself) for several reasons: the roads are in excellent condition, drivers are respectful and cautious, campsites are plentiful and inexpensive, the countryside is beautiful, and you never have to travel too far to find water or something to eat. I really really love to eat, and when you’re biking all day long you can eat whatever you want, and probably tastes better too! Japanese food is fantastic. Another huge bonus of bike touring in Japan is the huge number of hot spring ("onsen") and public baths ("sento"). There’s nothing better than sinking into a hot Japanese bath after a long day of cycling. 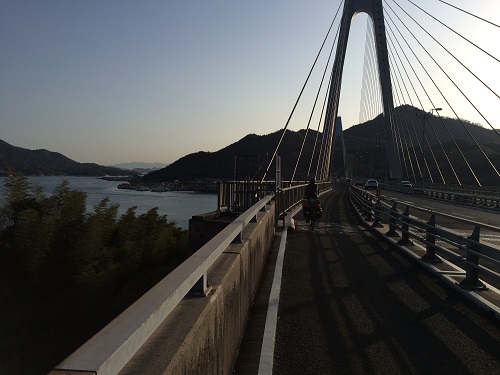 How did you make arrangements for the trip?

Basically, I quit my job. So that made it easy! I had spent two years in Haiti and I was ready for a change (though now I’m back in Haiti, so that didn’t work). Being young and unattached, I didn’t really need to make many arrangements. I definitely acknowledge that I’m in a unique position to be able to do something like this and I’m grateful for it. But all in all, since we biked and camped almost the entire time, the trip was not very expensive. We didn’t make any arrangements in Japan before we went! We ordered Japanese SIM cards online so we would have internet, and just went from there. Having internet definitely let us plan things on the fly. For power, we charged things where we could and had a small solar panel that I strapped across my back panniers.

Who did you meet?

There’s so much to say here I don’t know where to start!

The elderly people in the countryside were incredibly kind and curious about the trip. One of my friends who went on the trip speaks decent Japanese, but my Japanese is limited to simple requests, questions, and food – so conversations about the trip went like this:

I had this conversation over and over. The made exactly the same noise every time!

Mostly, the trip was an incredible lesson in self-reliance. It sounds cheesy, but I learned that I can endure more, accomplish more, and rely on my own body more than I thought I could. It was a lesson in finding a sense of equanimity through the ups and downs of the trip. Because as amazing as it was, there were times that were hard or painful or boring - biking all day in the rain, biking up a mountain in a snowstorm, ending up on dead end roads and having to take long detours. 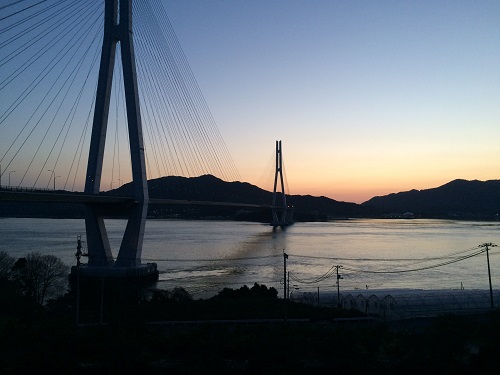 Liz’s trip lasted from early March to May.  The group started in Fukuoka, on Kyushu, and ended in Sapporo, on Hokkaido. Four bikers started the trip, but two people had to leave in Tokyo to get back to normal jobs. Only Liz’s friend Michael continued on with her for the full route.

The trip across the inland sea, from Onomichi on Honshu to Imabari on Shikoku only took a few days (from March 22 until March 25).  The inland sea is crossed by three routes, each one with amazing, jaw-dropping bridges.  One of the routes includes the Akashi-Kaikyo Bridge, currently the world’s longest span. Liz’s route included crossing of the Tatara Bridge.

Cable stayed bridges are more common now, but the Tatara Bridge, which opened in 1999, was completed at time when the modern form was still relatively novel.  The structure features many technical advances, and its long span leaped into the territory that would normally have been a suspension bridge.  In fact, an earlier version of the design was planned to be a suspension span.  The trend is continuing today, as cable-stayed main spans continue to crowd out the competition and the span lengths increase. 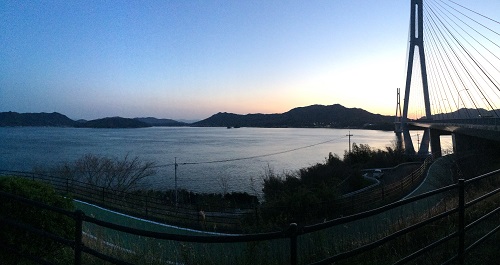 In addition to its technical excellence, the Tatara Bridge is beautiful.  The site is scenic and spectacular, with mountain ranges meeting up with the sea.  It is possible to botch a bridge crossing at this place, but the Tatara Bridge succeeds in gracing its site.  The span is slender and gossamer, and the towers perfectly proportioned. In a certain light, it looks like you are crossing on air and not a bridge.  Much in the same way the Golden Gate Bridge creates a spanning spectacle for its place, so does the Tatara Bridge amplify and glorify its surroundings.

Liz writes that her group crossed from Onomichi to Mukoujima Island and over to Innoshima Island to camp. She remembers just as she was biking up to the Tatara bridge to cross to Innoshima Island, her left pedal fell off. It had been ever so slightly cross threaded and slowly ground out the threads inside the crankset. Luckily, their campsite was just off the bridge, so she walked her bike across and then coasted down the hill to the campsite.  One might conclude from this part of the story that fate was in play here, because the pedal failure provided even more time to experience the greatness of the bridge.

The next day, Liz walked her bike to a bus stop and took a bus back to Mukoujima Island and caught the ferry across the Onomichi. It turned into a whole day affair and she needed to replace the entire crankset. But, by the end of the day, she was back on her bike.

The Shimanami Kaido is beautiful – lots of lovely coastline, and the islands are known for their citrus fruit. We ate mochi, stuffed with fresh orange, and at every rest stop vendors seemed to be giving us fruit. We camped the whole way, in a 4 man tent. It was a little early in the year, so we were a little cold, but we made it work.

The bridges are incredible, and it’s really amazing how much thought they’ve put into making them bike friendly. They’ve installed ramps up to every bridge that I believe are all a 3% grade, so it’s a gentle climb.

There was a lot more to this trip, with additional excellent bridges.  So we will get to enjoy updates to the story in future posts.  In case you are wondering, Liz is back at work.