This website requires certain cookies to work and uses other cookies to help you have the best experience. By visiting this website, certain cookies have already been set, which you may delete and block. By closing this message or continuing to use our site, you agree to the use of cookies. Visit our updated privacy and cookie policy to learn more.
Home » Blogs » Crossing That Bridge When We Come To It » Playing With Blocks Provides Lessons On Resilient Design

A structural engineer compares ideas with his one-year-old grandson

I never outgrew playing with blocks, but unfortunately they outgrew me.  When I was a kid, I started building elaborate structures out of my set of blocks.  I built cantilever bridges and arches.  I built long suspension bridges, with full anchorages and individual pieces suspended from the main cables.  In other words, a real functioning model suspension bridge and not a beam bridge with cables.  In addition to my horizontal career,  I had a short vertical construction phase where I built tall skyscrapers out of blocks and books.  These were tested for various levels of seismicity when I would shake the bottom to see if they would stand.  The structures were not evaluated for impacts from tsunami.

When my kids were kids, I got to relive my blocks phase, but then they also grew up.  So I was back to the dilemma of being an adult who couldn’t credibly play with blocks, at least in public.  But there was good news:  my grandson Izzy arrived last year.

At first when he was born, he could not do much.  But now at his one year birthday, he is ready.  Izzy and I have started playing with blocks.  His folks got him a starter set of plastic interconnect blocks.  We have spent a few afternoons constructing buildings and bridges.  Or more accurately, I have built the structures and Izzy tries to knock them down.  It turns out that playing blocks with a one-year-old provides a good lesson in redundancy and resilient design. 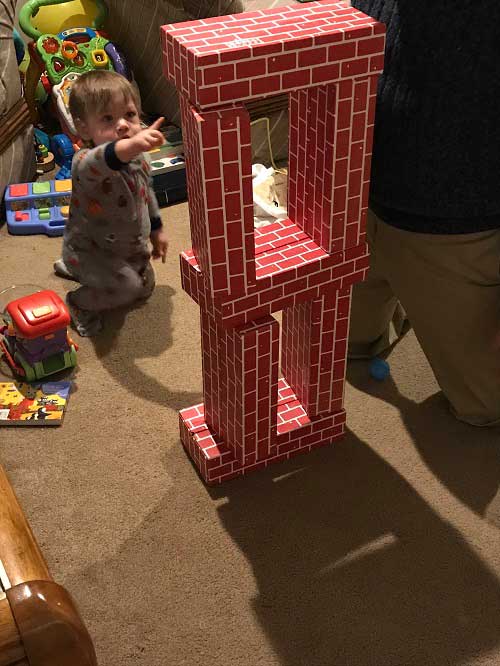 Working with co-engineer Izzy, my first designs were soaring and elaborate.  It was design-build, so I was the designer and the contractor.  I submitted RFIs to myself.  I did become concerned when I started responding.  Back at the construction site, the cantilever structures extended daringly, reaching out to test the limits of what was possible in block technology.  The foundations were balanced, but just so.  Yet these somewhat stable, well-designed and well constructed structures were no match for Izzy.  Like an EF4 but with a big smile and banking on his adorableness, he swooped down on my elaborate edifices and they crumbled to blocks of dust. 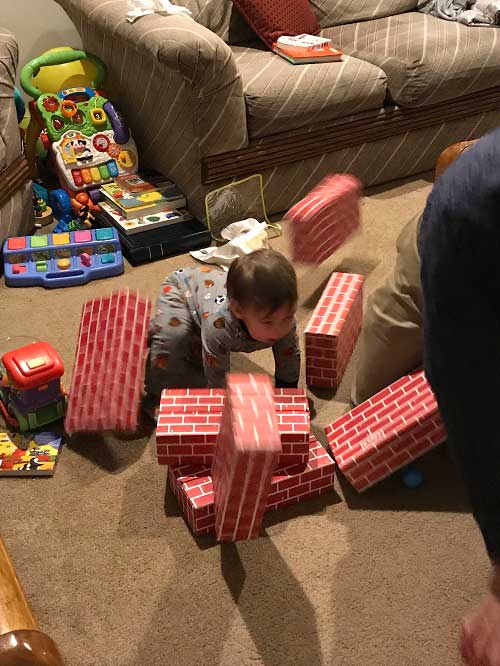 It was as if my buildings were Tokyo and Izzy was Godzilla. 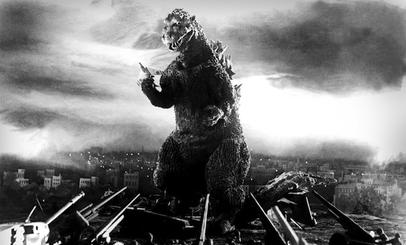 With a lot of iterations, I learned to make the structures more Izzy-proof.  The foundations which were initially delicate and daring started to become, well, blocky.  Using multiple layers of interconnecting blocks, my buildings and bridges became tougher.  They were more of a challenge for Izzy to wreck, and he did try.  After a while, he gave up on trying to completely knock them down, so the city survived.

Resilient design is somewhat like playing blocks with an exuberant one-year-old.

Last September, Hurricane Michael damaged a vast swath of the Florida panhandle coast and flattened the town of Mexico Beach.  Most buildings were either severely damaged or completely destroyed by the winds and tidal surge.  But one beach house survived.

This house was studiously designed to survive extreme conditions not normally encountered at Mexico Beach.  It was built of reinforced concrete while most of the adjacent (former) buildings were stick built.  Its design assumed flooding of the first floor, and so included sacrificial details that could be more easily rebuilt after the flood.  It had roof detailing to limit upward wind pressure during a hurricane, and was connected in such a way to help keep the roof on.

The surviving beach house was probably a lot more expensive than the stick built structures.  Except that it wasn’t, because the other structures were destroyed.  So in terms of accounting, the long term benefit of having a standing house outweighs lower short term costs of less expensive initial construction.

Issues of resilient design have greater implications than just the nuts and bolts of engineering and construction.  Bridges and buildings can be built to be more resilient.  The bigger problems of changing climate and associated political discord are tougher to address.  Maybe it is only through repeated tragedies and challenges that we will systematically adapt.  Overall, engineers and constructors can help with solutions to make the infrastructure more resilient.