The Quebec Bridge is on the short list for every bridge engineer to visit.  The bridge spans the St. Lawrence River at Quebec City.  It was built in 1907 and featured the world’s the longest cantilever truss span at 1801’.  It still maintains that title today.

Unfortunately, the bridge is better known for its tragedies instead of its success.  The structure experienced two construction disasters in which dozens of workers killed.  The first failure occurred when the center span length was increased from 1600’ to 1801’ without sufficient redesign.  Prior to the failure, costs were cut, the chief engineer didn’t visit the site, and a key structural member was observed to be in the process of buckling. 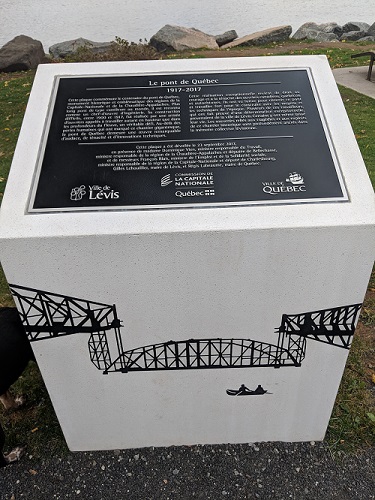 The story of the Quebec Bridge provides a cautionary tale for engineers.  It provides an example of engineering hubris and it is used as a case study for the many different ways a project can go wrong.  For engineers, a visit to the site does not just provide a view of the magnificent bridge.  It is also provides a space for a reflection on the great responsibility of what it means to be an engineer.  Today, remembering the tragedy and understanding the magnitude of engineering responsibility is commemorated in the ceremony of the Order of the Engineer.

Ryan decided to run in a half marathon with his wife, Amanda.  The race was in Quebec City, which was convenient because he could then check a visit off his bridge bucket list.  Finding the best place to view the bridge took some work.  Driving across is easy enough.  The bridge is a few hundred feet away from the adjacent Pierre-Laporte Bridge [https://en.wikipedia.org/wiki/Pierre_Laporte_Bridge], a suspension bridge built in 1970 with the longest span in Canada.  Both bridges cross the river a few miles southwest of the historic old city.

Because the suspension bridge blocks views on side, you need to find a spot on either bank to the north and east to get a good view of the cantilever bridge elevation.

The Aquarium du Quebec, adjacent to bridge on the northeast corner, probably provides the best view on the banks.  But a drawback is the view is not free and you have to visit the aquarium.  Also on the Quebec side further to the north east, there is a new pedestrian/bike path on the river next to Boulevard Champlain, which was recently rebuilt.  This path offers nice views But this space has limited access for parking and the adjacent highway has high speed traffic that detracts from reflective viewing.

There is space to walk below the bridge.  Standing between the two spans offers one of the best views for a bridge engineer:  the drama of the old historic cantilever truss and the sleek new suspension bridge.  This view is not unlike standing on the banks of the Fourth River outside of Edinburgh between the old rail bridge and the newer suspension road bridge.  But in this case, the two bridges are farther apart, so the view in Quebec is more dramatic and bridgy because the spans are separated by only a few hundred. 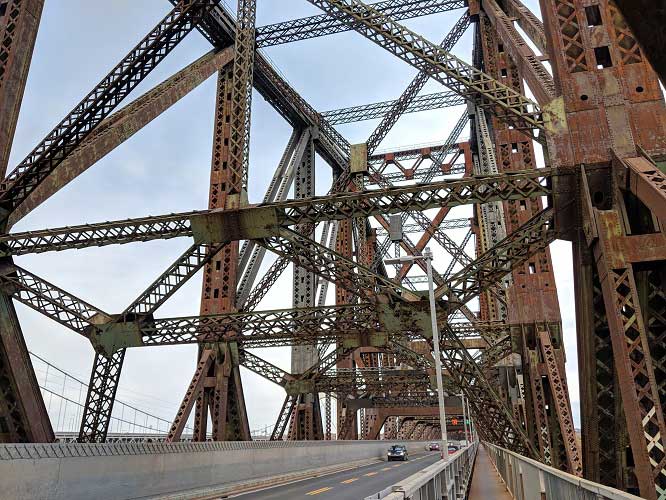 Driving Across the Quebec Bridge

For the best elevation view, look for a small park in the suburb of Levis on the southeast bank, to the north of the bridge.  The park is off Chemin du Fleuve, at the mouth of the Chaudiere River where it joins the St. Lawrence.  There is a parking lot and a nice park setting with a gazebo and places to gaze in bridge wonder.  Looking here at the old bridge, you see the span make its triumphant and now permanent leap across the river.  All is harmony and bridge grandeur.  But ghosts from the past construction failures remain to haunt the site. 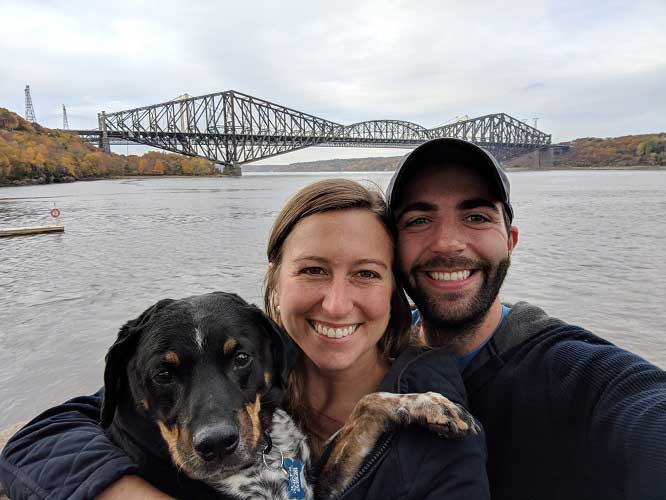 Ryan, Amanda and Bruin the Dog