By The Pennsylvania Bureau of State Parks, CC BY-SA 3.0, https://commons.wikimedia.org/w/index.php?curid=6757683

Two things that generally do not go well together, bridges and tornadoes, collided with unfortunate results on July 21, 2003.  On that date, a tornado struck the Kinzua viaduct in northwestern Pennsylvania.  The old bridge structure already had deteriorated foundation supports, which were then under repair.  The tornado lifted parts of the bridge off its foundation, and more than half of the structure collapsed.

The viaduct was an impressive and iconic railroad bridge in its day.  It consisted of a multi-span trestle crossing a deep valley, with tall, slender pier bents.  The structure was originally built from wrought iron in 1882.  To support heavier locomotives, it was rebuilt out of steel in 1900.  It remained in commercial service until 1959.  Four years later, it became the key attraction in Kinzua Bridge State Park.  Tourist trains operated across the bridge until 2002, when it was closed for good.

A project to restore the bridge began in early 2003.  Engineers expressed concern that the structure was vulnerable to winds because of the deterioration at the foundations.  That concern was well-founded.  On July 21, a relatively weak tornado touched down west of the bridge and hit the structure dead on.  The rotating winds swirled from the east and west, lifting several tower bents off their deteriorated foundations.  The offset resulted in a sequential collapse of tower bents, with more than half of the structure failing.  The remaining section was left standing as a dramatic monument in the park.

Tornadoes striking bridges are not a new phenomena. The Eads Bridge in St. Louis was hit by a severe tornado two decades after its opening, in 1896.  The steel arches withstood the wind, but much of the approach structure on the East St. Louis side of the river was destroyed.  Using today’s metrics, the tornado was estimated to be at strength, EF4 (on a scale of 0 to 5, with 5 being the worst), and even over a century later is still considered one of the most destructive twisters.  Builders of the Eads Bridge had proclaimed that the bridge was essentially tornado-proof.  Unfortunately that claim had a touch of hubris. 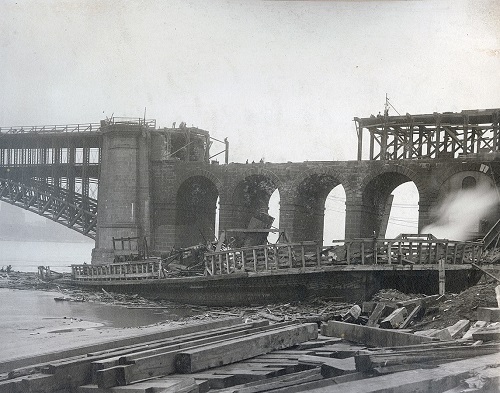 A more recent concern is the potential impact of climate change on the infrastructure.  In the US, tornadoes are reported to have more frequent outbreaks in the southeast.  Data suggests that “tornado alley” is shifting in that direction from the Midwest.

It is not clear that overall climate change is leading to more frequent and destructive tornadoes.  It is clear that, over time, there is more infrastructure in the US for tornadoes to strike, as urban and suburban landscapes have increasingly been built-up.  So even without more frequent tornadoes, there is more vertical and horizontal construction for the twisters to strike.

How to design structures for tornadoes presents a challenge for engineering and risk analysis.  It is technically possible to design for anything, but the costs of designing for rare extreme events may not be viable.  It is probably not possible to completely design for impacts from a disastrous storm like the F5 tornado that destroyed much of Joplin, Missouri.  A strategy would be to provide hardened safe rooms and spaces within structures to shelter during a severe storm, even if most of the building is damaged or destroyed.  Bridge structures do not, in general, provide much protection from tornadoes.  This misnomer has led to loss of life in several cases, as people sought shelter under bridge decks.  When a tornado struck, this exposed space experienced increased winds from a wind-tunnel magnification effect. 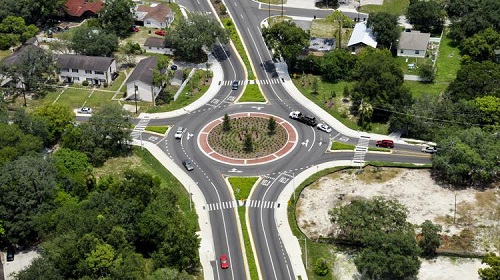 Back in Pennsylvania, at least one observer has suggested that roundabouts are causing more tornadoes.  Based on this theory, the increased use of roundabouts leads to a more circular vehicular motion.  This in turn would result in more tornadoes.  It may be the orientation of the roundabout (assuming it actually contributed to tornadic activity) would either add or subtract to the swirling wind motion.  Since almost all tornadoes in the northern hemisphere rotate in a counter-clockwise direction, clockwise roundabouts would tend to counteract tornado formation.  Unfortunately, North American drivers are on the right side of the road resulting in vehicles circling roundabouts counter-clockwise.  But in England, drivers are on the left side of the road, and traverse roundabouts moving clockwise.  This may explain, then, why there are fewer tornadoes in England, since the vehicular motion would be in opposition to formation of the tornado, unlike in North America.  To date, no study has been performed to evaluate this theory.