Three shopping malls south of Boston have addressed the challenge posed by Amazon and online marketing, with varying degrees of success.  The malls are located in the towns of Canton, Walpole and Foxborough.  Two started out as enclosed, indoor malls.  The third, in Foxborough, was built with exterior pedestrian paths.  How these malls have changed to meet the online challenge helps to illustrate overall trends that impact the suburban infrastructure landscape.

The town of Foxborough is better known as the base for the New England Patriots football team.  Foxboro Stadium, the previous home of the Patriots, was a notoriously frugal New England kind of place.  Football fans would park in muddy lots in November and trudge down and across Route 1 to get to the stadium. 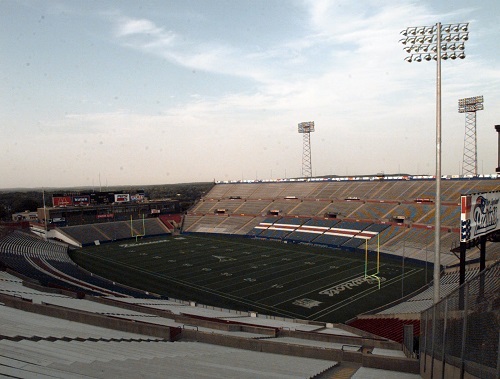 The stands were metal bleachers with row seating, a typical high-school setup at a B-level high school.  Passing vast rows of porta-potties, you would climb up onto the bleachers, huddle together and howl at the losing Patriots as a cold northwest wind howled down from Quebec. Game over — fans sulked and trudged back into the mud past the porta-potties, waiting the hopeful spring and the arrival of the Red Sox.

Things have changed a little bit since back in the day. Foxboro Stadium was demolished and replaced by the sleek, state-of-the-art Gillette stadium. 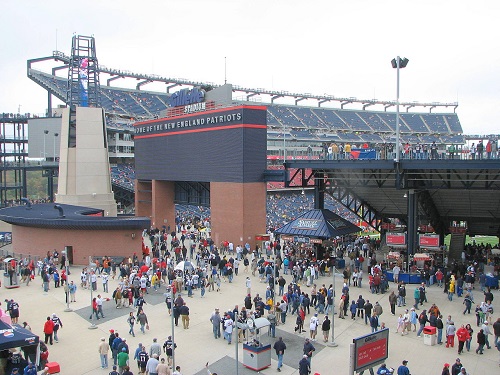 Among its many virtues (number one being that it is not Foxboro stadium), the venue greets visitors with a pedestrian arch bridge. 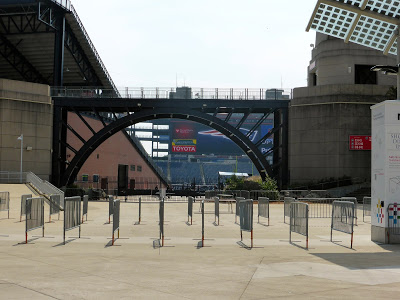 The new stadium included an accompanying shopping mall, “Patriot Place”. The mall originally had a mix of entertainment, dining and retail shopping stores. The layout is a hybrid of a strip mall and a “lifestyle center” type design, with public space outside.

The strip mall section includes the usual big box and drive up restaurants and grocery stores.  The outdoor pedestrian section has a pleasant street that runs along the spine of the walkable mall area, from the movie theater complex to the two suburban hotels.  The street has New England rocks and landscaping.  A solar canopy is placed on top to achieve some renewable energy creds.  The canopy is a little out of place in that regard, since, overall, most of the Patriot Place development is covered by giant parking lots.

The mall originally provided a mix of retail shops, restaurants and entertainment stores.  Being next to Gillette Stadium, there were more entertainment venues than would be found at the average mall.  But there were also typical clothing shops and retail stores.  Most of these have now gone out of business.  What remains are the restaurants, bars and some service shops.  A few years ago, a block on one side of the mall was demolished and replaced by an expansion of the adjacent hospital.  This construction is still in progress, but you can see that the architects have made an effort to visually integrate the expanded hospital space and offices into the storefront landscape of the pedestrian street.  So at least it still looks like you can go shopping instead of going for an x-ray or rehab. 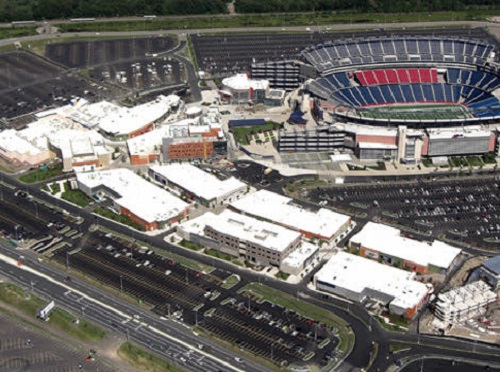 The growth of medical space and deletion of retail stores appears to be one reaction to the onslaught of Amazon.  You can click and have your clothes delivered to your house with little muss or fuss, so there is less of a need to go to a store.  But you can’t click online to have your medical services attended to (at least, not yet).  With increased demand for medical space, abandoned clothing stores provide one place to house these facilities.  In some ways, the locations may not be ideal, since retail spaces were originally designed for retail and not for the needs of health care.  It may be a little awkward for a pulmonary center to set up shop next to McDonalds.

Similar changes in use of space have taken place at the former Canton Mall and the Walpole Mall, both located within 10 miles of Patriot Place.  In Canton, the 70’s style enclosed shopping mall was completely demolished and rebuilt as a lifestyle center.  A row of linear shopping buildings surrounds a large parking lagoon.  To avoid the strip mall vibe, the buildings are festooned with facades and turrets so that the shops look almost like individual buildings, which are then built to look almost like individual town houses. The parking lagoon has some landscaping, including a small seating area with a clock and a patch of grass.  It is in the middle of the lagoon and few people actually sit there.  But at least it provides a visual clue that the parking area is a notch up from a more pedestrian asphalt space.

The center, now called the “Village Shoppes”, are anchored by a successful supermarket.  At this time, you can’t get groceries online.  Actually you can, but most people still go out shopping to buy their food at the supermarket.  So, while online services are nibbling at the grocery business with home delivery, venerable brick and mortar supermarkets are still selling most of the food.  And they are helping to fill retail store space that is otherwise losing out to the online competition.

The Shoppes originally included the usual spread of retail clothing stores, but these have largely closed, with only a few stragglers still holding on.  The empty store spaces have been filled by restaurants, a community theater, and two medical rehab/ urgent care facilities.  But not everything has been filled, and many of the former clothing stores are now empty store fronts.

The approach taken at the Walpole Mall has been a little different.  The enclosed mall was failing, so the shopping center gradually added strip row stores accessed directly from the outside, with no need to enter the mall.  Then, as part of a major reconstruction project, the enclosed mall, itself, was chopped in half.  Once piece was added to the adjacent strip mall stores.   The remaining, shriveled half of the enclosed mall is forlorn shell of its former self.  It has mostly empty stores, and tumbleweeds (figuratively) blow down the deserted corridors.

Outside, the plaza has mini-big box stores, a few pods of restaurants, and a large, successful health club.  In the age of Amazon, the formula for filling the stores seems to be the same:  restaurants, service, health clubs and health care.  A wax emporium opened in one storefront, along with a dollar store.

Of the three shopping centers, Patriot Place has the advantage of a built-in entertainment crowd attracted by the Patriots and stadium events.  But even its future status as a retail center is uncertain.  The movie theater still attracts a big crowd, at least until streaming (via Amazon) conquers that business as well.  Today, the future looks like a challenge for brick and mortar stores.  If no one goes shopping, there is a lot of space to be repurposed or demolished.  This results in major impacts for infrastructure design and construction.

It is possible that technology will continue its relentless march towards the end of brick and mortar stores.  Amazon may perfect drone delivery so that soon, postage and trucks won’t be required.  You click online and a box drops from the sky. 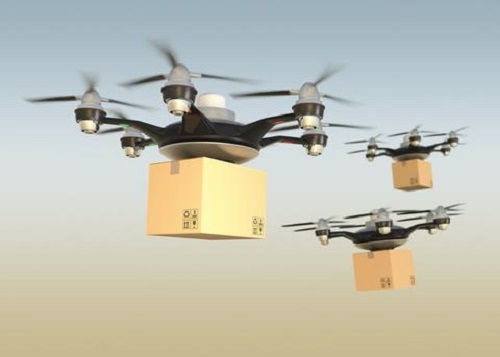 But on the other hand, there is a certain personal touch associated with stores that is not achieved by the impersonal online world.  Consider the following example.  My colleague purchased a swimsuit via Amazon that did not fit well,  so she tried to return it.  But when she contacted the vendor, she received this message:

Hello, I am very sorry to bring you an unpleasant shopping experience.  There is no problem with the size of the clothes.  The tight-fitting ones will better show you the graceful figure.  If you feel a little tight, you can exercise some slimming and get a better dressing effect.  I hope to hear from you.  We are very sorry that we have not been able to satisfy you.  The goods have been transported and cannot be cancelled after delivery.

Thank you, Amazon seller, for finally telling me the truth about why bathing suits just don’t fit me. I’m going to have some double stuffed Oreos for breakfast now.

Double stuffed Oreos are available for purchase at Amazon.com here.