This website requires certain cookies to work and uses other cookies to help you have the best experience. By visiting this website, certain cookies have already been set, which you may delete and block. By closing this message or continuing to use our site, you agree to the use of cookies. Visit our updated privacy and cookie policy to learn more.
Home » Blogs » Crossing That Bridge When We Come To It » The Bride and the Bridge

The Bride and the Bridge

A popular wedding venue on Long Island, New York, is next to a bridge.  Engineers attending weddings there get to participate in the ceremony and also check out the bridge.  Fortunately, the bridge overlooks everything and it is visible from most of the rooms.

In addition to the spectacle of having a guest bridge at the wedding, a friendly bridge provides appropriate symbolism.  A wedding is all about connections between the shores of two people.  So is a bridge.  At the venue, the adjacent bridge is a double-leaf bascule.   Over time, this bridge occasionally opens and closes, just like the ups and downs of a marriage.  Not everything in a marriage functions perfectly.  Sometimes you have to raise the spans to let the ships pass by.  Hopefully the tug boats don’t bash the piers.

The bridge in question crosses the Reynolds Channel, connecting Long Beach, New York to Long Island.  The channel has been spanned by a draw bridge at this site since 1922.   The first bridge was too low, requiring more frequent openings for boats.   A second bridge, really a pair of bridges, replaced the original bridge in 1955.  These spans, collectively named the Long Beach Bridge, are one of three highway crossings from the Long Beach barrier island to Long Island.  A fourth bridge provides a connection for the Long Island Railroad.  The Long Beach Bridge was rehabilitated in 2002.  I am not sure about how that is symbolic of a marriage.  Maybe marriages need regular maintenance every few years to avoid demolition and replacement.  Actually, that is a good analogy. 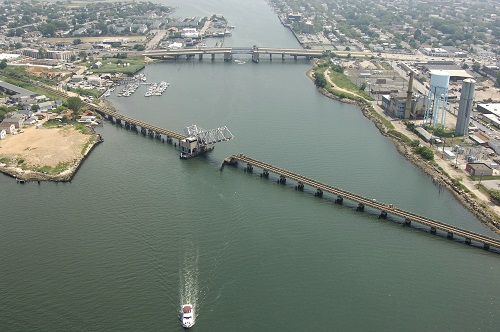 Reynolds Channel.  Railroad Bridge is in foreground, Long Beach Bridge is in background.https://marinas.com/view/bridge/x9uv2_Long_Island_(Reynolds_Channel)_Railroad_Bascule_Bridge_Long_Beach_NY_United_States

Next to the bridge, the Bridgeview Yacht Club has been operating for two decades.  The club’s website displays pictures of handsome couples decked out in their finest, with the bridge looming in the background.  The photographers focus on the couples, but the bridge photobombs in many of the shots.  The Bridgeview Yacht Club is not really a yacht club, in the sense that you can join it with your yacht.  It is a facility that hosts parties.  Weddings are the main event, but the club also accommodates corporate parties, holiday gatherings, and other parties where it helps to be next to a bridge.  The club provides catering, and there are different menus to choose from.  The menus don’t feature bridge-centric selections like “Draw Span Sushi” and “Cable Stayed Broccoli Spears”.  I think that is a lost opportunity, and an oversight that hopefully can be rectified in the future. 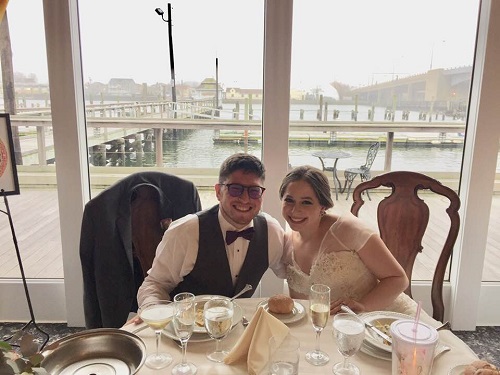 The bridge has provided a backdrop to hundreds of weddings held at the club.  During a wedding ceremony, you can sip champagne and listen to the hum of cars on the metal deck bascule span as the newly-married share their vows.  When it is time for the first dance, I imagine that the band plays “Bridge Over Troubled Water”.  They did at my wedding, although unfortunately there was no bridge in the background.

It is a coincidence, or maybe it isn’t, that the words “bride” and “bridge” are almost the same.  Over the years, many students have misspelled the word, “bridge” in my class.  Replacing “bride” with “bridge” often makes sense in the context that it was written.  For example, a student may write, “I am very impressed with that bridge.”  Replace the word, “bridge” with “bride” and the sentence still works.  This, by the way, is one advantage of being a bridge engineer.  In addition to the lofty symbolic meanings associated with bridges, you can misspell the word in your reports and it usually still makes sense.  This advantage is not apparent in some other infrastructure disciplines.

It is likely that nothing lasts forever, as the aging Long Beach Bridge will attest.  But at a wedding, we imagine the promise of eternity.  The newlyweds share their first dance (hopefully, to “Bridge Over Troubled Water”) and the old bridge hums approvingly in the background.  It is a misty, gray evening, and the lights are on along the Reynolds Chanel dock and across the span.  In the mist and shimmering lights, the bridge looks ephemeral and ghostly.  But the decades are now before the young married couple, and it is forever.  The wedding guests can only imagine what will happen tomorrow.  Tonight, connections are made and the span is complete. 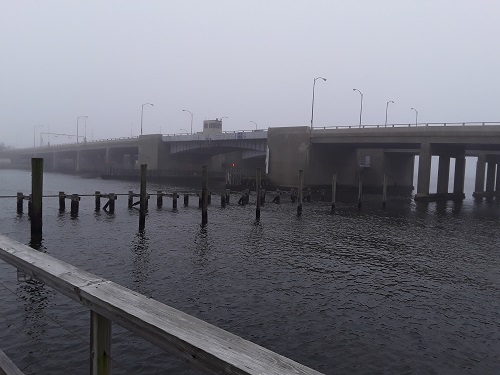