Twice a year, the setting sun lines up in such a way that you can see it through the canyons formed by Manhattan skyscrapers.  This event is known as “Manhattanhenge”, a reference to the ancient  Stonehenge monument in England.

Stonehenge was built thousands of years before Manhattan.  It has stone columns and caps which were  placed in alignment with sunrise in midsummer and sunset in midwinter.  Archeologists note that Stonehenge was constructed in many phases over centuries.  In the last phase, it is thought that the builders reached a level of sophistication to place stones to match the trajectory of the sun. 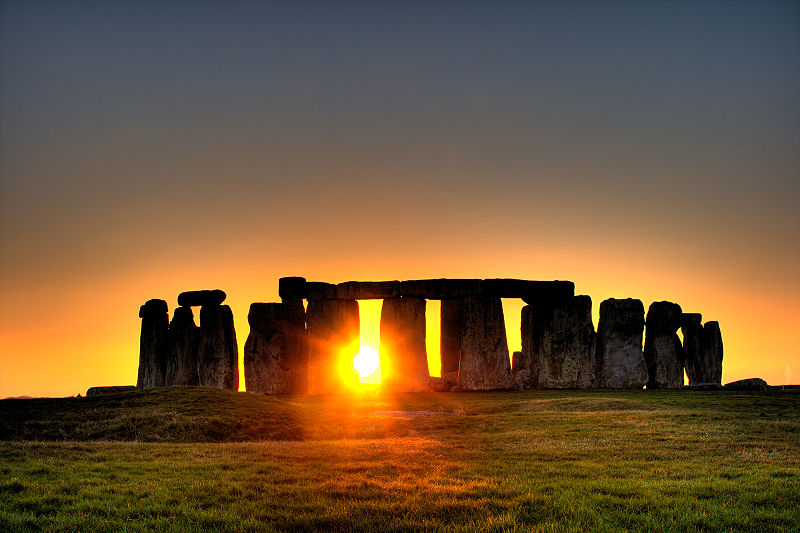 The Manhattanhenge event occurs around Memorial Day and again later in July.  Many New Yorkers line the streets to view the phenomena.  In 2016, a street was partially closed so that viewers could experience the event with reduced distractions. 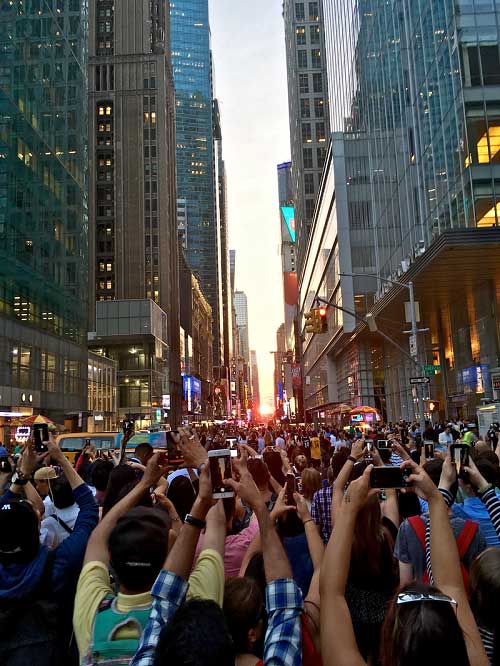 New Yorkers have many 21st Century distractions.  That they would congregate en masse to witness the event is, in itself, notable.  There is nothing particularly special about watching a sunset.  It happens every day and weather permitting, you can see it.  But the idea of seeing the setting sun uniquely line up in the manmade canyon strikes a chord for modern viewers.

There is a scene in the movie, “2001: A Space Odyssey”, which takes place thousands of years before 2001.  It is the dawn of man.  Out on the savannah, protohumans dance around a strange black slab accompanied by a chorus of mournful vocals and synthesizer music.  The setting sun flashes on the black monolith and the protohumans then discover how to make weapons out of antelope bones.  In actual 21st Century Manhattan, almost two decades after 2001, the millennials who are selfie-ing Manhattanhenge with their smart phones are somewhat like the protohumans depicted in the movie dancing around the black monolith, although clearly there are many differences.  For one, the fictional movie protohumans did not have smart phones.  But if they did, they probably would have taken selfies.

A deeper meaning to Manhattanhenge, if there is one, may be related to viewers’ experience of modernity butting up against the primordial. Manhattan’s street grid was designed in the early 19th century, and documented in a report published in 1811.  The report  and associated plan governs the basic organization of Manhattan’s above ground infrastructure.  In other words, the massive infrastructure of Manhattan, one of humanity’s greatest built achievements, is organized around a plan from 1811.  This plan did not envision the construction of skyscrapers.  Its authors were not far removed from the time New York City was mostly farmland.

The solar spectacle of Manhattanhenge, then, is an unplanned, twice-a-year accident.  In a sense, it is like a stopped clock which tells the time correctly twice a day.  Maybe New Yorkers and guests relate to the strange phenomena of Manhattanhenge because it is unexpected and unplanned.  So there is a reminder amidst one of humanity’s greatest planned infrastructure achievements of utter randomness and lack of planning.  The event is startling and beautiful, and its randomness achieves a sense of grace.  Randomness is not something engineers and builders usually embrace.   But every now and then, the unexpected is worth pondering and even appreciating.

Bridge was a series of logs across a haunted stream.