I have a love-hate relationship with Route 128 - mostly hate. Route 128 is the ring expressway that circles Boston.  It has free flowing traffic- at 3 in the morning.  Otherwise, depending on when I leave for work, there are the usual, progressive aggravations and jams. But if I leave too late, say 6:30am , the road may be so gummed up that it’s better just to stay home.

Some days, though, the commuting gods shine down from the heavens. Or, fate has it that conditions are just right. The other day I enyjoyed a morning of commuting grace.  There was barely a car in sight. Maybe it was because everyone was on summer vacation, or maybe a strategically placed accident clogged the flow further back. Whatever the reason, I was flying north on 128, at the speed limit or possibly even a tad faster than that. That morning, it was like an early Sunday morning during the middle of rush hour.


That night, a front had passed and the sky had gray, northwest clouds.  As I zoomed around the last big curve and approached my exit, the red rising sun broke through.  Sunlight streamed through the clouds.  The near-empty lanes sparkled.   It was a nice way to start the day. 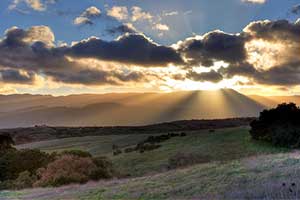