This website requires certain cookies to work and uses other cookies to help you have the best experience. By visiting this website, certain cookies have already been set, which you may delete and block. By closing this message or continuing to use our site, you agree to the use of cookies. Visit our updated privacy and cookie policy to learn more.
Home » 2021 Top 400 Sourcebook: Oil Platforms Boost Production in the Gulf of Mexico
Texas & Louisiana Construction NewsPower & IndustrialCompanies

Over the summer, BP marked the safe start-up of the Manuel project in the U.S. Gulf of Mexico, the fourth of five major projects the energy company expects to deliver globally in 2021. The project, delivered by Subsea Integration Alliance, a partnership between Subsea 7 and OneSubsea Schlumberger, includes a new subsea production system for two new wells that are tied into the Na Kika platform, located about 140 miles off the coast of New Orleans. The wells are expected to boost gross platform production by an estimated 20,100 barrels of oil equivalent a day (boe/d). Manuel is located east of the Na Kika platform in 6,625 feet of water, and the two new wells were drilled to a depth of approximately 21,000 ft. “Our disciplined investment in Manuel is part of our target to add 900,000 boe/d of production from new projects by the end of 2021,” said Ewan Drummond, BP senior vice president of projects, production and operations, in a statement. Both BP and Shell hold a 50% working interest in the Manuel development.

ReGen III Oil Corp. plans to construct a new 5,600 bpd re-refining facility in Texas. Koch Modular Process Systems will work alongside Process Dynamics Inc. to provide the design, engineering and delivery of modular process systems to be installed within ReGen III’s new re-refinery.  PCL Industrial Construction Ltd. is also a part of the project team. Koch is now moving through the full FEED phase of the project.

BHP Petróleo Operaciones de México, S. De R.L. De C.V., in partnership with Pemex, in May selected McDermott to provide front-end engineering design of a semi-submersible floating production unit for the Trion Project in the Gulf of Mexico, about 19 miles south of the U.S./Mexico border. The scope of the FEED contract includes engineering tasks related to the configuration, sizing and analysis of the production unit, including topsides, hull, risers and mooring.

ExxonMobil and SABIC said in July their joint venture, Gulf Coast Growth Ventures, near Corpus Christi, Texas, reached mechanical completion of a monoethylene glycol unit and two polyethylene units. Project startup is expected to begin in the fourth quarter of 2021. The project, which includes a 1.8-million-metric-ton ethane steam cracker, is expected to be delivered ahead of schedule and under budget. Project construction was led by the Wood Group, McDermott & Turner Industries Group, Chiyoda & Kiewit and Mitsubishi Heavy Industries and Zachry Group. 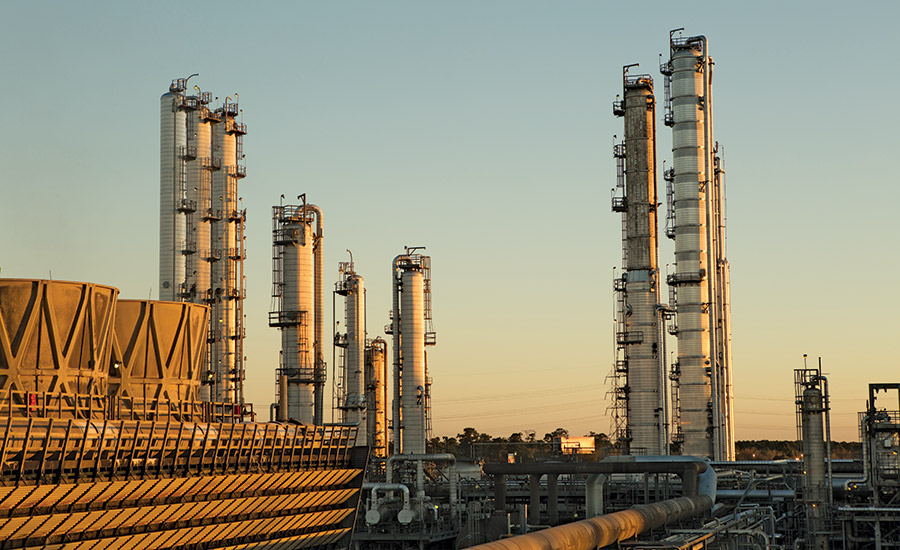 2030
The year crude oil production will level off to 13 to 14 million barrels of oil per day through 2050
U.S. Energy Information Administration’s Annual Energy Outlook 2021

Chevron Phillips Chemical broke ground in May on a 1-hexene unit in Old Ocean, Texas, near its Sweeny facility. S&B Engineers and Constructors was awarded the engineering and construction contract. Construction is expected to begin during the third quarter of 2021, with project startup in 2023. The project is expected to create 600 construction jobs at its peak. 1-hexene is central to manufacturing high-performance plastic products. Chevron Phillips Chemical operates the world’s largest on-purpose 1-hexene unit in Baytown, Texas.

ENR 2018 Top 400 Sourcebook: Work Begins on One of Largest Projects in Seattle History