This website requires certain cookies to work and uses other cookies to help you have the best experience. By visiting this website, certain cookies have already been set, which you may delete and block. By closing this message or continuing to use our site, you agree to the use of cookies. Visit our updated privacy and cookie policy to learn more.
Home » 2021 Top 400 Sourcebook: Pace Picks Up on Salt Lake City Wastewater Plant
Mountain States Construction NewsPower & IndustrialCompanies

According to the city Dept. of Public Utilities, the public works project is one of the largest in its history, and it will be designed with sustainability in mind. The project goal is to use at least 25% recycled materials. The project team is also pursuing an Envision Platinum certification for the facility and LEED Gold certification for the administration building.

Since the groundbreaking at the end of 2019, the project team installed 43,000 wick drains at a depth of approximately 125 ft below the surface, and hauled about1.5 lb of soil to the site to compact the existing, poor-quality soil instead of installing driven steel piles.  The team recently began construction, and the pace is expected to pick up in mid-to-late 2022, with a completion date targeted for 2024.

In May, Granite Construction won an award to build a 2.3-mile-long, 108-ft-tall earthen embankment dam, a component of the overall Lake Ralph Hall project near Dallas. The project, one of the state’s biggest in the past 30 years, will provide a new source of water for an area in which population is projected to increase nearly fivefold over the next 50 years. The firm's $160-million contract involves building the Leon Hurse dam as well as a cast-in-place concrete spillway, with a 120-ft-wide overflow section, along with other associated infrastructure.

In July, Canadian contractor Aecon Group and joint-venture partner Oscar Renda Contracting received the project award for a $272-million design-build upgrade of the North End Sewage Treatment Plant.in Winnipeg, Manitoba, the city's oldest and largest wastewater treatment facility. The construction team will design and build a new headworks facility that will include a raw sewage pump station, a micro-tunnel extension of existing interceptor sewers, a grit removal system and other related infrastructure. The project is the first of three planned. 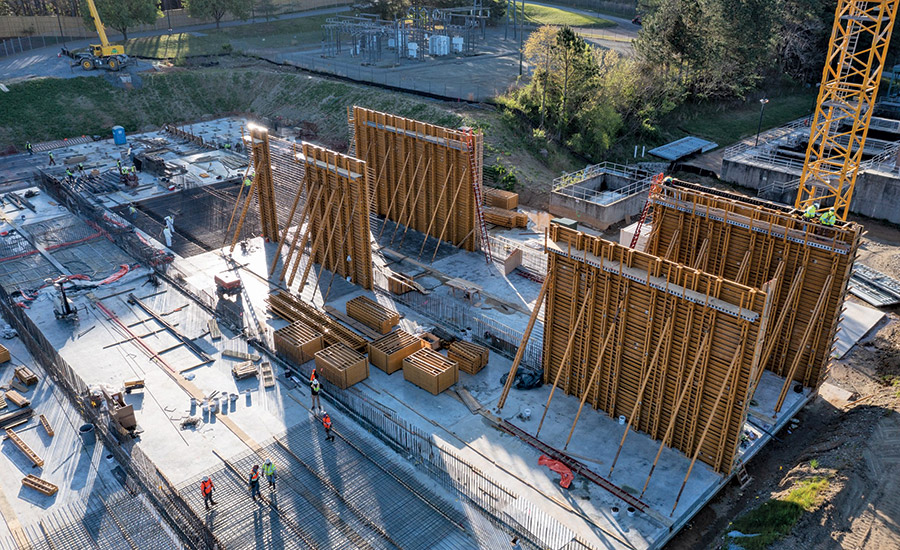 A major upgrade and expansion of the Big Creek Water Reclamation Facility in Roswell, Ga., is on track to reach completion in 2024. Archer Western Construction and joint venture partner Brown and Caldwell are spearheading the progressive design-build project. Based on the Metropolitan Water District of Georgia’s forecasts of population and economic growth, the facility will provide additional capacity to meet wastewater demands in Fulton County. The progressive design-build project will expand the facility to 32 million gallons per day from 24 mgd, install new membrane technology and odor control systems and replace outdated equipment and buildings.