Site work is underway for a vaccine manufacturing facility in a Dartmouth, Mass., business park that is set to develop new vaccines for COVID-19 and other infectious diseases.

Tonix Pharmaceuticals, based in Chatham, N.J., plans a 45,000-sq-ft clinical-scale manufacturing plant to be constructed as an existing building renovation in the New Bedford Business Park in Dartmouth that s expected to be operate in the first half of 2022. The clinical-stage biopharmaceutical company declined to reveal the cost of the project.

Dean Poillucci, New England regional business unit director for Woburn, Mass.-based IPS Engineering, the architect and engineer of record for the project, says Cardinal Group is performing slab cutting and removal to accommodate underground utility services and preparing fittings for the new 4,000-sq-ft Butler building prefabricated warehouse-type structure that will be added to one corner of the existing estimated 1970s-era structure. The firm also will modify the facade and make interior structural improvements or additions to support equipment, he says.

Cardinal Group’s New England construction division is taking an integrated project delivery approach “to match the technical expertise and experience required to deliver the project with the quickest delivery schedule possible,” IPS said. It noted “the project is unique, as Tonix is a virtual company and this project is its first facility of this type.”

Detroit-based Walbridge has substantially completed construction of the first phase of Nikola Motors' 270,000-sq-ft manufacturing facility in Coolidge, Ariz. Construction began on the $600-million facility in July 2020. Nikola's trucks are powered by hydrogen and the company plans to build out hydrogen stations between central Arizona and Los Angeles.

A $300-million data center complex is being developed in Gainesville, Va., for CTP-1 LLC, which is registered through Corporation Services Company, a company data center organizations use to mask their involvement in projects. The project will involve four two-story data centers, ranging from 114,330 sq ft to 132,750 sq ft. The Prince William Board of County Supervisors approved permits for the center in June. Residents are concerned the center will require an overhead transmission line. The applicant says it will not build the center if the project needs such a line. The project’s civil engineer is JCL Consulting.

Bright Green Corp. is planning to build a cannabis manufacturing and research facility in Grants, N.M., it announced in May. The facility will produce cannabis and other herbs, and contain storage, packaging and medical research space. The first structure will be 600,000 sq ft on a 20-acre plot, to be completed in nine months. The second and third buildings will be erected on separate 50-acre plots and take 18 months to build. The project is valued at $300 million. 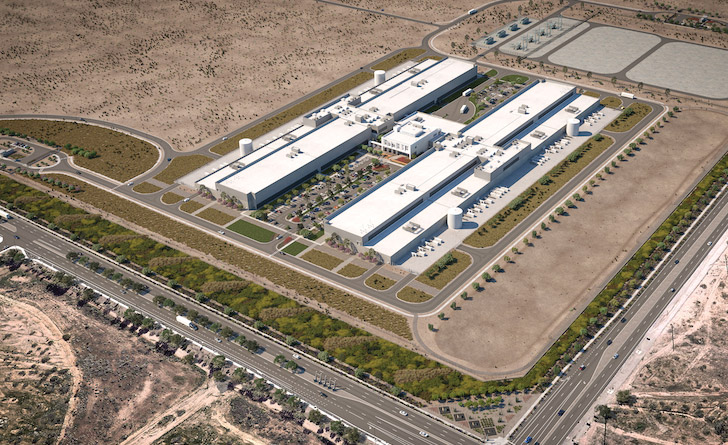 2.1
Million
Shortfall of workers for manufacturing jobs by 2030
— Deloitte and the Manufacturing Institute

Construction has begun on an $800-million data center for Facebook on a 390-acre site in Mesa, Ariz. The 960,000-sq-ft project is Facebook’s first data center in Arizona. Redwood City, Calif.-based DPR Construction is leading the design-build team. From design and construction forward, the Mesa facility will be among the most advanced energy- and water-efficient data centers in the world, according to Facebook. The facility will use solar power, supplied by Tempe, Ariz.-based utility Salt River Project.

More Offshore Wind Leases Up for Grabs in Massachusetts