Work is underway by Mortenson to repower the 60-MW Oasis wind farm in Mojave, Calif., for renewable energy developer and operator Terra-Gen. After acquiring the plant in 2019, Terra-Gen brought in Mortenson as its construction partner to repower the facility, which first operated in 2004.

Mortenson will replace 60 1-MW turbines with 17 modern 3-MW turbines and will be responsible for access roads, foundations, underground collection, erection and updates to the existing substation. At peak construction, the project will employ an estimated 100 craftworkers.

Mortenson started working on the project in spring 2021. It is slated for completion in September 2021.

Alliant Energy has contracted with Burns & McDonnell to build 250 MW of solar projects in Wisconsin. Burns & McDonnell will provide engineering, procurement and construction for three Alliant projects: Bear Creek, North Rock and Wood County. The company also will design and build 10 miles of high-voltage overhead transmission lines to connect the solar facilities. Bear Creek and Wood County should be complete by 2022, with North Rock on track for 2023.

Wood PLC is leading an audit to help the U.S. National Park Service determine whether it can reduce its energy costs and carbon footprint by switching to solar microgrid power at four remote locations in the Glen Canyon National Recreation Area in Arizona and Utah. Three of these areas run entirely on diesel generator power; the fourth runs on a photovoltaic system supplemented by diesel power.

Goodfellow Bros. is constructing the Waikoloa Solar and Storage Project on the Big Island of Hawaii. Consisting of a 30-MW solar photovoltaic array and a 120-MWh lithium-ion battery storage system, it will be among the first utility-scale solar farms for a Hawaii Island. Waikoloa is one of eight renewable energy projects that Hawaiian Electric Cos. selected in 2018 to bring the state closer to its goal of achieving 100% renewable energy by 2045. The project is expected to contribute 7.1 %  of the
island’s energy needs. 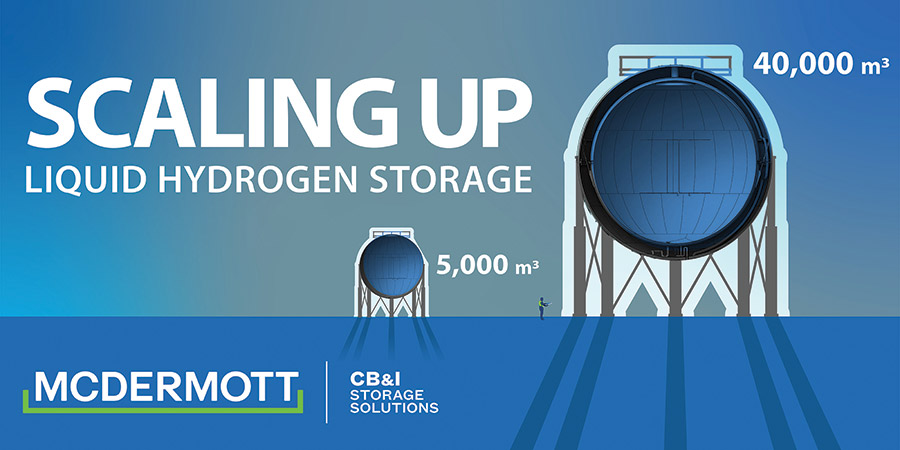 McDermott International’s CB&I Storage Solutions business completed the conceptual design for a 40,000-cu-meter liquid hydrogen sphere storage tank, which would be one of the largest of its kind in the world. The design is part of a study for an unnamed natural gas producer awarded earlier this year. The design for the double-wall liquid hydrogen sphere is eight times larger than the hydrogen sphere CB&I is building for NASA, which will use the tank to fuel rockets for missions to Mars, and will be the largest cryosphere ever built at a NASA facility.