This website requires certain cookies to work and uses other cookies to help you have the best experience. By visiting this website, certain cookies have already been set, which you may delete and block. By closing this message or continuing to use our site, you agree to the use of cookies. Visit our updated privacy and cookie policy to learn more.
Home » Blogs » Crossing That Bridge When We Come To It » The Headless Horseman and the Bridge

The Headless Horseman and the Bridge

Washington Irving’s short story, “The Legend of Sleepy Hollow”, is about a teacher named Ichabod Crane.  He lived in the sleepy village of Sleepy Hollow, New York at the end of the 18th Century.  Today, the village is not as sleepy. It is a busy New York City suburb in Westchester County just north of the Tappan Zee Bridge.  But in the 18th Century, Sleepy Hollow was a remote and wooded country village.  In the story, Ichabod Crane was described to be lanky, nervous, and superstitious.  He competed with his rival, Abraham van Brunt, for the affections of Katrina Van Tassel, the daughter of a wealthy farmer.

At the Sleepy Hollow harvest party, Ichabod made a gallant move to secure Katrina’s affections, but he was rejected and Katrina chose his rival, instead.  Heartbroken, Ichabod rode on his horse out into the gloomy October night.  He was alone in the woods.  It was cool and damp.  On the dark byways, someone (or maybe it was something) was following poor Ichabod!  Whoever it was followed on horseback, dressed in a dark cloak.  Ichabod tried to get a look of the rider’s face.  But there was nothing to see, because the rider had no head, at least not attached to his shoulders.  The horseman carried his head on his lap.

Terrified, Ichabod kicked and urged his steed forward into the damp, dark mist. The headless horseman followed close behind. Use your imagination- you can hear the hoofprints echoing in the damp woods.   The race proceeded to a bridge next to the Old Dutch Burying Ground.  Ichabod wished to cross to safety, but unluckily for him, the headless horseman made it to the bridge first.  The horseman hurled his detached head at Ichabod and knocked him off his steed.  Ichabod retreated in panic.

The next day, there was no sign of Ichabod.  All that remained at the crossing was Ichabod’s horse and a large, smashed pumpkin on the ground.

As this is a legend, probably there was no headless horsemen.  Some noted that the horseman was in actuality the victorious Abraham van Brunt, and he was not headless but he chased after Ichabod with a jack-o-lantern in his hands.   All commentary does confirm that there was a bridge.  A key question from the legend then is:  what happened to the bridge?

In present-day Sleepy Hollow, Route 9 crosses the Pocantico River near the Old Dutch Reformed Church.  The bridge is a closed spandrel wall concrete and masonry arch bridge that was built in 1912.  This is not the bridge at which Ichabod encountered the headless horseman, having been constructed many years later.  But a New York State historic marker identifies the crossing as the site of the original bridge. 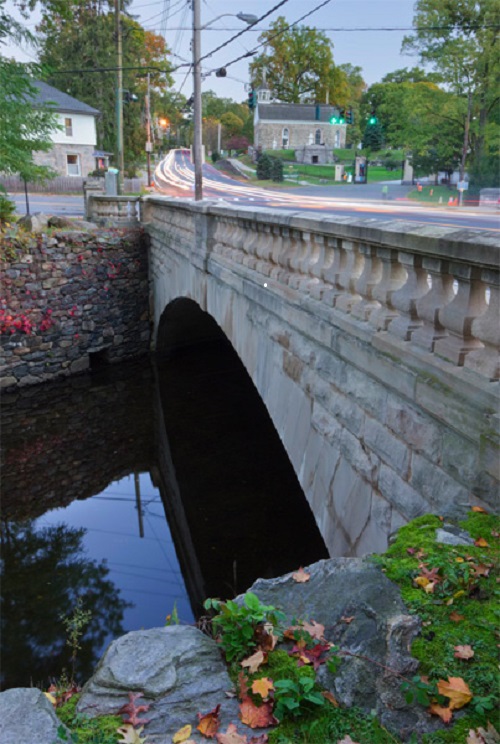 Some researchers have commented that the actual bridge and location was to the east, further upstream.  The bridge may have been a timber pony truss, similar to the one below: 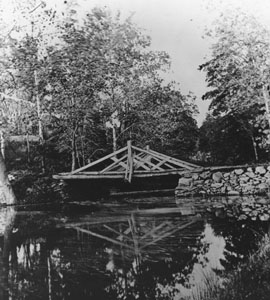 Disney made a short cartoon film about the story in 1949.  The film shows a covered bridge.  But this is unlikely because there were not known to be any covered bridges that far south in New York State.  The bridge was probably a timber pony truss like the one above.  This structure is thought by some historians to be the actual bridge that inspired that part of the story. 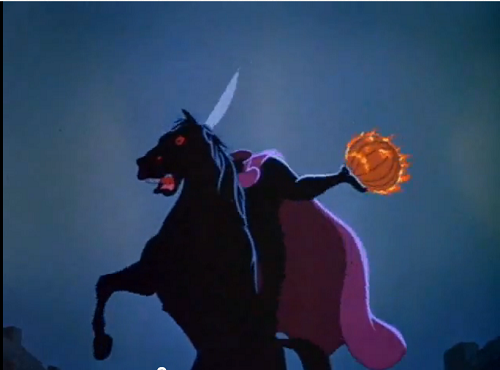 In addition to the busy crossing at Route 9, several bridges cross the Pocantico River further east.  A series of stone masonry arch bridges, originally built by the Rockefellers, grace the local state park. 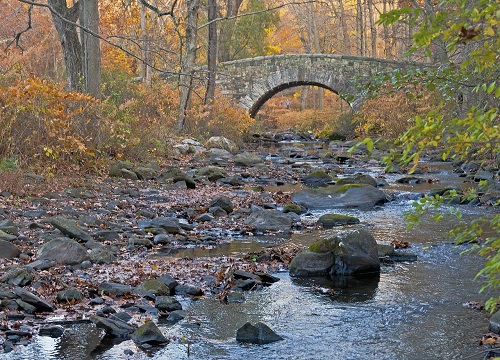 You can wander in the park the end of October, in the forlorn, desolate woods not far from the busy village.  Blazing jack-o-lanterns guard the windows, and young ghouls and goblins scurry for treats.  The trees are bare and the terrain is damp.  It is late at night in the middle of the woods, and a cold and forbidding wind rustles the fallen leaves.  Somewhere in the distance you hear what sounds like hoofbeats on the damp ground, getting closer.  It is time to hide under a good, safe bridge.