This website requires certain cookies to work and uses other cookies to help you have the best experience. By visiting this website, certain cookies have already been set, which you may delete and block. By closing this message or continuing to use our site, you agree to the use of cookies. Visit our updated privacy and cookie policy to learn more.
Home » Blogs » Crossing That Bridge When We Come To It » Strange Doings on Memorial Bridge

Hampden County Memorial Bridge crosses the Connecticut River at downtown Springfield, Massachusetts.  The bridge was built from 1920 - 1922.  It features a series of graceful concrete arches with architectural elements on the deck.  The bridge is well scaled for its site, and serves as a visual infrastructure icon for Springfield and western Massachusetts. 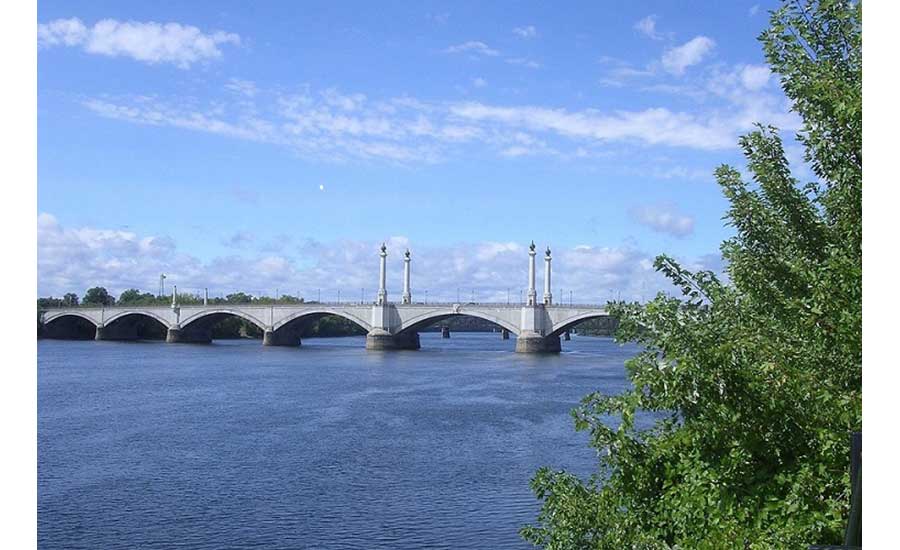 In the last few years, the bridge has been subjected to unusual events.

A Midwest-style tornado struck the city in June 2011.  The tornado was one of the most powerful storms of its type to strike Massachusetts.  The Commonwealth does get hit by a few twisters annually, but typically they are weaker and short-lived storms.   This tornado's storm path was 37 miles long, touching down in Westfield and raking towns and forests to the east all the way to Sturbridge.  In Springfield, the damage path crossed a swath of the downtown, damaging or destroying hundreds of structures. 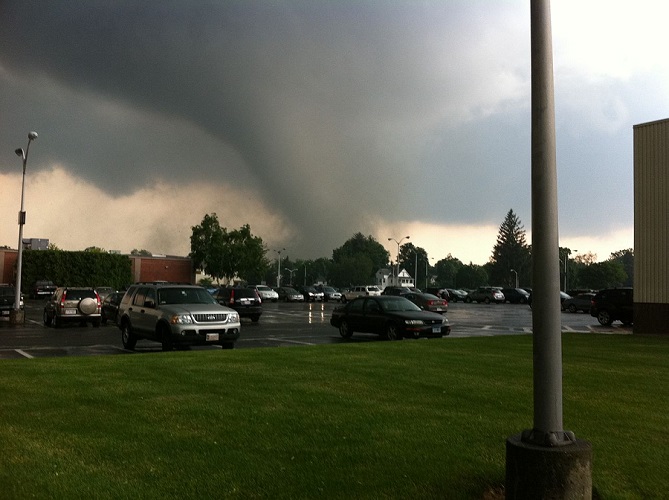 To get to the downtown, the twister had to cross the Connecticut River.  The swirling funnel was recorded on a building remote camera.  Winds roil the surface of the river, and you can see the water foam rotating and even rising into the storm.  The video is stunning and surreal.  Things took an ominous turn when the tornado widens and swirls towards the Memorial Bridge, which was laden with traffic at the time.  Tornadoes are not common in the northeast.  One can imagine what drivers were thinking as the storm enveloped the bridge.  For a few moments, the video recording shows driving mist and wind, and then the funnel continues its march southeast into the downtown and nearby neighborhoods.

Although much of Springfield was later pummeled, the bridge, itself, was not damaged.  A truck overturned in the wind, which was the extent of major impacts.

This summer, the bridge starred, again, in an unusual recording.  Massachusetts had authorized construction of casinos after many years of debate, and the first full service facility opened in Springfield in late August 2018.  The owners prepared an advertisement with the bridge seemingly as a backdrop.  It is quite a production.

The advertisement takes place at night.  The bridge appears to be closed to traffic, and the scene features gymnasts, dancing waiters, and a happy patron pulling a winning slot machine as it (and she) are rolled across the deck.  Recognizing that the casino is an MGM facility, the advertisement concludes with a solitary lion prancing across the bridge in the direction of the shimmering skyline of Springfield.

Unlike the tornado video, which is real but looks like it could not possibly be so, the casino advertisement shows what appears to be the actual bridge.  But while the human performers and maybe the lion are real, the bridge deck apparently was photo-rendered and at least parts of the structure are simulated.  One clue to this visual creation is that the parameters and dimensions of the deck in the ad don’t exactly match the real bridge.  But the video looks great, and the illusion of visitors, staff and wild beasts dancing on the bridge en route to gamble in the new casino is fun to watch.

Memorial Bridge has been around a long time and now it has withstood an EF3 tornado and a wild roaming lion.  It is a handsome bridge that apparently is well suited to survive the apocalypse.