The iconic image of Death Valley is of antelope bones broiling in harsh reflected glare from the sandy wasteland.  Death Valley isn’t where you want to be in summer, where the daytime temperature reaches 120 degrees F and sometimes doesn’t stop there.  During the winter, however, Death Valley is a different place.

I participated in “Climate Ride”, a five day biking trip in Death Valley National Park at the end of February.  Climate Ride is a charity organization that raises funds for sustainable transportation and environmental preservation.  The organization arranges supported biking and hiking tours at spectacular locations around the US and the world.  The tour sizes range for twenty to several hundred participants.  Each participant is responsible for a fund raising goal and this is, in part, how the charity is funded.

The basic idea behind Climate Ride is that participants appreciate a landscape or a place more intensely when they camp and bike through it for several days.  Death Valley is a magnificent place.  It is the largest National Park outside of Alaska.  The park features a severe landscape of buttes, towering rock walls, forlorn desert vistas, and a unique valley floor.  The valley is largely below sea level and when you visit, it looks like you should be on the shoreline of a pleasant lake.  But everything in that pleasant lake has evaporated, and what remains are dazzling salt flats, wind-blown sand dunes and strange formations like the “Devil’s Corn Field” where extremely hardy plants grow in a formation that looks sort of like a corn field, vaguely. 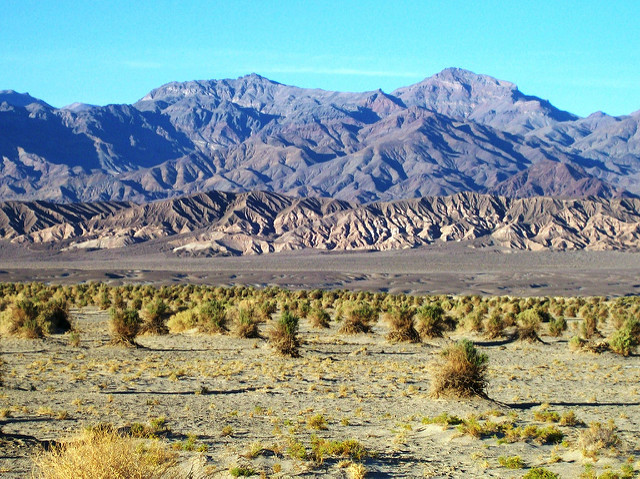 In the winter, daytime high temperatures range from 60 to 80 degrees F.  Combined with good roads that are not overly travelled and the Martian scenery, the park becomes a road biker’s paradise.  We started camp at Stovepipe Wells, one of the two larger visitor areas on the valley floor.  Our tour featured not only biking but camping, which I hadn’t done in decades.  Putting the tent together was complicated, especially after hours of biking.  But I’m an engineer who is supposed to know how to do things like that.  Also, one of our tour leaders, Chris, was very patient with me and eventually I got the hang of it. 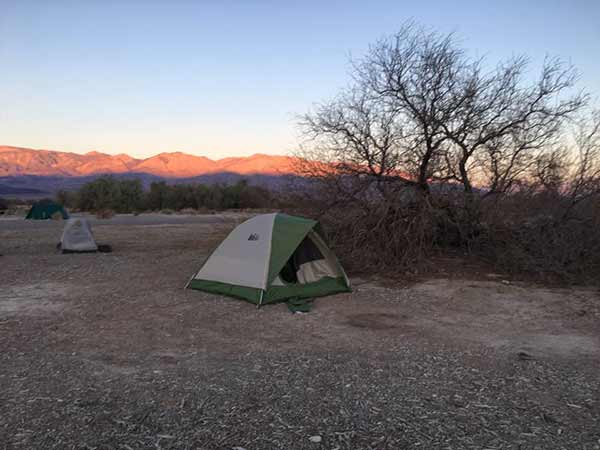 Each day we had a target route with rest stops and lunch planned roughly in the middle.  The routes were not complicated because there are few roads in the park and it is difficult to get lost.  Daily rides varied from 50 to over 70 miles per day.  That sounds like a lot, but for seasoned road bikers it is not a great challenge.  But what was a great challenge was the elevation.  The total climb for four days of biking exceeded 18,000 feet. The valley floor is relatively flat, but the tour had us biking up into the mountains and back down.  Repeatedly.  On the first day, we slogged up over 5000 feet to a remote campsite at Wildrose in the western side of the park.  During the very slow ups and the very fast downs, we encountered a family of bighorn sheep.  One of the babies was not shy and actually wandered onto the road so we could take better photos. 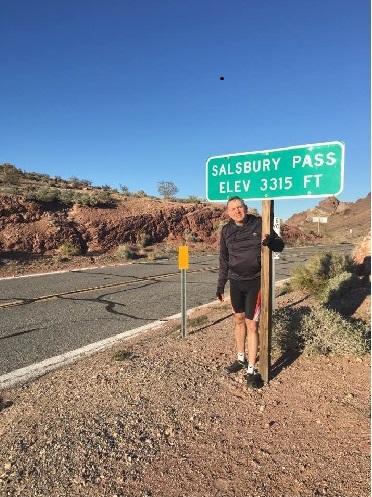 Death Valley is the driest place in the US, but it has received an unusual amount of rainfall the past few years.  Recently, the park was subject to 1000 year floods which washed away some connecting roads, including access to Scotty’s Castle, an eclectic tourist stop in the northern part of the park.  Another road was washed out just beyond the Wildrose Campground.  So instead of biking on to our evening destination, we had to loop back to a road which was still intact.  During the tour, we saw Caltrans at work repairing the flood damage.  One of the most popular stops in the valley, the Artists Drive, was still closed.  But repair crews were on it and it was scheduled to be reopened later in March 2017. 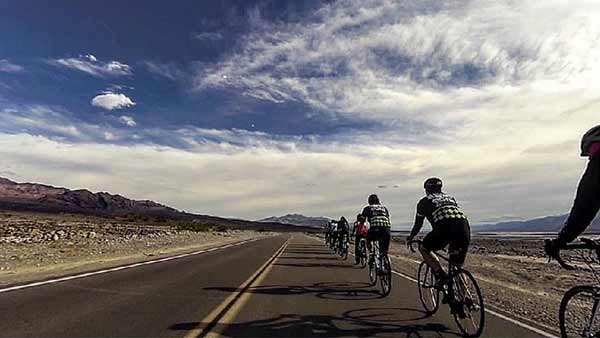 Death Valley has astonishing things to see during the day.  The astonishment continues after sunset, when the night sky reveals millions of stars (I was going to go with the Carl Sagan quip here about the “billions and billions”, which is probably more accurate).  With little light pollution, city dwellers who are camping in the valley get to experience the full panoply of the glorious heavens.  One night, we were fortunate to have a guest who setup a telescope.  We observed the hazy neighboring galaxy of Andromeda.

The tour attracted a diverse group aging from young bikers in their 20’s to a retired couple a bit older than that.  One rider, Paul, brought a self-made bamboo bike, which was partially powered by batteries.  Paul rode his bike a good ten feet off the ground.  The bike had space for a guest rider below.  Paul invited riders to cruise in style along the wind-swept desert roads.  The bamboo bike was a great spectacle in the park that attracted a lot of attention from befuddled bystanders.

After completing this challenging trip, what remains in addition to fatigue and lots of sore muscles, is a set of enduring images and memories.  If you are fortunate to experience Death Valley, especially at bike eye-level, you will find yourself in an expanse of long horizons and vast, sun-scarred spaces.  Despite the name, the valley is full of life if you know where and what to look for.  In addition to the sheep, many raptors and bunnies, we did encounter a curious coyote, although not the road runner.  In comparison to the din of regular life, what the park best excels at is its stillness.  There is wind and sometimes the howl of a coyote.  But usually it is quiet and still.