States gain $5.3B for bridge program, with locks and dams, Everglades restoration and power transmission set for funding

As the Infrastructure Investment and Jobs Act moves into its third month on the books, the Biden administration is stepping up its implementation activity. Agencies are announcing detailed plans for how some of the IIJA’s key funding components will be divided among states or allocated to specific projects. Contractors and engineering firms eagerly awaiting concrete steps toward contract awards see signs of progress. 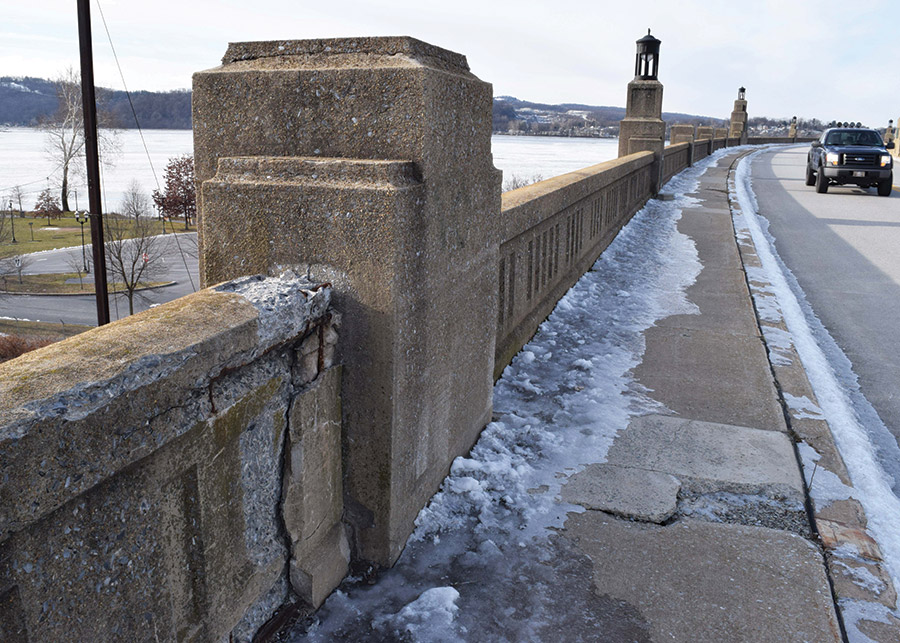 President Joe Biden’s infrastructure implementation coordinator, Mitch Landrieu, said on Jan. 18 that the infrastructure work “is not a race to see how many ribbons we can cut before the end of the year.” Landrieu, a former New Orleans mayor, added, “We are definitely going to go fast, but we are not going to hurry, and we are going to get it right.” The huge package, enacted Nov. 15, is estimated at $1 trillion to $1.2 trillion.

Agencies are pushing ahead. The U.S. Dept. of Transportation on Jan. 14 announced allocations for the first-year installment of the IIJA’s new $27.3-billion,  five-year program to replace and rebuild aging bridges.

The DOT initially is distributing $5.3 billion in fiscal 2022 apportionments for the program, using a formula based on each state’s estimated costs to upgrade or rehabilitate bridges rated in poor or fair condition (see table). Twenty states plus the District of Columbia and Puerto Rico each will get the minimum amount of $45 million. And $165 million is set aside for use by indigenous tribes. 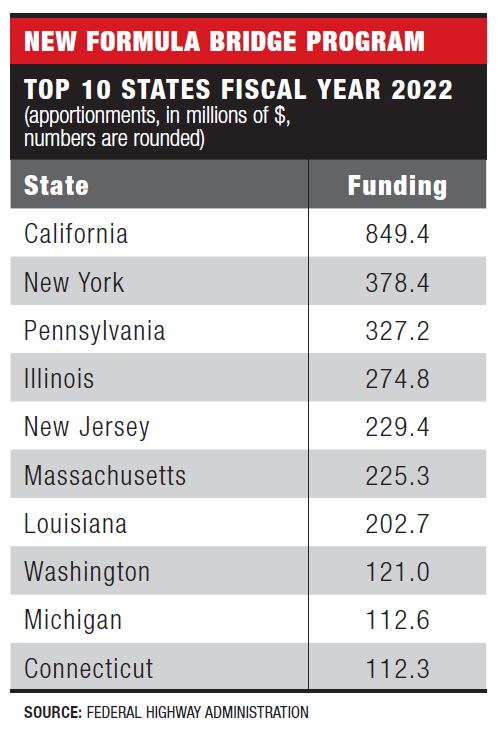 In an important new wrinkle, the program requires states to use at least 15% of the new money to rehabilitate or build smaller bridges not in the National Highway System, a network that includes the Interstates and other major arterials.

The new provision’s lure for such “off-system” bridges, including those owned by counties, cities or towns, is that those projects will be 100% federally funded. That is a significant departure from the traditional system, in which states generally must contribute a 20% share of federal-aid bridge or highway project costs.

Clarence Anthony, National League of Cities CEO and executive director, hailed the new set-aside. Speaking at a Jan. 14 briefing with the American Society of Civil Engineers (ASCE), he said, “This is simply amazing news for smaller rural communities, places that have been hit hard economically.”

Maria Lehman, ASCE president-elect and director of U.S. infrastructure at engineer GHD, said states and localities have had transportation plans in place and some projects have also gone through preliminary design. “I’m hopeful that in many parts of the country, you’re going to start seeing orange cones all over the place this summer,” Lehman said.

In another key IIJA action, the U.S. Army Corps of Engineers on Jan. 19 released a project-by-project breakdown of how it plans to spend the fiscal year 2022 portion of the act’s $17.1-billion infusion for its civil works program. The much-awaited “spend plan” includes funds to start some new projects, speed up work on others and provide enough dollars to bring another set of projects to completion. Of the total, $7.4 billion in 2022 will go for projects in the Corps’ civil works construction account. That includes funds to start 22 construction projects and complete funding for 19 others. Funding is in the form of appropriations.

The spend plan’s largest 2022 line-item is $1.1 billion for ecological improvements in the Everglades, as part of a long-running restoration program. Rep. Debbie Wasserman Schultz (D-Fla.), told reporters that the plan provides “massive funding for a huge tranche of [Everglades] projects that have been stalled for many years.” Congress authorized the Comprehensive Everglades Restoration Plan in 2000. Its total cost is estimated at $23.2 billion. 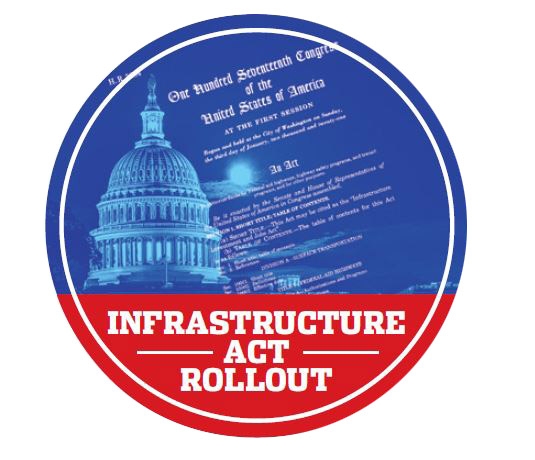 Gary Loew, a senior adviser with consulting firm Dawson & Associates, expects contracts for some projects in the plan to be advertised within one to six months. Loew, a former Corps civil works official, says, “Money won’t be the issue. The only issue now is for the [Corps] districts to move through engineering and contracting into construction as quickly as they can.”

The administration also has laid out an interagency framework for working with states and tribes to distribute the $4.7 billion the IIJA allocates for closing and remediating abandoned, or “orphan,” oil and gas well sites.

The U.S. Environmental Protection Agency, U.S. Depts. of Interior, Agriculture and Energy, and the Interstate Oil and Gas Compact Commission—whose members are governors from oil and gas-producing states—signed a memorandum on Jan. 14 to set up a plan to work together to roll out the funds quickly.
I

Interior documented at least 130,000 U.S. oil and gas wells with unknown or insolvent owners. Wells not properly sealed can leak methane and other chemicals. Nearly every state with documented orphan wells met the Dec. 31, 2021, deadline to declare interest in applying for available grants, Interior says. 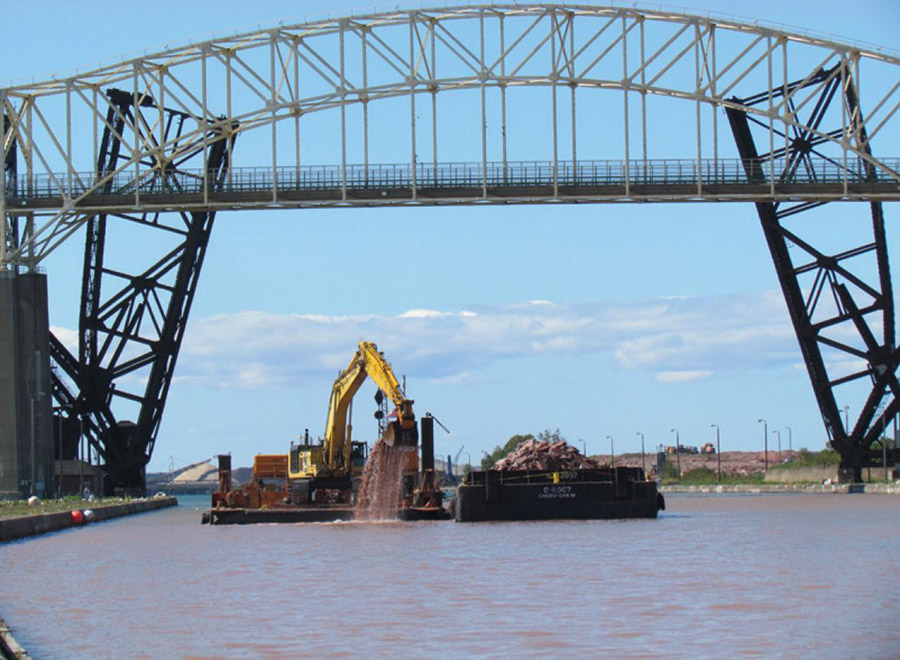 Inland navigation projects are well represented on the Corps list, including $479 million to complete a new lock at Sault Ste. Marie in Michigan.
Photo by Michelle Briggs, U.S. Army Corps of Engineers

DOE said on Jan. 21 that, working with DOT, it would also begin parceling out funds in mid-February from a $7.5-billion infrastructure law program to create 500,000 electric-vehicle charging stations, with the first to come on line this year, said Michael Berube, deputy assistant DOE secretary for sustainable transportation.

The law also includes $3.5 billion over five years for projects that capture carbon dioxide from the atmosphere. In December, DOE issued a request for information for technologies ready for demonstration. Also allotted to DOE is $2.5 billion for advanced nuclear projects and $8 billion for clean hydrogen, the latter including at least four regional hubs to improve its production, processing, delivery, storage and end use.

Applications for hydrogen program funding will open this summer.

American Council of Engineering Cos. Vice President Jeff Urbanchuk says that while act funding distributed by formulas, such as the new bridge program, is going to states and localities “expeditiously,” he adds that “it’s important to be careful and deliberate rather than just get money out quickly.”