This website requires certain cookies to work and uses other cookies to help you have the best experience. By visiting this website, certain cookies have already been set, which you may delete and block. By closing this message or continuing to use our site, you agree to the use of cookies. Visit our updated privacy and cookie policy to learn more.
Home » Ali Asmari: Roboticist Challenges Construction to Rethink Its Processes With Roadway Excavation and Repair Robot
AwardsTop 25 Newsmakers2021
ENR 2021 Top 25 Newsmakers

Many have tried to adapt the exacting precision and  consistency of factory-floor robots to construction sites and work zones, but there are always compromises and problems. Some roboticists and technologists might get frustrated by these seemingly endless setbacks, but Ali Asmari relishes the challenge.

“What I am really passionate about is bringing the capability of robotics from a controlled environment to a real environment,” he says. This goal has been a driving force behind Asmari’s work at ULC Technologies, where he spearheaded an effort to build an autonomous robot that can scan and locate utilities beneath roadways, then excavate, repair and re-bury them with minimal human input.

The result of this work is the Robotic Roadworks and Excavation System, or RRES, which underwent successful trials with U.K.-based gas utility SGN last year. With a fully articulated robotic arm on a battery-powered platform, the RRES can perform gas line repairs beneath a paved road with only a couple of technicians keeping an eye on it as it goes through the necessary steps. Working through a keyhole cut in the pavement with only a single lane of traffic disruption, the RRES condenses down an operation that would normally take a small crew of workers. 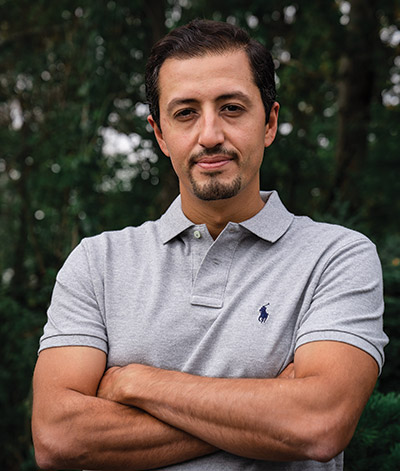 Dealing with the rugged conditions of construction jobsites and road repairs was not Asmari’s initial career goal. Originally from Iran, Asmari came to the U.S. in 2010 for graduate studies in robotics. After a Ph.D. thesis on computer vision and AI, Asmari worked at several robotics firms before landing at ULC in 2018. He says he was drawn to the challenges of building robots that could orient themselves and work in a chaotic environment like construction. “Designing and testing everything in the lab is cool and fun, but once you deploy to the field, that’s 50% of the work.”

While he expected some resistance from construction and utilities to high-tech approaches like RRES, Asmari says the industry seems ready for a revolution in how it does things. “There have been many instances where I demonstrate this equipment, these new technologies [to utilities and contractors], and those folks see it as a no-brainer,” he says. Cost is always an issue with sophisticated robots, but many in the industry see the safety benefits of taking an equipment operator out of a cab or construction workers out of a  muddy trench. “I personally think the rollout of autonomous solutions is not an overnight thing,” says Asmari. “There will be challenges and failures. But we learn from every step of development.”

Since the successful trials last year, RRES has continued to find fans among utilities in the U.S. and Europe. Asmari has since moved up to director of automation at ULC Technologies, and is taking a broader look at how automation can improve construction and maintenance of infrastructure.