If you drive on the back roads of Great Barrington, Massachusetts, you may be fortunate to encounter a beautiful and unusual bridge.

Great Barrington is a rural town in the southeastern corner of the state.  The town center has several blocks of a restored streetscape, with historic buildings and a late 19th century vibe.

The village has gradually transformed from hardscrabble roots to its current successful role as a service center for the southern Berkshires.  A few miles outside of town, the landscape is rolling and bucolic.  A drive along one of the beautiful back roads takes you past wood lots, stone walls, expansive hay fields, and, in season, herds of cows.  Most views feature a soaring Berkshire hill or two on the horizon.  Each season provides a different and distinct experience, so it can be like visiting four different places depending on when you go.  Spring is brightening, budding and hopeful.  Summer is lush, green and timeless. The fall urgently blazes.  And the winter, the most subtle of the four seasons, is serene but harsh with a low, sharp light.

So you may end up wandering on the back roads until you arrive at the excellently-named Pumpkin Hollow Road.  The road was named before today’s current obsession with all things pumpkin.  At this time, there is no proposal to rename it “Pumpkin Spice Hollow Road”.  But if the craze continues, it is possible that someone may think of renaming it.

Further west of the village center, the road crosses the Green River, near the town border with Egremont.  The current bridge is an unusual timber pony truss, constructed in 1999.  The bridge span is about 55’ feet.  The curving truss fits well at its site and it is a beautiful little bridge.  But it is strange to come across a curved timber truss highway bridge, especially considering that it is only 20 years old. How it got there has its own back story. 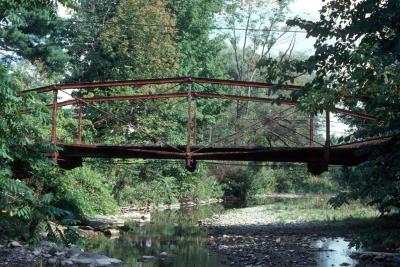 The current bridge replaced a lenticular truss built in 1888.  Before that, an earlier bridge washed out during a flood.  The iron lenticular truss was fabricated by the Berlin Iron Bridge company and it was one of many in the region at the time.  The bridge contract required the Town to provide abutments and timber planks for the deck.  The Berlin company provided the iron parts for the bridge. 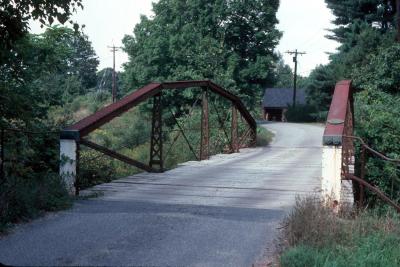 Lenticular trusses have an egg-shaped configuration that is structurally efficient.  The parabolic shape matches a simple bending curve.  Since the top and bottom chords of a truss resist bending by forming a couple between compression and tension forces, the lenticular shape results in a relatively uniform axial force distribution in the members.  This helps with standardization of member sizes.

The Pumpkin Hollow Road Bridge was a smaller example of the lenticular truss form.  Some larger bridges, such as the impressive Aiken Street Bridge in Lowell, are still in service.  But overall, most old lenticular truss bridges have been retired or sent to the scrap heap.

Like covered bridges, old truss bridges provide a snapshot of time in American industrial development.  The 19th century New England landscape featured farms and small industrial cities.  To support industrial growth, transportation networks expanded and the cities and towns bridged local streams and rivers.  The Berlin Iron Bridge company fabricated hundreds of bridges, mostly out of iron, later out of steel.  The company had a patent for lenticular trusses and used its prefabricated approach to sell bridges to towns around New England.

With time, manufacturing migrated south of New England and offshore.  In the post-industrial landscape, many old truss bridges still remain.  When the Pumpkin Hollow Road truss reached the end of its service life, it was time for a replacement bridge.  Instead of opting for a standard bridge, planners and engineers settled on the unusual and interesting timber truss that now graces the site. 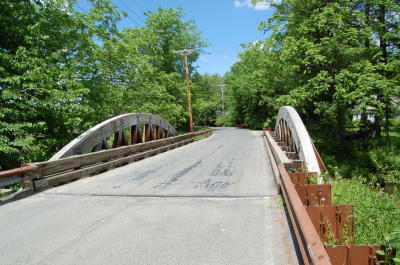 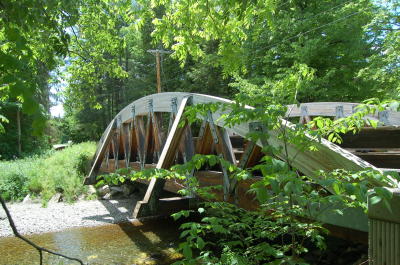 Unlike a generic and nondescript modern highway bridge, this startling timber truss evokes memories of the past.  When you encounter the bridge, for a moment you can be transported both across the river and back to a different time.