This website requires certain cookies to work and uses other cookies to help you have the best experience. By visiting this website, certain cookies have already been set, which you may delete and block. By closing this message or continuing to use our site, you agree to the use of cookies. Visit our updated privacy and cookie policy to learn more.
Home » Blogs » Crossing That Bridge When We Come To It » The Junction of State Route 27 and US Route 1

The Junction of State Route 27 and US Route 1

US Route 1 was the primary eastern seaboard interstate highway before the interstate highways were built.  It extends from the Quebec border in Maine south all the way to Key West in Florida.   The overall route received its numerical designation in 1922.

South of Boston, Route 1 is locally known as the Providence Highway.  It was the major connecting road between Boston and Providence until construction of Interstate Highway 95 in the mid 60’s.  Unlike the limited access design of I-95, Route 1 south of Boston is mostly a collector-distributor type roadway.  Immediately south of its junction with Route 128/ I-95 in Dedham, the road has a short stretch of partial limited access.  But mostly, the road has signalized intersections about every ¼ mile or so.  A jersey barrier concrete shape separates NB and SB lanes, and thus restricts traffic crossing and turning movements.  These may only be done at the signalized intersections.  As a result, the intersections tend to be somewhat monumental with signal moves and timing that can be interesting and challenging for the traffic engineers to design.  The barrier separation continues as far south as Gillette Stadium in Foxborough.  Beyond that, the four lane highway has a double yellow stripe separating the traffic.

Unlike sleek I-95 which runs just to the east, Route 1 traverses an array of suburban businesses, including strip malls, office parks, some stand-alone restaurants and small hotels.   The businesses are set back from the highway with large parking lots.  Drives are invited to visit by large and often garish signs.  The businesses tend to be separate from each other and are not coordinated in their design features, layout and traffic access (other than to get on or off Route 1).

The northern extent of the highway is dominated by automobile dealerships.  This is the famed Massachusetts “automile”, which provides shoppers with access to many different brands all adjacent to each other.   Further south, there is a trampoline store, many strip malls, parking lots everywhere, and the assorted bric-a-brac and flotsam of sprawl.  Recently, the highway corridor has been upgraded a bit.  Some of the more worn out plazas have been replaced with nicer offices and stores.  A motel offering hourly rates has been replaced by a new mini-Marriot.  But even with the recent improvements, the overall vibe driving down US 1 is that it is time to party like it’s 1969.

One of the larger intersections is at the junction with State Highway 27 in Walpole.  Route 27 is not as impressive as Highway 1, but it is still a significant local arterial road that loops around Boston.  At the intersection, Route 1 has two lanes in each direction and separate turning lanes.  Route 27 is a two-lane highway, but it widens out at the intersection with additional lanes and turning lanes.  As a result, the crossing is a wide and impressive mass of asphalt. 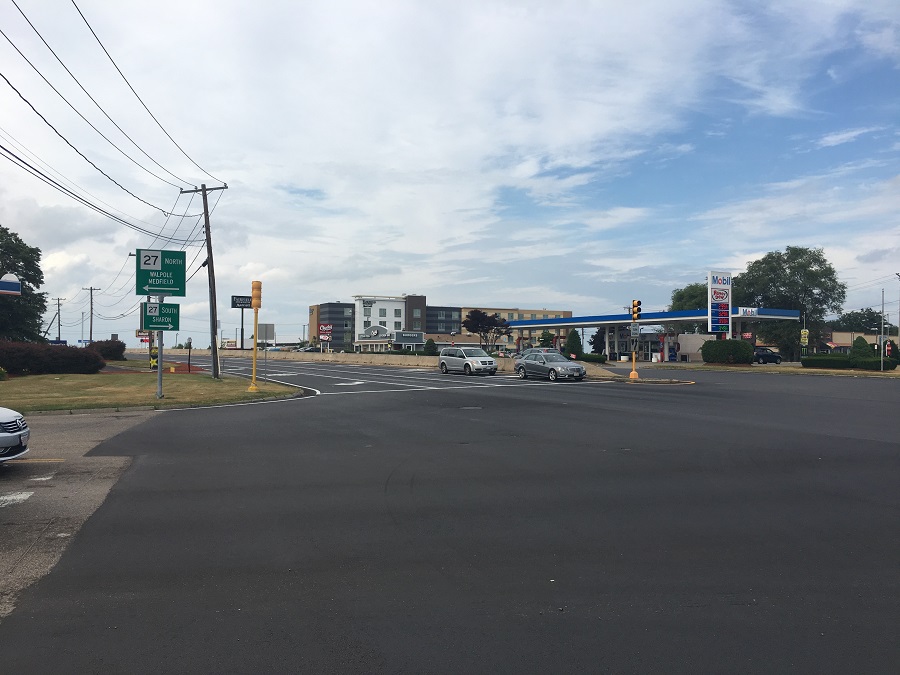 Sea of pavement.  Photo by author.

The traffic signals have four overall phases for the main moves and separate turns.  The phase lengths and combinations vary a bit during the day depending on the time and rush hour considerations.  The primary traffic is to the north towards Boston in the morning, and back south in the evening.  But the site is about halfway between Boston and Providence, so there is a secondary and significant flow in the opposite direction counter to the Boston rush hour traffic.  Nearby I-95 has a full interchange off Route 1 to the south, and a partial interchange near Route 27 to the east.  These interchanges provide commuters access to Boston to the north and Providence to the south, and this adds a lot of traffic to the Route 27- Route 1 junction.

The junction has many businesses lining both roads.  On the immediate corners are two gas stations (Gulf and Mobil) to the north, an “Applebees” restaurant to the southeast, and a Starbucks coffee shop to the southwest.  Also on the southwest quadrant is a medium-sized shopping plaza with a supermarket and acres of parking pavement.  Marriot built a new Fairfield Inn immediately north of the intersection.  The Inn overlooks the parking lagoon of the Walpole Walmart which is constructed in a large pit to the northwest below the hotel.

The Starbucks has a suburban layout geared to auto customers.  Walking to this store is difficult.  A drive through roadway loops around the store and is usually packed in the morning.  Shop windows look out on parking and cars in all four directions.  The store is on an island in a sea of pavement.  The shop has an outdoor patio which overlooks the massive intersection and streaming traffic on Route 1 and Route 27.  A metal fence separates the patio from the extent of pavement, in an attempt to create the feeling of an outdoor room.  The patio view is not of Venice or the Canadian Rockies.  Coffee patrons sipping their lattes outside must actively ignore the streaming traffic and fumes a few yards from the patio.

From a certain vantage point, the Applebees restaurant looks like it is set back in the wilderness.  Behind the restaurant are woods.  This undeveloped land is hemmed in by I-95 not too far to the east, and if you use your imagination, you can see yourself on the edge of the frontier (this assumes that the edge of the frontier has a chain restaurant).  A sign in front notes that it is a “neighborhood” restaurant, but this designation also takes some imagination.  There is no neighborhood to speak of here.  The restaurant is set back in its parking lot and cutoff by Routes 1 and 27.  Surrounding buildings are separated by the highway and pavement, and do not create outdoor urban spaces. 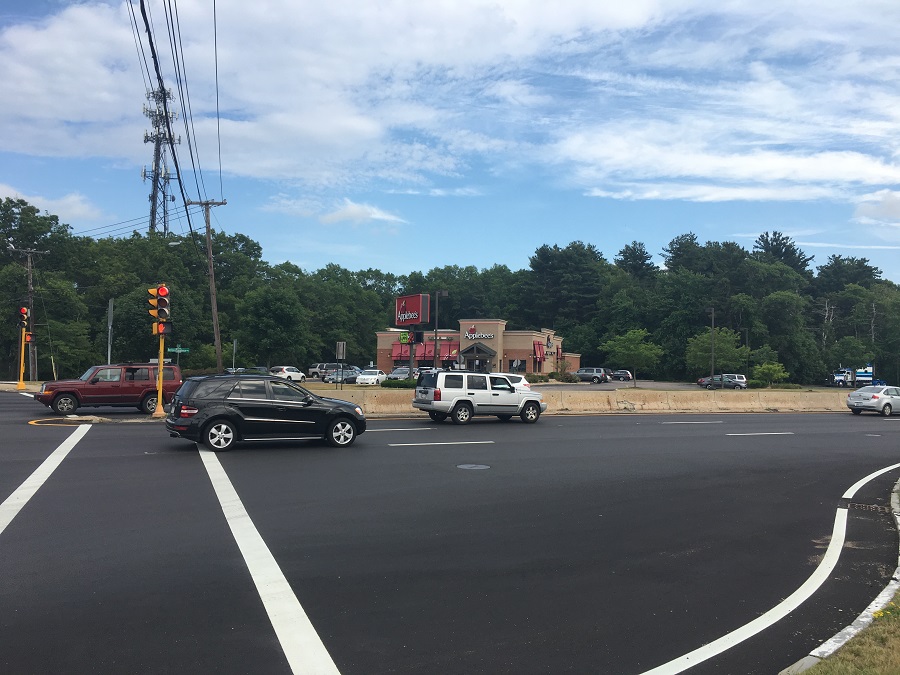 Applebees with backdrop of woods.  Photo by author.

Both gas stations are relatively new and feature higher order construction for this type of facility.  The gas stations both have convenience stores attached.  The Gulf station sells beer and wine.  The Mobil station has a Honey Dew donuts shop, which possibly competes with the Dunkin Donuts shop next door.

The new Fairfield Inn was shoe-horned into a narrow parcel just to the north of the intersection.  Inside the hotel is well designed and furnished.  The Inn has some nice landscaping not in keeping with the overall theme of the wind-swept pavement surrounding it.  Patrons of the Inn are required to drive everywhere.  The expanse of Route 1 and surrounding parking lots essentially precludes walking, with the exception of the fast food restaurant next door.  The hotel has a path to the restaurant, but apparently the pedestrian access dead-ends there.  Further north, there are no sidewalks along Route 1. 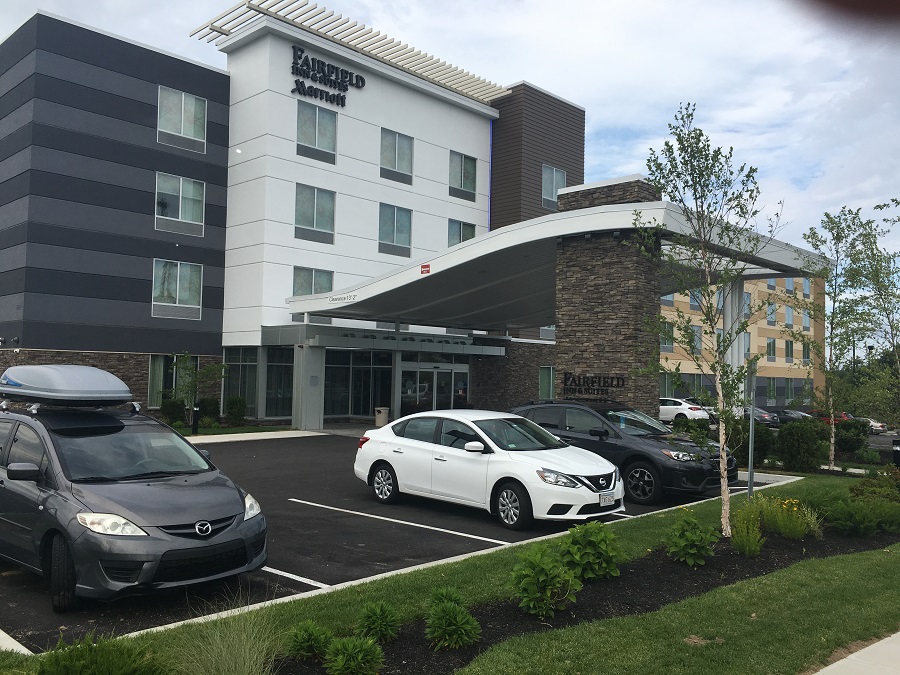 Outside the hotel.  Photo by author. 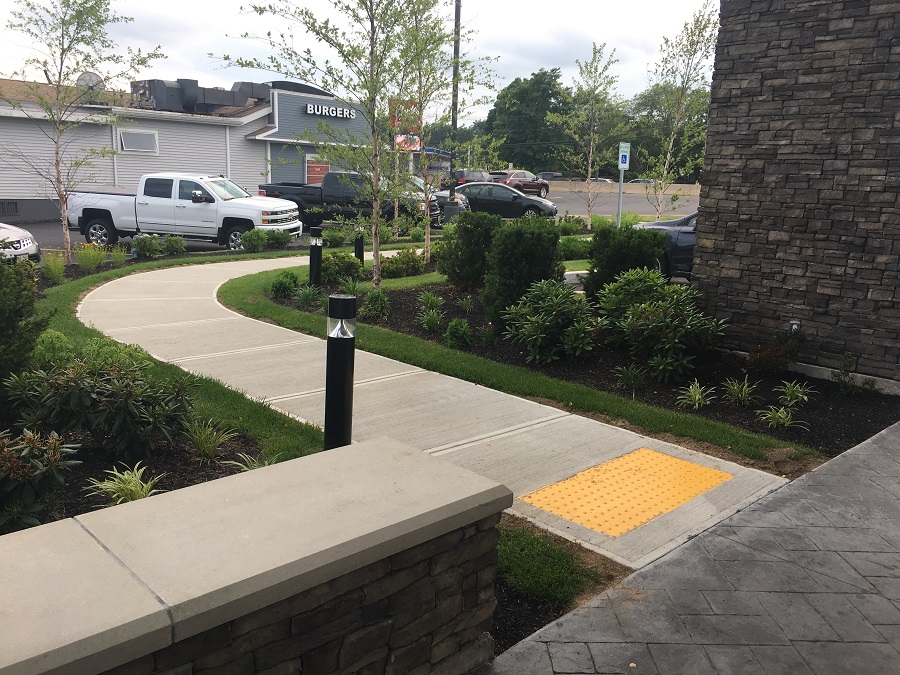 Path to restaurant.  Route 1 NB in the background has no sidewalks.   Photo by author.

Walking to Applebees or Starbucks should take about five minutes.  Instead, hotel guests are expected to drive about a half a mile to and back from a signalized crossing to the north.  Ironically, the drive can take twice as long as the walk, if it was practical to walk.

As at the hotel, landscapers were challenged to come up with border plantings at the four corner businesses.  The gas stations settled mostly on plots of grass and flowers.  The Applebees restaurant has a little more turf to work with as it is set back from the highways.  The plantings are standard suburban for the New England climate, with evergreen shrubs and easily maintained plants.  Starbucks landscapers had the toughest assignment.  The store is geared towards parking and driving.  What little area remains for planting are narrow strips separating Routes 1 and 27 from the parking pavement.  The resulting planting design is a nice mix of grass, shrubs and hardy annual flowers. 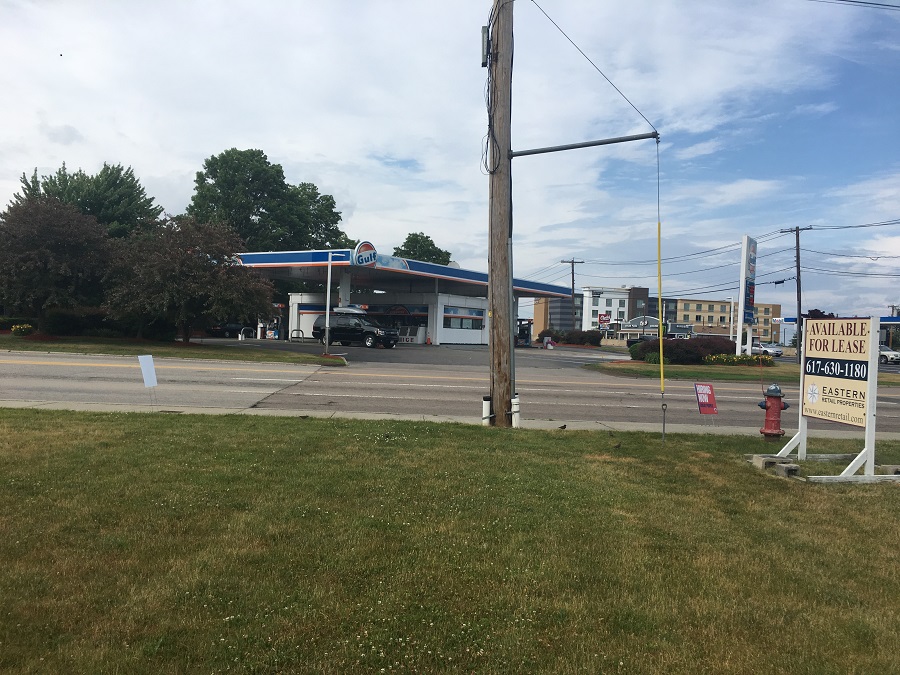 Overall, the individual landscapers did well, but the assignment itself was difficult to succeed at, since it is mostly narrow strip landscaping intended to give some viewing solace to the otherwise incoherent space.  Butchart Gardens this isn’t.

The individual facilities at the four corners of the intersection appear to be well-designed and constructed.  The Starbucks shop is a pleasant space, which in late June 2018 is undergoing a major renovation.  Both gas stations are functional and attractive in their way.  The restaurant is quite nice inside.  But as a place, the intersection of Routes 27 and 1 is a lot less than the sum of its parts.  Individual designers and constructors did a good job creating infrastructure within the parameters of the individual requirements of their sites.  But the place as a whole is unpleasant, generates more traffic than is necessary, and is not somewhere to visit.  The needs of vehicular movements above all else, combined with land use planning that has limited requirements for overall site coordination, result in the built mish mash of the intersection.