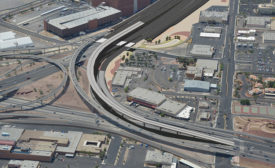 Winning bid beats runners up on cost and time for the 3.7 mile I-15 widening project that includes the downtown “spaghetti bowl” interchange
ENR Southwest
One Comment
The Nevada Department of Transportation kicked off the largest construction project in state history earlier this month when it named Arizona-based Kiewit Infrastructure West Co. the design-build contractor for Project NEON, the 3.7-mile widening of Interstate 15 between Sahara Avenue and the “Spaghetti Bowl” interchange in downtown Las Vegas.
Read More

ENR Southwest
No Comments
Construction job totals fell in Arizona and New Mexico but continued to be the fastest growing sector in Nevada over the past year, according to data recently released by the three states.
Read More

The job market in the Southwest is looking much better than it did a year ago, with Arizona, New Mexico and Nevada all showing employment growth year-over-year when comparing June 2015 to June 2014 according to numbers provided by the U.S. Bureau of Labor Statistics.

McCarthy Building Cos. has promoted Jeff Wood to vice president of operations at its Las Vegas office.

Nevada is leading the way in construction employment again in April, according to statistics recently revealed by Nevada Department of Employment, Training and Rehabilitation, outpacing gains not seen in Arizona since 2005 and lackluster growth in New Mexico.

Tom Case has been named senior vice president in the civil group for Sundt Construction in Tempe, Ariz. Case, who is also chairman of the Highway & Transportation Division for the Associated General Contractors of America's board of directors, is charged with expanding the firm's portfolio as well as its geographic reach.

ENR Southwest
No Comments
The construction sector began to show signs of life at the end of 2014 and those trends remained steady for the most part across the southwest in February of 2015. There were gains of 4,000 jobs relative to last year across the three state region according to data provided by the U.S. Bureau of Labor Statistics. Related Links: Southwest Construction Employment Is Strong Year-Over-Year, But Hits Speed Bump In January Arizona and Nevada both saw growth compared to February of last year, with New Mexico being the only state of the three to post a loss in the construction sector.
Read More

ENR Southwest
No Comments
Construction employment across the Southwest dipped by 3,400 jobs in January compared to December, led by a month-over-month decline of 1,800 construction jobs in Nevada, a loss of 1,700 jobs in New Mexico and tempered by a very moderate gain in Arizona, according to data by the states and the U.S. Bureau of Labor Statistics.In the three states that comprise the Southwest, preliminary statistics reveal there were 230,400 working in the construction industry in January 2015, compared to 233,800 in December 2014.While the month-over-month totals show a decline, year-over-year construction employment in the Southwest states has increased by 6,900, once
Read More

Gensler has named Dawn Hart as an associate and workplace sector leader.