National Marine Dredging Co., a United Arab Emirates-based marine contractor, has won a $272-million contract to dredge a section of the Suez Canal where the Panamanian container ship Ever Given ran aground more than a year ago.

Firm Group CEO Eng. Yasser Nassr Zaghoul announced the recent award in Egypt, dredging from km 122 to 132, in a filing to the Abu Dhabi Securities Exchange, without giving details on the start date.

Zaghoul said the project “is expected to be completed during 2023," but did not elaborate on the dredging equipment or staging approach that the contractor will use. The project will extend the canal's dual-lane capacity in its southern portion from 72 km to 82 km.

The section of the canal between the 122 km marker and the 132 km marker came into operation in 2015 after construction by a consortium led by the company that created a new, 34-km-long canal parallel to the current channel after dredging 200 million cu meters of sand with a cutter suction dredger. Other consortium members on that effort included Dutch dredging and heavy-lift company Royal Boskalis Westminster N.V., Dutch maritime contracting firm Van Oord, and Belgian family-owned dredging contractor Jan De Nul. 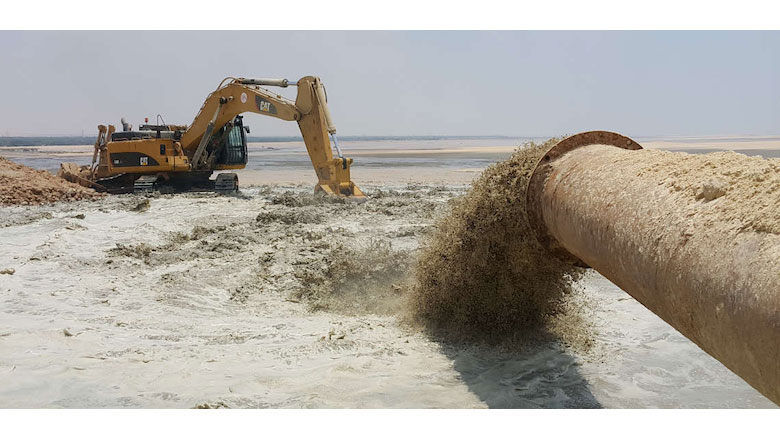 National Marine Dredging's new dredging project is part of the Suez Canal Area Development project, an ongoing drive by the Suez Canal Authority, the state-owned operator of the waterway, to expand and deepen it to accommodate larger ships and improve traffic safety.

Further along the canal, SCA is expanding a 30-km-long segment on the southern part of the Suez Canal between the 132 km and 162 km markers by widening it 40 meters to the east as well as deepening it to 72 ft from the current 66 ft. The project will increase navigational safety by 28% and add capacity for six more ships, according to SCA.

The additional length, width and depth of the Suez Canal will help reduce the transit time of vessels through the waterway and hence the total cost of the ships’ entire trip with vessel numbers expected to increase from 49 per day reported in 2014 to 97 vessels per day by 2023. Waiting times at the anchorage area for transiting vessels will also be minimized.

Factoring in these upgrades and the rising volume of world trade, SCA projects revenue from the canal will increase from $5.3 billion in 2014 to $13.2 billion by 2023.

Quelling Rumors of Selling the Canal

Meanwhile, Egypt has denied media reports that the government is considering selling the Suez Canal to international waterway operators.

House of Representatives Speaker Hanafy El-Gebaly clarified that a bill that was passed by Parliament earlier this month that establishes a fund to boost the Suez Canal’s financial standing does not have a clause allowing the sale of the global trade waterway.

“According to Article 43 of the constitution, the Suez Canal is a public asset that the State should develop and not sell and that Parliament will not do anything that does not go in line with the constitution,” he said.

El-Gebaly said the bill’s objective is “to set up a find to develop Suez Canal’s financial resources in terms of establishing companies that will put the Suez Canal’s assets to an economic use.”