As the 117th Congress headed into its final days, infrastructure advocates scored another legislative victory with bipartisan congressional approval of a new Water Resources Development Act, or WRDA, authorizing $37.8 billion in federal funds for 30 new or modified U.S. Army Corps of Engineers storm protection, harbor dredging and other civil-works projects.

Final congressional approval came Dec. 15, when the Senate passed a combined WRDA-Defense Dept. authorization package on a strong 83-11 vote. The House had cleared the bill seven days earlier, by 350 to 80. President Joe Biden signed the new WRDA/Defense measure on Dec. 23.

By far the largest single project in the bill is a huge storm protection and ecosystem restoration program on the Texas Gulf Coast. Its WRDA federal-funds allocation is $21.4 billion. Nonfederal funds boost the total cost to an estimated $34.4 billion.

John Doyle, special counsel with law and lobbying firm Jones Walker LLP, says, “A $3-billion project is a mammoth project in the Corps world. This one’s an order of magnitude larger than that.” Moreover, says Doyle, a former top Army civil-works official, “It is a major, major precedent. I believe we’re going to be seeing more of these [coastal megaprojects] as climate change and sea-level-rise issues continue to be recognized.”

The largest new navigation project authorization in the bill is $2.4 billion for further dredging in the New York-New Jersey Harbor. That project’s total price tag is $6.3 billion.

There is a significant caveat attached to the WRDA funding: Its authorizations are subject to annual appropriations, which have lagged far below the multibillion-dollar authorizations laid out in past WRDAs.

Besides the funding, the new WRDA has policy-related provisions. One key policy section would make permanent a 2020 change in the cost-sharing formula for Corps inland waterway construction projects to 35% from the general fund and 65% from the Inland Waterway Trust Fund. The old formula was a 50-50 split between the general and trust funds.

The 35-65 split would allow the trust fund dollars to help finance more projects than under the previous 50-50 cost sharing. The 2020 WRDA instituted the 65-35 change, but only for 10 years.

Maria Lehman, president of the American Society of Civil Engineers, praised the cost-share language, as well as other provisions, including a reauthorization of the National Levee Safety Program and authorizing the Corps to include resilience elements when it does emergency repairs on hurricane or shore protection projects. 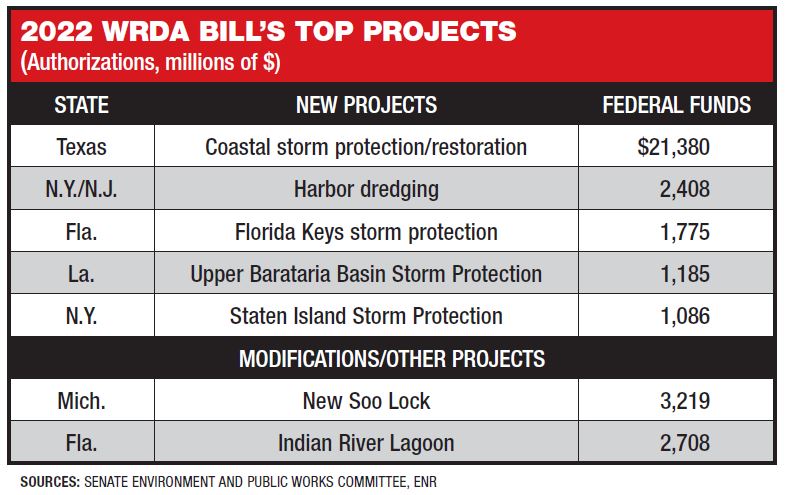 The signing of the WRDA by year end also would continue the recent pattern of enacting a water resources bill every two years. Industry officials welcome the assurance that biennial bills provide. Michele Stanley, National Stone, Sand & Gravel Association vice president of government and regulatory affairs, said WRDA’s approval “creates certainty and funding with project planning, which is necessary to supply the building materials for these vital water projects.”

The DOD section of the overall package authorizes a total of $858 billion, including $19.5 billion for military construction. A Senate Armed Services Committee summary says that includes a hike of $7.3 billion over Biden’s requested level to “address unfunded requirements, cost to complete and market adjustment funds due to inflation.” The DOD funding, however, is also subject to appropriations.