The Oregon Dept. of Transportation began its multi-phase Interstate-205 corridor improvements project near Portland this summer with the start of a seismic upgrade to the 2,727-ft-long Abernethy Bridge. The program’s three-year, $495-million first phase, being led by Kiewit Infrastructure West, calls for drilling new 12-ft-dia. drilled shaft foundations 200 ft below the water surface.

The first phase also includes widening the bridge to accommodate additional travel lanes in each direction, improving two I-205 interchanges and installing a sound wall. Subsequent project phases over the next six years will upgrade or replace eight other bridges in the 7-mile corridor, enabling I-205 to serve as a passable north-south route through the Portland region to provide access and support emergency response activities after a major earthquake.

With more than 100,000 vehicles using the I-205 corridor on a daily basis, the improvements project also aims to address congestion and safety issues through the addition of a third travel lane in each direction, and interchange improvements. While the program’s first phase is fully funded, the transportation agency is considering installation of tolls in the corridor to help pay for the remainder of the work. 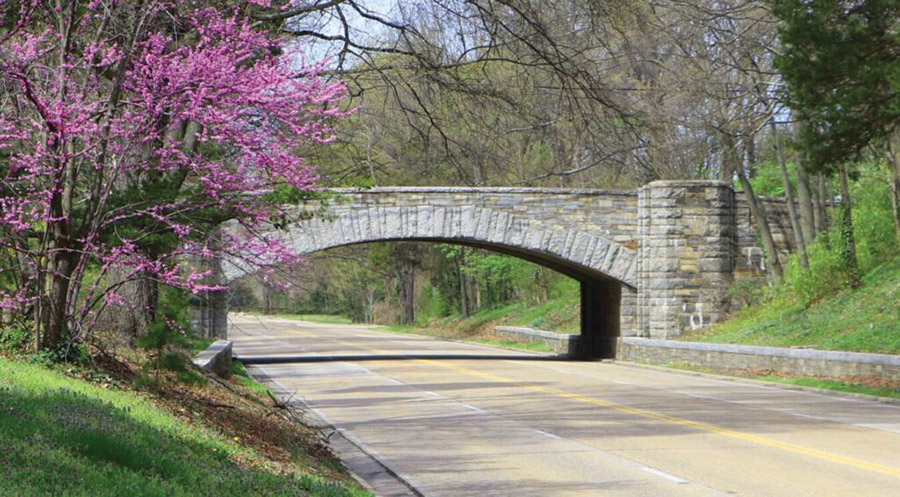 Since its 1962 completion as part of a scenic drive overlooking the Potomac River in the Washington, D.C., area, the 7-mile northern section of Virginia's George Washington Memorial Parkway has doubled as a commuter route serving 26 million drivers annually. Set to finish in late 2025, a $161-million major rehabilitation project includes replacement of asphalt pavement and roadway drainage systems, redesigned State Route 123 interchange elements, lengthened entrance and exit lanes at other interchanges and stormwater management system repairs, all while retaining and reviving the roadway’s historic beauty and significance.

State I-95 Stretch Is Set for Upgrade

Three separate widening projects totaling nearly $1 billion are underway for the first major upgrade in nearly 50 years for the 24-mile stretch of I-95 south of Fayetteville, N.C. Along with doubling the four-lane highway's capacity with two new travel lanes in each direction, the projects will upgrade exits, new bridges and other safety and storm resilience upgrades. Projects are expected to complete in 2026.

$140.3 Billion
Total value of transborder freight moved in North America in August 2022 by all modes of transportation
Source: U.S. Bureau of Transportation Statistics

A multidecade $762-million program to relieve congestion along U.S. Route 101 in Marin and Sonoma counties began its last project in July, with groundbreaking for a six-mile section near Novato. Set to finish in 2026, the $135-million California Dept. of Transportation project will add 16 miles of carpool lanes in both directions, add frontage roads and raise the highway out of the floodplain.

Construction is scheduled to begin early next year on the Kansas Dept. of Transportation’s first express lanes project. Located in Overland Park, the $570-million design-build effort will add about nine miles of tolled lanes, replace 50-year-old pavement, construct 11 noise walls and improve three interchanges. The express lanes are expected to open in late 2025, with the entire project set for completion in 2026.

The $49-million first phase of a design-build project to replace an existing 2.5-mile elevated monorail with a 10-mile people-mover system using autonomous vehicles has begun, says the Jacksonville Transportation Authority. The Bay Street Innovation Corridor, which will link downtown and area neighborhoods in a 3-mile at-grade loop, will incorporate advanced mobility technologies.