Canada is forging ahead with plans to build the nation’s first small modular reactor (SMR). The Canada Infrastructure Bank will provide $717 million in financing to pay for a range of work needed to prepare for construction of the 300-MW nuclear power unit at the site of Ontario Power Generation's existing 3,500-MW Darlington nuclear generating station near Toronto.

Construction would start in late 2024 or early 2025, with planned opening in 2028. Its final price tag could run into the billions. The utility also plans to roll out up to three additional SMRs, it said.

Ontario Power now is hammering out agreements with a project contractor and design firm, both of which Gary Rose, Ontario Power vice president of SMR growth, declined to name. Contracts could be signed by the end of the year.

The utility chose GE Hitachi BWRX-300 technology, described as a 300-MW water-cooled, natural circulation SMR. SaskPower also said it would use the technology for a reactor planned in Saskatchewan in the mid-2030s.

In the U.S.,Tennessee Valley Authority said in its third quarter earnings report that it reached agreement with GE Hitachi to use BWRX-300 technology for its first SMR, to be built near Oak Ridge, Tenn.

It will be a model for others TVA aims to be develop, President Jeff Lyash told the Atlantic Council in Washington, D.C., late last month. “I’m interested in 20 reactors, maybe more,” he said, noting that power demand in TVA’s seven-state region is set to rise at least 50%, maybe 100% by 2050. The BWRX-300 reactor is the 10th evolution of the boiling water reactor, said GE Hitachi. 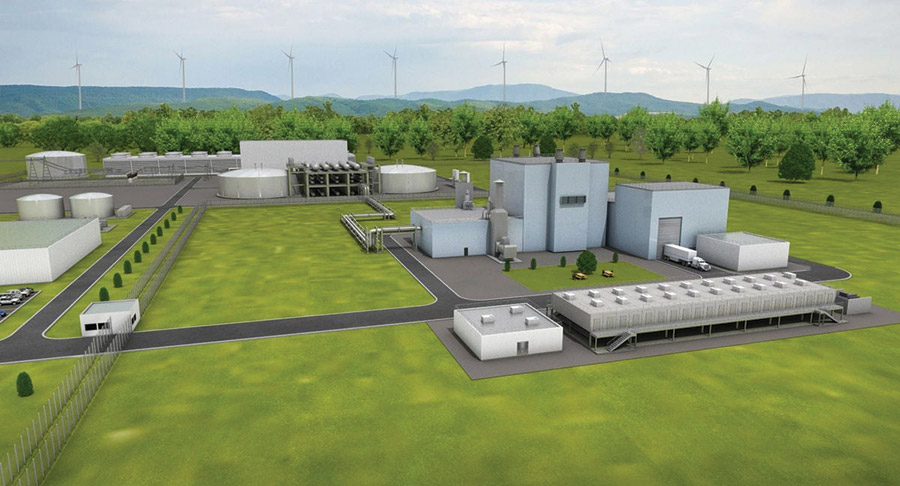 Nuclear energy developer TerraPower and utility Pacificorp said Nov. 2 they may build five more Natrium advanced sodium-cooled fast reactors with energy storage by 2035. TerraPower said last year it would build a natrium demonstration plant at a Wyoming coal-fired power plant set to be retired in 2025. With storage, each reactor could generate up to 500 MW of energy. The firms will review commercial reactor locations near current fossil fuel generation sites, which would allow use of existing transmission. Natrium reactors are a joint TerraPower and GE Hitachi technology. Bechtel is designing and building the demonstration project, funded in part by an $80-million U.S. Energy Dept. award.

Virginia utility firm Dominion Energy is advancing project design and other preconstruction activities to reduce risk on its 2.6-GW offshore wind project, and expects to have 90% of project costs fixed by the end of Q1 2023. Construction would be completed by 2026. Dominion, the state, Walmart, Sierra Club and Appalachian Voices reached a deal Oct. 26 to resolve regulators' call for a performance standard requiring the utility to cover costs of buying replacement power if the $9.8-billion project does not reach 42% capacity, and pay for construction cost overruns. Dominion agreed that its shareholders would share 50% if the added cost is between $10.3 billion and $11.3 billion, and 100% of “prudently” incurred costs between $11.3 billion to $13.7 billion. It also would not have to guarantee power production levels. Dominion had threatened to scrap the project if it was held to a performance standard.

Maine regulators on Oct. 6 said they selected LS Power and wind power developer Longroad Energy to build a 100-mile, 345-kV transmission line to connect a proposed 1,000-MW onshore wind farm in Aroostook County near the Canada border to the New England power grid, but they left unclear how the project's $2- billion cost would be covered. The state stopped short of finalizing agreements with the firms to give owners time to find partners to help defray the cost, including Massachusetts, which is under pressure to obtain more renewable power. State regulators have until Dec. 31 to decide if the Maine project meets its criteria for renewable energy.