This website requires certain cookies to work and uses other cookies to help you have the best experience. By visiting this website, certain cookies have already been set, which you may delete and block. By closing this message or continuing to use our site, you agree to the use of cookies. Visit our updated privacy and cookie policy to learn more.
Home » Mapping Giant Esri Moves Further Into Design-Construction Space
NewsTechBuilding Information Modeling (BIM)Information technology
Technology

Last week, geographic information system and mapping technology provider Esri called upon attendees at its user conference in San Diego to use their geolocation and explanatory visualization skills to "map common ground."

It's the first major integration of 3D mapping data and BIM data between the two technology providers, and has provided the missing link for much building and transportation design work.

"Our world is a highly complex and interdependent ecosystem," Esri founder and president Jack Dangermond said in the conference's opening plenary. "Not just the natural world but also our human world."

Fourteen-thousand attendees showed up for what Esri called the "Mappiest Place on Earth," with roughly half from architecture, engineering and construction firms. 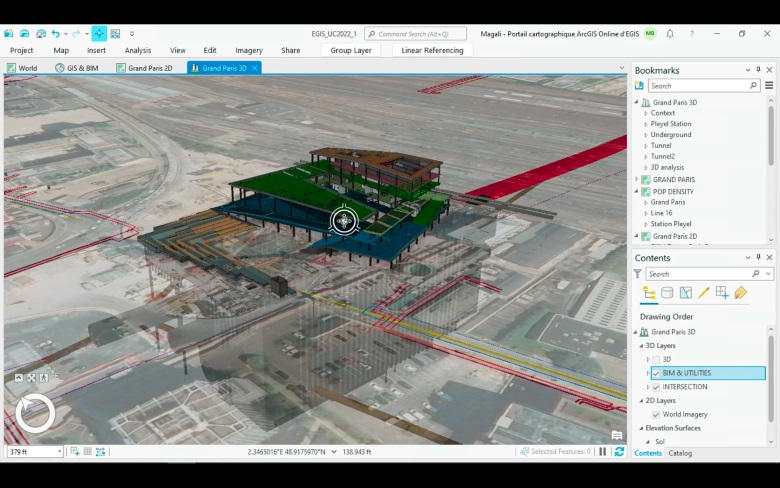 
Problems that keynote and plenary speakers tackled ran the gamut from climate change to traffic management to mapping the interior spaces of CERN's Large Hadron Collider.

But one area that kept coming up was bringing together GIS and AEC workflows, particularly ones using BIM. "GIS is moving into buildings, not only single buildings—hospitals, etc.—but whole campuses with space management and asset management," Dangermond said. "I’ll call your attention to [how] FEMA just published and released a map of buildings for every structure [over 450 sq ft]  in the U.S. as a web service—a phenomenal thing."

Engineer Egis, based in Guyancourt, France, is program manager for construction of the Grand Paris Express, a $42-billion redesign and reconstruction of four new lines of the Paris Metro and extensions of the existing Lines 11 and 14. The project includes 200 km of new rail, almost all of it underground, and 68 new Metro stations.

Vincent Keller, head of the rail digital rendering department at Egis, said the ArcGIS GeoBIM platform being used on the project has become the "single source of truth" to deliver all relevant views and dashboards for contractors and other stakeholders, allowing them to make decisions in a short time. It was also used to ensure data continuity from the site to the client to the BIM and to the GIS,” he said.

"We created a central online destination containing needed data for the more than 10,000 workers involved in the project," Keller said. "Each day, Egis and 70 collaborators on the project shared photos and data to a dashboard to document progress and help the client and project managers make data-driven decisions." 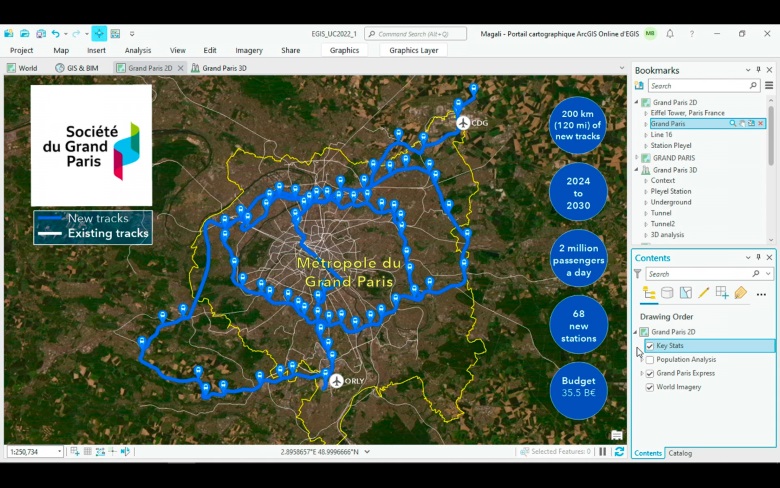 The first segment of the Grand Paris Express opened earlier this year. The entire project is expected to be completed by 2030.

Autodesk, Esri's partner in ArcGIS GeoBIM, took the stage to showcase its ArcGIS Connector for its InfraWorks application that takes geolocation data into InfraWorks for use in design. It works essentially as a one-way workflow version ArcGIS GeoBIM.

"It is important, when you look at the entire civil land development picture, [to have] that relationship, that partnership with Esri," said Jim Lynch, senior vice president and general manager of Autodesk Construction Solutions. "It strengthens our position in that space. We're all pleased with how that relationship has blossomed and has developed."

Arup Senior Analyst Samantha Lustado and a team of engineers Arup conducted interviews and group discussions with Burbank Water and Power, the Los Angeles Dept. of Water & Power, Southern California Edison and various city of Los Angeles departments and other stakeholders to identify challenges and opportunities around existing charging infrastructure and how to make LA more EV-friendly.

The Wisconsin Public Service Commission is using ArcGIS to to help decision-makers determine where broadband support is most needed in the geographically diverse state. Nearly half of Wisconsin's internet providers are contributing to the effort and data points from the state's 5.8 million residents are being used to establish a more holistic understanding of internet access and use, as well as to plan future spending on broadband infrastructure projects.

The U.S. Army Corps of Engineers Galveston District showed how Esri Story Maps are now its main tool for public outreach after a successful use of them during the pandemic for a major Houston flood protection project that started during the initial lockdown and quarantine efforts.

There is still much potential for Esri maps in the AEC space, especially in transportation, Dangermond told attendees. "Transportation is going real-time with road inspections and traffic counting. Engineering and public works are not only integrating information, there are now over 50,000 websites sharing hundreds of thousands of open data sites and maps doing the same thing."