A sweeping, bottom-up overhaul of the state of Texas’ flood control planning is underway as a result of a series of historic floods that have inundated the state over the past decade. When completed in 2024, the state’s Flood Control Plan will be a comprehensive assessment of the entire state’s flood risk and provide a prioritized list of vital projects.

Public meetings to develop the regional plans began in October 2021 and to date, more than 300 have been held with hundreds of written comments being collected. The draft regional flood plans are due in August with the final versions due next January. The regional plans will then be integrated into a final statewide flood plan, due Sept. 1, 2024.

A series of major flood events in the Lone Star State over the past decade proved the catalyst for the new flood plan. Multiple flooding events in 2015 caused 43 deaths and more than $1.9 billion in property damage and additional devastating floods occurred the next year.

Then, in 2017, Hurricane Harvey dropped more than 40 in. of rain on the southern coast around Houston in the span of days. That disaster claimed 68 lives, forced 39,000 people from their homes and the state amassed an estimated $125 billion in damages.

These disasters served as a wakeup call and prompted the Texas Legislature to take action. In 2019, lawmakers directed the TWDB to create the state’s inaugural flood program. In 2007, the agency took over the state’s National Flood Insurance Program, which had been in place for more than two decades.

The key difference with the state’s effort to create a comprehensive plan for flood control is the Legislature also provided funding to begin implementing those efforts.

“It's quite exciting from an industry perspective to see this this shift from not just the upfront flood risk identification, but really on the focus to the mitigation side,” says Krista Behune Melnar, who leads Fort Worth-based Freese & Nichols’ stormwater practice.

The state created a Flood Infrastructure Fund (FIF) in 2019 to provide financial assistance in the form of loans and grants for flood control, flood mitigation, and drainage projects. Voters subsequently approved a one-time appropriation of $793 million for the fund to be administered by TWDB. The fund can receive additional funds via legislative approval in the future.

As of late March 2022, the TWDB has committed $388 million in FIF funding to 119 projects statewide. After adoption of the first state flood plan in 2024, however, the TWDB may use the FIF only to provide financing for flood projects included in the state flood plan.

The flood control plan effort will produce detailed information on flood risk and mitigation analysis that should assist in efforts to request federal funds for projects and create a tool to better leverage those funds with state dollars through programs such as in the federal Flood Mitigation Assistance Program.

Like most other states, flood control efforts in Texas are directed by a hotchpotch of various local agencies. Since flood control was considered a local responsibility, each agency focused on flood control issues within its jurisdictional area, its access to funding and the ability to coordinate with federal agencies.

“The watersheds go from jurisdiction to jurisdiction,” says Melnar. “They don't respect political borders and so that can create complications.”

Typically, flood control plans are developed in a “top down” approach using the framework of existing federal and state regulations. The Texas flood control plan, by contrast, is being developed from the “bottom up” by focusing on the specific needs of the affected areas within the entire watershed.

To develop the statewide flood control plan, TWDB organized the state into 15 flood control regions based on the major river watersheds across the state. Each of the local agencies within any given region participated with the formulation of the corresponding region’s plan and stakeholder input has been sought over the past year and a half.

Each region is organized as a self-governing entity or Regional Flood Planning Group (RFPG), with each group comprised of representatives from water districts, flood districts, utilities and local governments. Agricultural and environmental interests are represented along with small businesses. 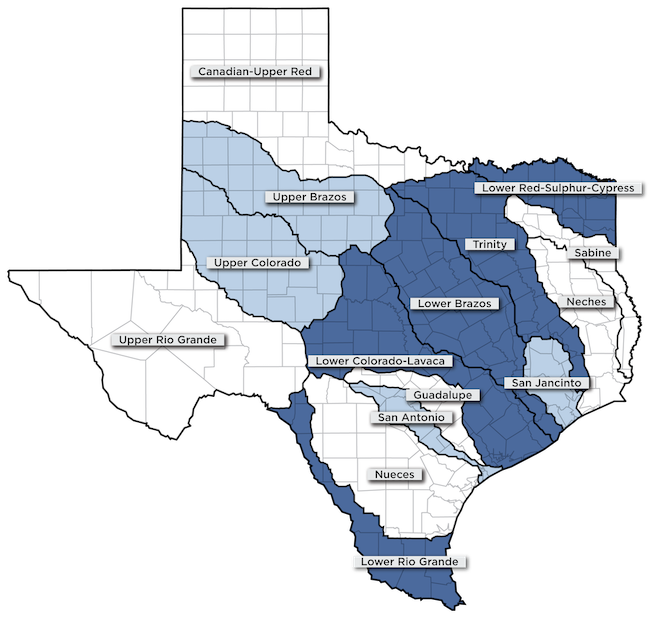 Courtesy of the Texas Water Development Board

Additionally, key state and federal agencies such as the Texas Soil and Water Conservation Board and the U.S. Army Corps of Engineers participated in the process as non-voting members.

These groups were tasked with identifying current flood mitigation strategies, evaluating local and regional flood control policies, and designating future flood mitigation projects. While the TWDB provides administrative support to the groups, each RFPG makes the decisions about the projects and infrastructure required for flood mitigation within its region.

By getting communities and agencies to work together, decisions made to mitigate problems in one part of the watershed cannot be made at the expense of those in another part of the watershed. The new flood control plan requires that any project’s approval is contingent on demonstrating there is no negative effect elsewhere in the watershed, Zoun says.

One of the first tasks for the groups involved was identifying existing infrastructure and ongoing flood mitigation projects. The next step was identifying flood risk while examining existing and future flood risk analyses. That effort was complicated by the surfeit of outdated or absent data. Typically, Federal Emergency Management Agency (FEMA) floodplain maps are more than a decade old and almost a quarter of the 254 counties across Texas lack any flood hazard information at all.

TWDB is working with FEMA and the United States Geological Survey (USGS) to develop an updated floodplain map for the entire state. By developing publicly available, up-to-date Base Level Engineering (BLE) datasets, more detailed and accurate flood mitigation efforts can be created. TWDB hopes to have updated floodplain mapping for the entire state available by 2024.

One key point is that the plan being devised will not suddenly redraw flood maps, throwing landowners into regulatory limbo. That information, Zoun explains, will allow for greater information about flood risk, particularly for areas currently lacking any such assessment.

“This is a planning effort. It doesn't have regulatory authority. It's not changing people's floodplain,” Zoun says. “What it’s doing is giving people more information about flood risk.”

Perhaps the most important aspect of the effort to produce the statewide flood control plan is that it also includes a commitment to replicate the process every five years moving forward. This ensures that the flood risk data remains up to date and that mitigation efforts can be amended as conditions and priorities change.

Still, Birdwell says, there is an enormous amount of work to be done in order to safeguard the state from future flood events.

“Maybe twenty years from now we can begin to get our hands around this issue,” he said. “I can only hope.”