Top Starts | Owner of the Year

Meeting the Water Needs of a Growing Texas Region

An enormous new lake is slowly emerging in rural North Texas—the first major reservoir constructed in the Lone Star State in almost three decades. When it reaches capacity next year, the Bois d’Arc Lake will encompass 26 sq miles and provide drinking water to more than 2 million residents of one of the fastest-growing regions in the nation.

The $1.6-billion project is being built by the North Texas Municipal Water District (NTMWD) as part of its efforts to meet the needs of its rapidly growing customer base in 80 communities. In addition to the construction of the two-mile, 90-ft-tall dam that created the lake, the project required building 11 miles of roadways with nine new bridges, 60 miles of pipelines, a water treatment plant and an ambitious mitigation effort.

The Bois d’Arc Lake program size and complexity is greater than anything the water district had previously delivered. It involved working with a program manager, 10 consultants, a design-builder, four construction management-at-risk (CMAR) contracts delivering 67 work packages and eight utility relocation agreements. In addition, nearly $70 million in contracts were issued to local contractors. 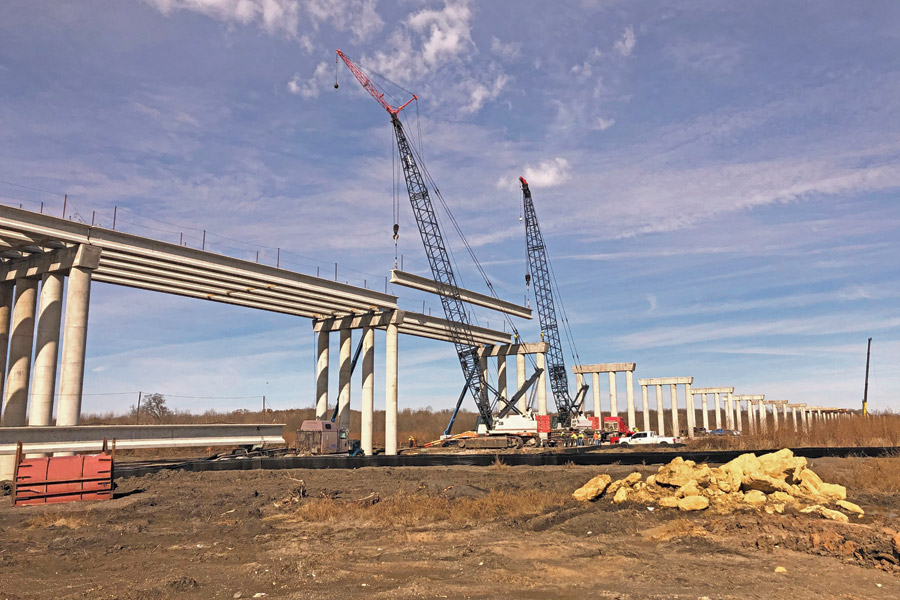 Austin Bridge and Road workers install girders for the FM 897 Bridge, one of nine built as part of the Bois d’Arc project.
Photo courtesy of the North Texas Municipal Water District

For this effort, along with numerous other concurrent programs, ENR Texas & Louisiana has named the NTMWD as its 2022 Owner of the Year.

“We are thankful for the strong working relationships with our contracting community, which are essential to live out our vision and to deliver on our mission of reliable, cost-effective services,” says NTMWD executive director Jenna Covington. “We look forward to a continuing future of partnership to meet the needs of the communities we serve in this thriving region.”

The reservoir has a projected capacity of 120 billion gallons of water. It began impounding water in April of 2021 and is currently about one-third full. The district plans to begin delivering water from the Leonard Water Treatment Plant next year.

“It’s just a great collaborative environment that [NTMWD] created with the contractors and designers. We’ve all got that common goal in mind.”
—Jeff Payne, Chief Operating Officer, Freese & Nichols

In the 1980s, NTMWD officials began the planning and permitting process that would eventually lead to the reservoir’s construction in the early 2000s. Even then, it was becoming apparent that the region was beginning to undergo a dramatic demographic shift that has only accelerated in recent years.

In the past five years, the population of North Texas has surged by 650,000 people, and the epicenter of the resulting housing boom has focused on the band of suburbs to the north and east of Dallas. These include the fast-growing cities of Frisco, Plano and McKinney, which are part of the water district’s service area.

Fort Worth-based Freese & Nichols has been intimately involved with the project from its earliest stages. The company assisted the water district with the initial planning and cost estimates and then took over as the project manager when funding and permitting were obtained. The firm handled a great deal of the design effort as well as management and assistance with required permitting. 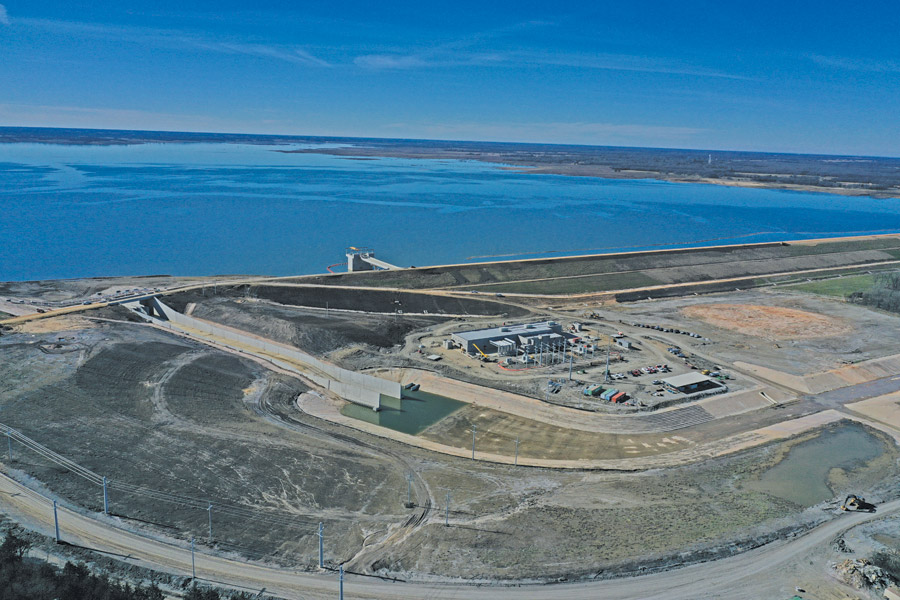 Given the sheer size of the Bois d’Arc program as well as its definite start and end point, it made sense to bring Freese & Nichols on board to help the district handle it, explains Cesar Baptista, the deputy director of engineering for NTMWD.

“They had all the expertise, mechanical, electrical, civil, [and] they had some environmental permitting, construction management services, inspection services,” he says. “They provided a full range of services that was able to meet the project’s needs.”

The arrangement also freed up the district to handle the additional $1.8 billion inventory of projects it had undertaken over the last five years while the Bois d’Arc effort was in full swing. 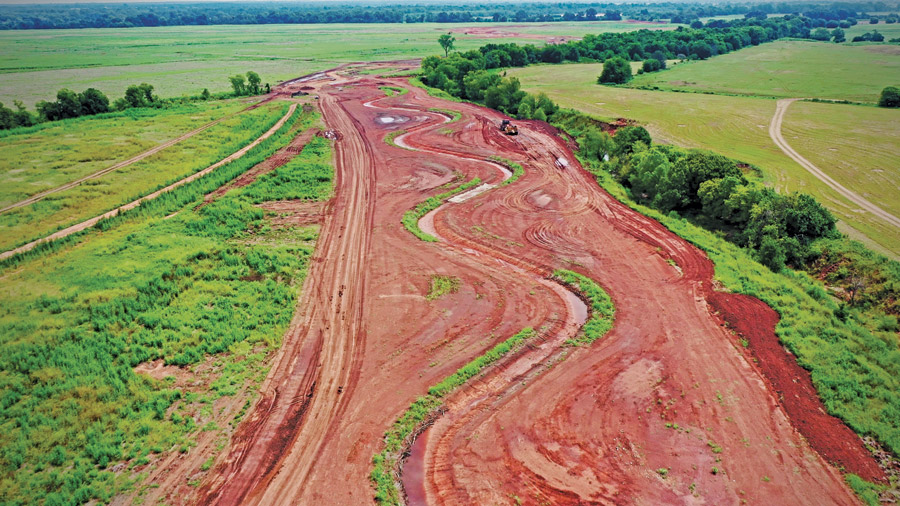 Approximately 17 miles of the Willow Branch Creek and its tributaries were restored and enhanced by Resource Environmental Solutions as part of the Bois d’Arc mitigation efforts.
Photo courtesy of the North Texas Municipal Water District

Jeff Payne, Freese & Nichols’ chief operating officer, has worked on the project since the beginning. He was part of the team that helped NTMWD navigate the permitting phase and led the effort when the district named the firm the program manager. He attributes the project’s success to establishing a core team early on and continuing to develop its expertise over the life of the project.

“One thing that has been rewarding for us from a consultant standpoint is that we’ve had a seat at the table,” he says. “It’s just a great collaborative environment that they created with the contractors and designers. We’ve all got that common goal in mind.”

That groundwork was crucial when the decision was made to utilize the CMAR delivery process for four of the reservoir-related contracts. Archer Western handled the dam construction and associated works, Austin Bridge & Road built the new roadways and bridges and Garney Construction of Kansas City, Mo., built the almost 60 miles of raw water and wastewater pipelines as well as the Leonard Water Treatment Plant. Houston-based Resource Environmental Solutions (RES) handed the environmental mitigation as a full-service provider.

“[CMAR] allows the contractor to on-board during the preliminary design and work concurrently with the designer and the owner to provide value engineering, constructibility reviews as well as scheduling and development of work packages,” Covington explains. “This early involvement provides a stronger understanding of the project goals [and] risks and assists in the development of plans to mitigate those risks. In the long run, it reduces costs, provides enhanced quality and allows for expedited delivery.”

“For the district to do an about face and go with a full-service delivery contract was a testament to their team and their choice of a program manager.”
—Matt Stahman, Regulatory Director, RES

Archer Western program manager Jeff Polack praised the district’s clear vision and communication efforts as the elements for a successful working relationship. The company has performed many other water and wastewater projects for the district, including the Wylie Plant 4 Expansion and Wilson Creek Wastewater Treatment Plant Improvements.

“They seem to really understand construction,” Polack says. “They know what they want; they provide good sound decision-making and direction.”

The district employed a two-stage CMAR selection process where firms were first evaluated on the technical merits of their proposal; shortlisted firms were then interviewed to fully evaluate how they would work with the district and the other contractors involved with the program.

“We were very cognizant of the importance of personality and if they were going to be a good fit on the team,” Baptista says. “They’re all obviously big contractors. And they’re very technically capable. We wanted somebody that would play with all the other team players.”

In almost every case, the district had extensive experience with the companies to draw on as part of the evaluations. Once the contractors were selected, they were brought on board to fully develop the designs and schedules for their portion of the project. The process wasn’t simply to flesh out the program, Baptista says, but to evaluate risks and devise strategies to either avoid them or mitigate them to a manageable level.

Additionally, the district poured resources into managing projects, with about 30 people handling project management and approximately 45 on the construction inspection staff, Baptista says. That enhanced responsiveness to contractor concerns and issues and ensured the district was completely up to date with the status of the project.

“Everything is reliable,” Payne says. “When they say something’s going to get done, it will be done.”

The mitigation involves a restoration initiative for 17,000 acres of land that will include new trees, wetlands and grasslands with native plants. Environmental enhancements involved the restoration of approximately 17 miles of the creek and tributaries, planting more than 5 million trees, restoring/enhancing over 8,500 acres of wetlands, enhancing/restoring 70 miles of existing streams and planting approximately 3,200 acres of native grasslands. 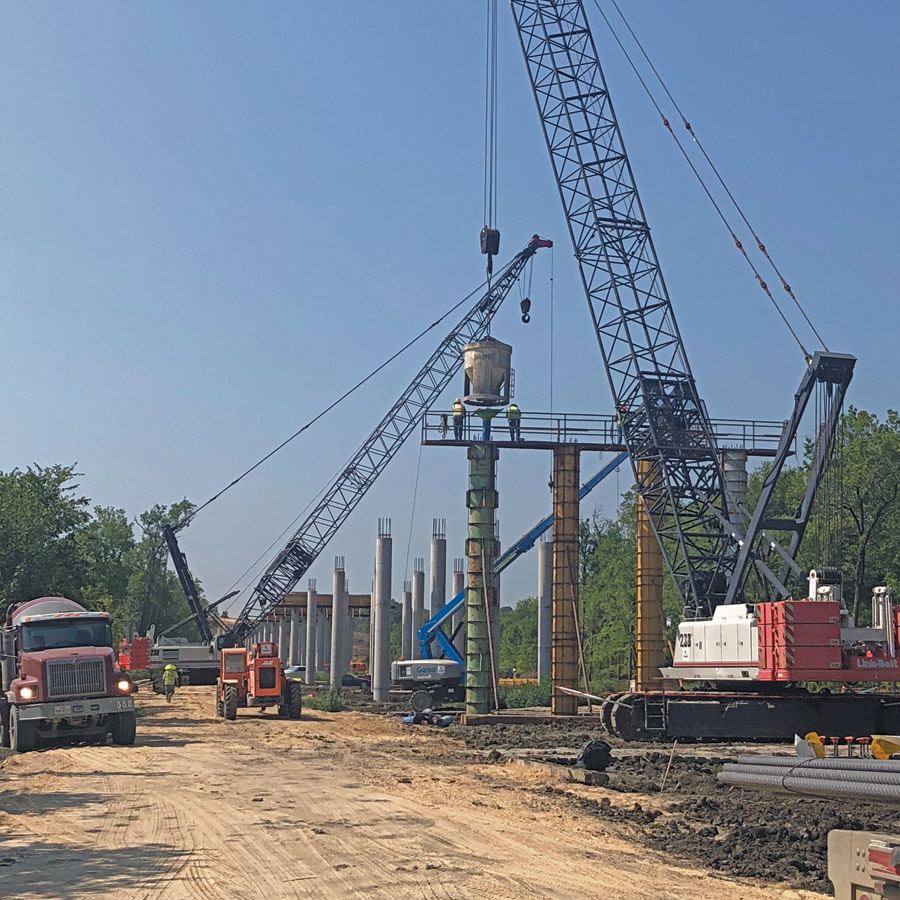 In addition to the nine bridges constructed by Austin Bridge and Road as part of the project, a total of 11 miles of roadways were also built.
Photo courtesy of the North Texas Municipal Water District

Additionally, the effort required a 20-year commitment to maintain performance requirements—not something a traditional construction contractor is typically prepared to undertake. The other option would have been to turn the mitigation over to the district, which would have to undertake both the expense of maintaining the mitigation effort and the risk.

Eventually, the team members began looking at more effective options. The decision was made to terminate Archer Western’s mitigation contract and seek out a specialized firm to handle the effort.

“Anytime you win a contract, you hate to move into another direction,” Polack says. “With the Bois d’Arc program, there was a lot of work that we were qualified to handle that was more of our expertise. This was a little bit outside of our wheelhouse and, with this owner, we wanted to help them with the solution.”

Resource Environmental Solutions (RES), an ecological restoration company based in Houston, ended up undertaking the effort with a turnkey contract tied to meeting the USACE permitting requirements.

The upshot for the district was the costs were slashed by almost half, and Archer Western avoided undertaking risks that were outside of its area of core expertise.

“For the district to do an about face and go with a full-service delivery contract was a testament to their team and their choice of a program manager,” says RES regulatory director Matt Stahman. “I’ve never seen anything done that fast, and it was very impressive.”