This website requires certain cookies to work and uses other cookies to help you have the best experience. By visiting this website, certain cookies have already been set, which you may delete and block. By closing this message or continuing to use our site, you agree to the use of cookies. Visit our updated privacy and cookie policy to learn more.
Home » Bentley Digital Twin Used for Engineering Assurance on Fusion Reactor
Building Information Modeling (BIM)Construction technology

To make informed design decisions on an experimental megaproject, Bentley Systems and London-based Brigantium Engineering helped teleport the international engineering team responsible for ITER into its infrastructure digital twin using Bentley Synchro 4D, Unreal Engine for Oculus, iTwin and NVIDIA Omniverse. Now, teams can experience their designs from within the model as they make constructability decisions.

“We’re really focused on the construction of the reactor at the moment,” says Lynton Sutton, managing director at Brigantium, a London engineering consultancy and 4D Synchro specialist.

Under construction since 2013 at the Cadarache technology research center in southern France, ITER’s facility is estimated to have a total construction cost between $21 billion and $35 billion, due to its experimental nature and sheer size. Its central solenoid is planned to be 59 ft high and weigh 1,000 tons. It is being shipped in pieces to the facility from General Atomics’ facility in San Diego. In February, the first part of the solenoid arrived at the ITER site. The experiment aims to prove the feasibility of fusion as a utility-scale, carbon-free source of energy.

The project is based around the world’s largest tokamak, a doughnut-shaped fusion reactor that uses a magnetic field to confine plasma to that shape. The reactor being built for ITER isn’t like conventional nuclear reactors wherein the nucleus of an atom is split to release tremendous amounts of energy. ITER’s nuclear fusion takes multiple hydrogen nuclei and uses intense heat to fuse them together. This process releases a great amount energy that could, someday, replace nuclear fission and other methods of conventional power generation. Nuclear fusion reactions in smaller experiments have only been sustained for very brief amounts of time, and there’s no guarantee ITER or future fusion efforts will be successful in creating sustained fusion reactions that can be used for consistent power generation.

Brigantium has been using Bentley’s Synchro 4D to simulate and forecast the construction of the reactor. Recently, they have also been collaborating with Bentley’s Innovation Lab to explore extended use of iTwin, LumenRT, NVIDIA Omniverse, Unreal Engine, Oculus Quest 2, and Azure remote rendering with HoloLens 2, to see if they can integrate model data into an immersive and lifelike virtual experience. The end goal is to have the  reactor models accessible through a range of means, including web browsers, workstations, tablets, and virtual-reality and augmented-reality headsets. “This kind of experience would allow people from all corners of the globe to experience being ‘inside’ the Tokamak Complex,” Sutton says. “This could unlock great advantages for office-based engineers and contractors, particularly when access to the worksite is restricted.”

ITER is a project that brings together countries of diverse ideologies to manufacture components and ship them to a single location. “It is like a reverse Tower of Babel,” says Laban Coblentz, head of communications for ITER.

When complete, the reactor will weigh 21,000 tons and have 62,000 miles of niobium-tin and niobium-titanium superconducting wire, which is being supplied by manufacturers from six ITER signatory countries: China, Japan, South Korea, the EU, Russia and the U.S. ITER’s central solenoid—the 1,100-ton electromagnet in the center of the machine—must be strong enough to contain a force equivalent to twice the thrust of a Space Shuttle launch. About 45,000 amps of electricity will flow through the central solenoid’s wires, generating a magnetic field that steers and shapes an energy-producing plasma torus. The cryostat base, which has already been installed, weighs 1,377 tons.

Brigantium and Bentley are now implementing and scaling up the ITER digital twin. “This technology will allow engineers and stakeholders at ITER to experience the future and be ‘inside’ the model of the reactor at real scale,” Sutton says. “It has huge potential for the project; we believe it will dramatically improve communication within the engineering and construction departments, as well as with external contractors.”

Coblentz added that the components of ITER, whether they come from San Diego or Shanghai, must fit together within tolerances of less than a millimeter due to the delicate nature of the experiment. Components are manufactured on multiple continents, shipped through marine environments with different temperatures and pressures, and virtual planning and coordination have been key for ensuring they will be assembled with the required level of precision. 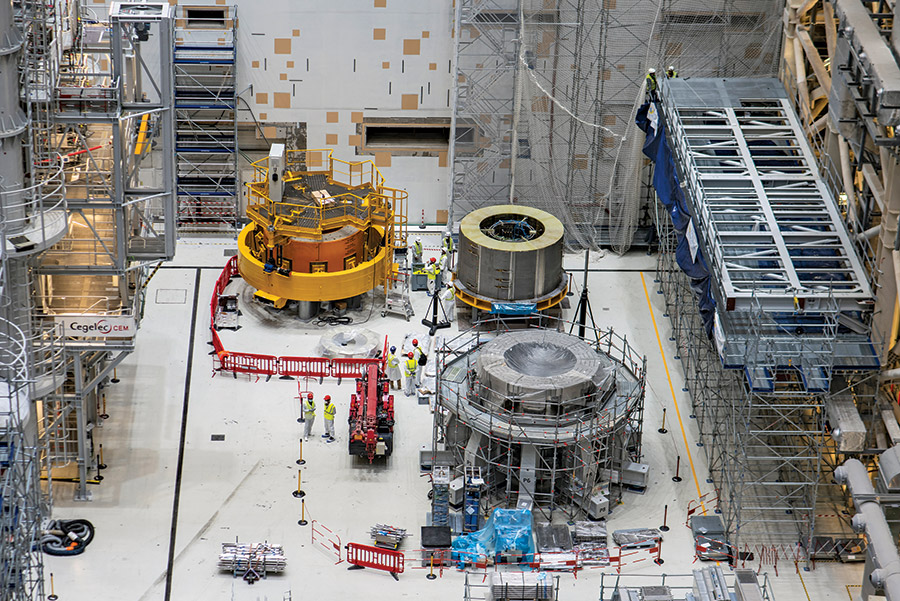 The cryostat base and ITER central solenoid first section are assembled.
Photo courtesy of ITER

Many Cultures, One Language

“That shared language is either just mathematics or CAD or shared software,” Coblentz said. The digital twin “is helpful because every one of the countries involved had their own roadmap … toward making fusion feasible.”

The section of the central solenoid that came in from General Atomics in February is 7 ft high, 14 ft in diameter and weighs 250,000 lb. That module is one of six virtually identical pieces that will be stacked on top of each other to make up the central solenoid. Large components of the ITER reactor are shipped to the nearest Mediterranean port and then trucked 65 miles to the site on modified roads and bridges that have been reinforced to handle the loads.

“The design and engineering of just the tools that are used to assemble these components are 100% bespoke,” Sutton said. The 56 pieces that make up the cryostat, including the 30-meter cryostat base disc, were made in Hazirah, India, and shipped to ITER to be welded together on site by German welders supervised by Indian engineers all working under the framework of French nuclear regulations, for an example of how many hands work on each piece of this megaproject.


The Long Road to ITER

The idea of building and testing a circular tokamak as a configuration for a nuclear fusion reactor first gained traction back in the 1960s. The genesis of the ITER project dates back to the Geneva Superpower Summit in 1985, where the idea of a collaborative international effort to develop nuclear fusion energy for peaceful purposes was raised by General Sec. Mikhail Gorbachev of the Soviet Union, who proposed the concept to President Ronald Reagan.

The design for ITER was approved by its members in 2001. China and South Korea joined the project in 2003, followed by India in 2005. Construction began in 2013 after the 445-acre site in southern France was selected.

“In something of this complexity it would have been traditional to give the entire design to one company—a Siemens, a Wood or a Jacobs,” Coblentz says. “Even so, the procurement would’ve been complex,” he adds. “But the ITER project itself was based on bringing together countries of unlike ideologies to actually make components and ship them to a single location.”

Brigantium’s 4D model of the reactor has to be easily accessible and intuitive to use, not only because it will inform engineers and stakeholders scattered among different countries, but also because personnel on and off the site need a straightforward way to communicate and identify issues.

“You have the high quality polished, NVIDIA Omniverse renderings and  animations,” says Greg Demchak, director of Bentley’s Digital Innovation Lab. “That gets closer to photorealistic rendering versus the typical CAD output that just comes out of CATIA.”

Demchak said that newly developed prototypes for large-model streaming were built on top of Unreal Engine, and stream model geometry over Wi-Fi to the Oculus headset for stakeholders to view. They found that VR was a natural way to convey the state of the project to stakeholders and construction teams.

“There’s a range of where photorealism is necessary on that dimension for the construction delivery team versus the general public or stakeholders,” he says. The constructability problems Brigantium is trying to solve with the ITER construction team currently involve the assembly sequence inside the reactor. “The new [benefit for the team] is to use 3D immersive visualization for the vessel assembly, where the problem is not something that can be conveyed with 2D plans,” Demchak says.

Sutton says multiple levels of staging inside the reactor allow operations to happen in parallel. Complex scheduling allows simultaneous installation of components on the surface and the walls of the reactor. “It’s a multiplane problem. You can’t write that up on a whiteboard,” he says. Completion is slated for 2025.

SoFi Stadium Builds Out Digital Twin for Operations and Maintenance