Getting the digital twin workflow into the typical design, construction, operations cycle has been a thorny problem for digital twin advocates. What’s the impetus for putting in the extra effort to create and update a digital twin when existing workflows already get the projects designed and built?

Bentley Systems has done a bit of an end run around that problem, bringing iTwin digital twin workflows deeper into its own software, without creating any significant additional workload for its users.

The switch to a more data-centric mindset, where specific files and applications are less important than the project data within them, is a bit overdue, says Greg Bentley, CEO of Bentley Systems.

“Digital deliverables consist of files at this point in time. They’re useful and here to stay, but they consist of the digital components which we want to bring together in a data-centric way to use for other things,” said Bentley, speaking at the company’s Year in Infrastructure conference, held in London Nov. 14 to 15.

Bentley Systems launched its iTwin.js platform in 2018, offering an open-source format to build digital twins that could work with many types of data streams. The new iTwin update comes in the form of three new capabilities.

With iTwin Capture, users can take drone imagery or point cloud scans of infrastructure assets and start building digital twins directly off of these reality captures. In iTwin IOT, data from sensors and other Internet of Things devices mounted on infrastructure assets or at jobsites can flow directly into the iTwin platform, granting the digital twin a more active role in safety and environmental monitoring.

For iTwin Experience, Bentley Systems seeks to simplify for owners and operators the many data sources flowing through a complex digital twin into a “single pane of glass.” This classifies data streams as engineering, operations or information technology layers, explains Nicholas Cumins, chief operating officer of Bentley Systems. “It’s used to visualize, to query, to analyze critical infrastructure data at any level of detail or scale, and it’s all geospatially referenced,” he adds, noting that this additional context will allow owners and operators to make actionable decisions based on what they are seeing in the iTwin Experience. 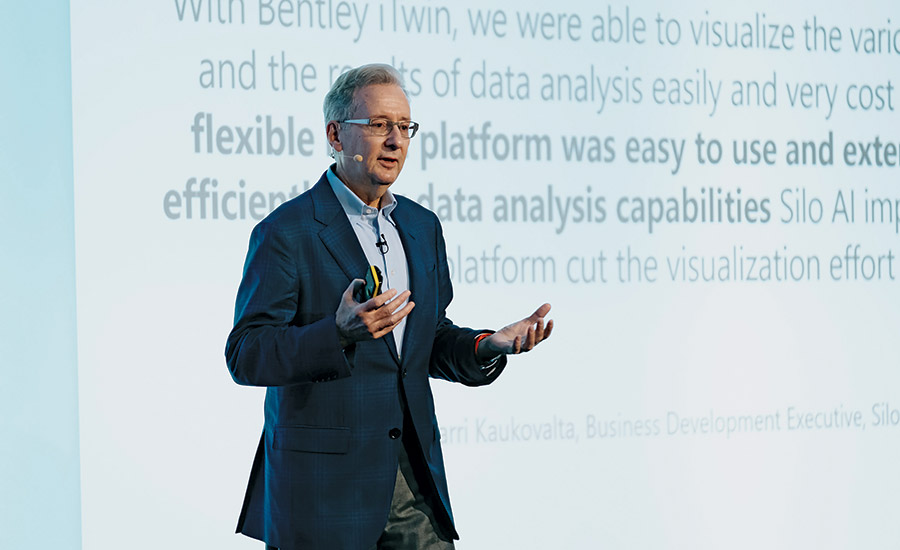 Bentley Systems also unveiled its new Infrastructure Cloud, powered by iTwin. This cloud environment integrates into the company’s ProjectWise project delivery software, as well as its construction scheduling platform SYNCHRO and its asset management package AssetWise. The Infrastructure Cloud will also carry benefits beyond a single project, acting as a source of infrastructure schema and data that can be used on future projects.

The promise of reuse and learning from past projects is one benefit of digital twins that is still to come, explains Greg Bentley. “We want reuse to be the norm,” he says. “It’s amazing how many projects still start with a blank screen.”

Shifting to a data-centric approach—where project information can flow into libraries for future use rather than sit in the deliverable file formats that may go obsolete—is key to getting more out of digital twins, he says.

“With our Bentley Infrastructure Cloud, the component that was chosen in design [in ProjectWise] will build up a record of experience in operations [through AssetWise] and help better inform design,” Bentley points out, and that’s not to forget the middle step—of construction—either.

He says that this new intelligence on the performance of components and reused designs will accelerate the adoption of industrial processes in construction.