This website requires certain cookies to work and uses other cookies to help you have the best experience. By visiting this website, certain cookies have already been set, which you may delete and block. By closing this message or continuing to use our site, you agree to the use of cookies. Visit our updated privacy and cookie policy to learn more.
Home » Chris Andrews: Veteran Software Engineer Helps Create the Connections between BIM and GIS
AwardsTop 25 Newsmakers2021
ENR 2021 Top 25 Newsmakers

Chris Andrews has been working with computer-aided drafting and geographic information systems data nearly as long as they’ve been used in construction, “including mapping indoor facilities on the web, starting from work in startups in the late 90’s,” he says.

“My early career included work in enterprise integration for telecommunications, real property, and utility customers who were continuously concerned about the integration of CAD, GIS, and other types of engineering data to solve problems in planning, construction, and operations.”

In September, under the stewardship of Andrews, GIS data from ESRI’s ArcGIS online platform and Autodesk’s Construction Cloud were, for the first time, integrated in one product, ArcGIS GeoBIM. Building Information Modeling is the parametric, 3D successor of 2D CAD. Andrews was positioned well to make the two coexist because in 2007 he led the product definition and management of Autodesk Infrastructure Modeler, which eventually became Autodesk InfraWorks.

InfraWorks brought together geospatial and engineering data and inherently stored data on the cloud to enable collaboration.

When Andrews joined Esri in 2014, he wanted to bring together Esri’s web experiences, open standard GIS technology, and Autodesk’s capability in BIM to integrate engineering and construction in a workflow that allows data to move more fluidly from planning to construction and beyond.

Talks with Autodesk colleague Theo Agelopoulos, senior director of architecture/engineering design strategy, began almost immediately and both men were soon ready to pitch a partnership to their CEOs.  It was announced in 2017. Andrews wrote the specification for reading Revit in ArcGIS, an important innovation for the model views in the eventual product. 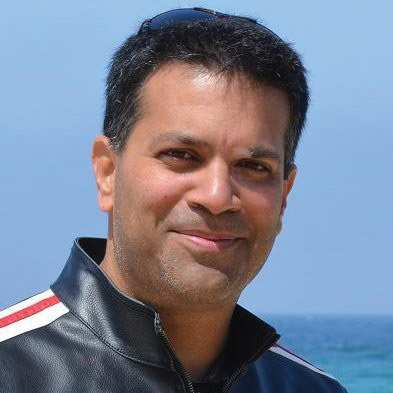 “The first thing we did was build a more direct connection from Autodesk products such as Civil 3d and Map 3d into ArcGIS, as well as a better workflow,” Agelopoulos says. Those data connectors were eventually designed into ArcGIS GeoBIM. Andrews recommended Esri acquire BrockwellIT, whose employees became the nucleus of the team that created ArcGIS GeoBIM.

Just after the launch, Andrews was rewarded with another big data challenge when he became the COO and head of product at Rendered.ai, a firm that creates synthetic data for several industries. Rendered.ai is planning to release examples of BIM and GIS data together to create synthetic data for training AI around facility and asset inspection and monitoring this year.

“I’m very happy that I’ve been able to help ideate, drive, and promote new technologies and products that have enabled engineers, planners, and owner/operators to collaborate together on data that impacts all of our daily lives through the buildings we inhabit, the infrastructure we rely on, and the environment that surrounds it all,” Andrews says.

Jack Dangermond: Mapped a Path to GIS in Design and Construction