This website requires certain cookies to work and uses other cookies to help you have the best experience. By visiting this website, certain cookies have already been set, which you may delete and block. By closing this message or continuing to use our site, you agree to the use of cookies. Visit our updated privacy and cookie policy to learn more.
Home » China Tops Out Dome on Reactor in Nuclear Power Expansion Push
Power & Industrial
2021 Global Sourcebook

Marking a construction milestone for the Zhangzhou nuclear power plant in China’s Fujian province, the inner dome of the facility’s first reactor unit was recently lifted into place and installed. The dome, key to containing radioactive substances, topped the first of two reactor units under construction at the plant, which is owned by China National Nuclear Corp. Unit 1 will now transition to the installation phase. Both units are Hualong One reactor models, China’s third-generation pressurized-water reactor technology. Each unit can generate approximately 10 billion KWh of electricity annually to meet the demands of 1 million people in moderately developed countries. Zhangzhou Unit 1 is among 18 reactors being built in China, which has more nuclear reactors under construction than any other country, according to the World Nuclear Association. Units 1 and 2 are set to begin operation in 2024 and 2025, respectively. 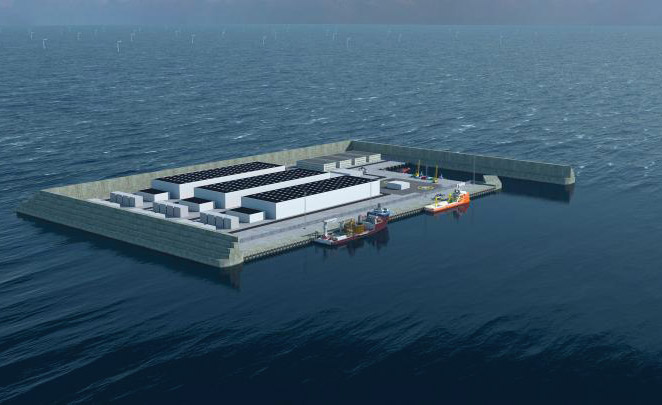 In a major step toward developing a North Sea offshore wind based energy island, project developer Copenhagen Infrastructure Partners reached a partnership deal in November with four major international firms in marine and offshore construction. Operating as the NJORD Group, members are Spain-based contractor ACCIONA, Danish dredging firm Boskalis, offshore services provider DEME Group of Belgium and contractor MT Højgaard International, also of Denmark. About 50 miles off the Danish coast, the VindØ energy island would connect up to 10 GW of offshore wind to Denmark and nearby markets. Operation could begin by 2030.

In a bid to move heavy transportation away from fossil fuels, energy giant BP will build a large-scale green hydrogen plant in England that could deliver 500 MWe by 2030. The firm expects the multiphase project, HyGreen Teesside, to propel the Teesside industrial region into the first U.K. hydrogen transport hub. The facility, along with H2Teesside, a blue hydrogen plant BP proposed in March, could deliver 30% of Britain's 2030 hydrogen production target. HyGreen Teesside could operate by 2025, initially producing 60 MWe.

Plans are moving ahead for the $1.7-billion, 800-MW Golden Plains Wind Farm in southeast Australia after the state of Victoria approved a plan that would include fewer project turbines. Developer WestWind Energy submitted a design revision in early 2021 to address environmental concerns. Its revised plan calls for installing 215 turbines, down from 228 approved in 2018. One of Australia's largest wind farms, Golden Plains would produce 3,500 GWh of energy annually. Construction could begin in mid-2022.