Construction is underway on a $240-million Missouri River crossing for I-70 near Rocheport, Mo. The paired 3,000-ft-long, three-lane structures will replace a 60-year-old, structurally deficient continuous truss bridge that the Missouri Dept. of Transportation calls the “lynchpin of America” because the highway connects the state’s largest cities, St. Louis and Kansas City, and key portions of the U.S. system. The structure currently carries more than 12.5 million vehicles per year, including 3.6 million trucks. To minimize traffic impacts, plans call for the existing bridge to remain in service until the first river span is completed, a milestone the agency expects to achieve by late 2023. The second bridge is scheduled to be ready the following year. Lunda Construction Co. is leading the design-build project, which is being funded in part by an $81.2-million Infrastructure for Rebuilding America (INFRA) grant from the U.S. Dept. of Transportation. Parsons Transportation Group Inc., Dan Brown & Associates Inc. and Hugh Zeng United are providing design services. Safety enhancements planned for the new structures include high-friction surface treatment, pavement sensors, wet reflective striping and a linear delineation system. The project team will also reconstruct the nearby County Route BB interchange. 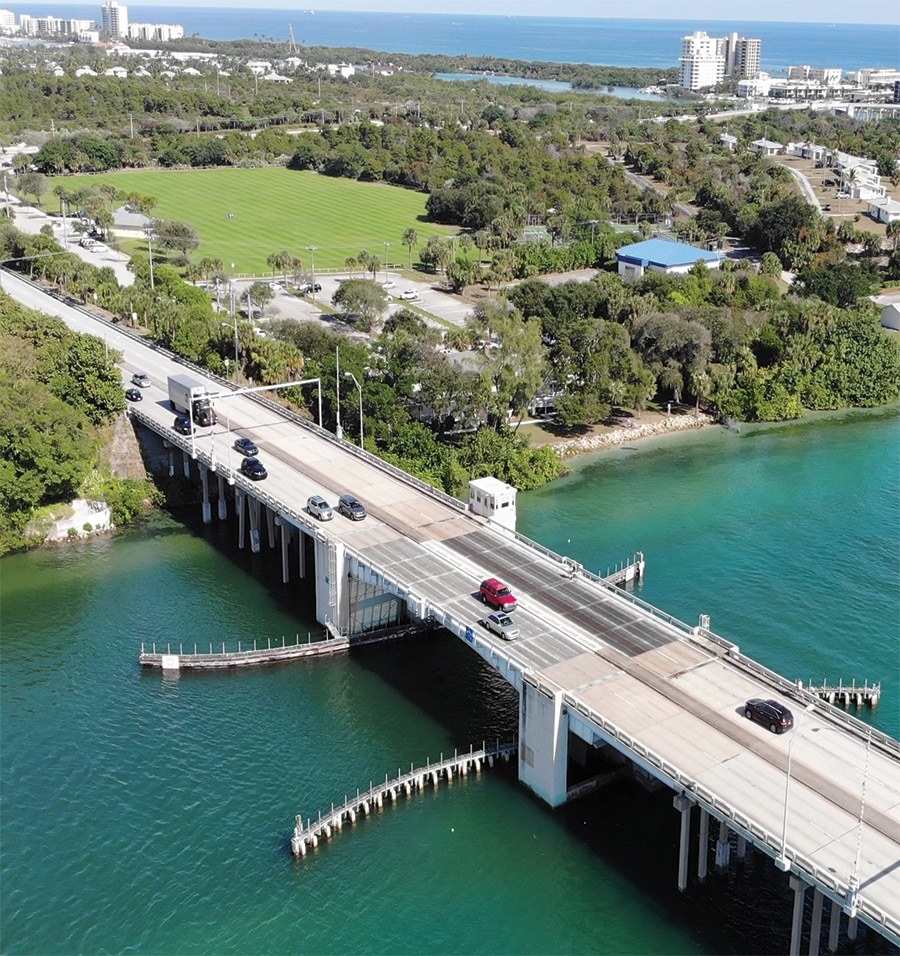 A Lift for Jupiter

The Florida Dept. of Transportation has begun a five-year, $122-million project to replace the U.S. Route 1 bridge across the Loxahatchee River in Jupiter. To be built by Johnson Brothers Construction Inc., the twin double-leaf drawbridge will provide up to 42 ft of vertical clearance—nearly double that of the structurally deficient 1958 bridge it replaces—and a 125-ft-wide navigation channel. Other features include a concrete bridge deck to reduce traffic noise, a new tender house, pedestrian overlooks and a stormwater management system to safeguard the river’s marine life.

The South Carolina Dept. of Transportation has awarded the first two construction contracts in a five-phase, $1.7-billion program to modernize the outdated I-26/I-20 /I-126 interchange complex in Columbia. Totaling $337 million and set to begin major construction next year, the first two phases begin a seven-year effort to widen 14 miles of interstate, upgrade seven interchanges with modern ramp configurations and other measures to improve safety and traffic flow.

Officially underway in August, the four-year, $216.8-million Illinois Dept. of Transportation project will bring the nearly 60-year-old conventional cloverleaf interchange in Champaign up to date to better support modern traffic volumes. Designed to eliminate existing hazards with merging, weaving and slow speeds, the project includes 11 new structures, including two flyover ramps. A third auxiliary lane in both directions will be added to a portion of I-74.

The Maine Dept. of Transportation is more than halfway through its nearly three-year, $44.8-million program to replace eight 60-year-old bridges along a four-mile stretch of I-19 in Hampden. With northbound structures substantially complete in September, construction is underway at all four southbound bridges, all of which feature non-corrosive materials to reduce future maintenance requirements. The Souadabscook Stream crossing is using single-span structures to eliminate locating piers in the waterway.

Construction is underway on an $85.7-million upgrade to a 3-mile section of I-37 outside Corpus Christi. The 66-month project includes building wider, higher bridges across the Nueces River to make the crossing more resilient to storm surge and flooding. Along with widening the highway to eight lanes, the Texas Dept. of Transportation will upgrade the nearby U.S. Route 77 interchange by rebuilding several structures.