As part of an overall strategy to relieve congestion and expand mobility options in Santa Barbara County, Calif., Granite Construction is serving as construction manager for Caltrans’ upgrade of a 10.8-mile segment of U.S. Route 101 between the cities of Santa Barbara and Carpinteria. The $410-million project, which began construction in 2020, will add a peak-period carpool lane to the freeway in each direction, reconstruct creek crossings to improve water flow, upgrade freeway access ramps and improve adjacent streets and intersections. In addition, Granite also has been awarded multiple general contractor assignments for work along the corridor, including roadway demolition, new retaining walls and refinements to the highway’s curve geometry. The entire program is scheduled to be complete by 2028. 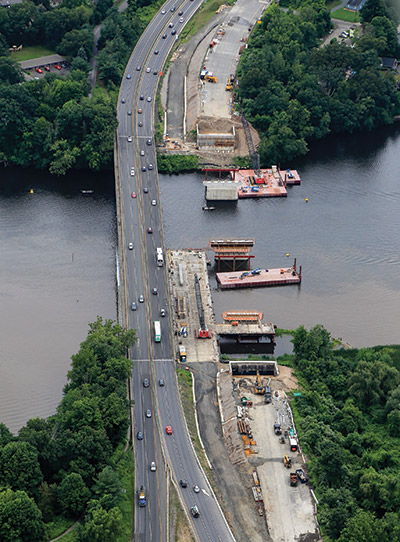 A 300-ton crane will soon begin placing steel for the $52.8-million Rochambeau Bridge rehabilitation project in Connecticut. Begun in June 2020, the 42-month upgrade of I-84’s twin-span Housatonic River crossing is being carried out from work trestles and barges while also maintaining a 75-ft- wide navigation channel for boaters. The bridge has extra-wide shoulders, allowing for bi-directional traffic on one span as work is completed on the other one. As of Aug. 30, 36 of the 42  girders had been set, with the remaining six to be set in September directly over the marine channel.

Construction is scheduled to begin this fall on phase 2 of the I-35 expansion, a four-year, $640-million design-build project in Dallas County, Texas. Located within a 6.3-mile corridor between I-635 and the Denton County line, the project calls for reconstruction of the existing six general purpose lanes, two reversible, tolled-managed lanes and frontage roads. In addition, the project team will add two general-purpose lanes with new auxiliary lanes at the entrance and exit ramps.

Beset by structural and functional limitations, the 71-year-old, 661-ft-long movable double-leaf bascule bridge in Monmouth Co., N.J., is on track for replacement with a  $107.5-million drawbridge now under construction. Along with providing a more reliable structure to serve one of the area’s key coastal evacuation routes, the new bridge will have two eastbound lanes, one westbound lane, shoulders and sidewalks. Construction is scheduled to complete in spring 2025.

As part of a multi-phase program to upgrade the junction of two key Seattle traffic corridors, the $68-million project will extend SR 520’s new transit/HOV system to create a dedicated, reversible transit connection with the I-5 express lanes, along with a reversible transit/carpool ramp at the I-5/Mercer Street interchange. Construction began this summer and is expected to be complete in late 2023.