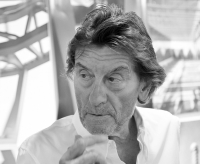 Helmut Jahn, 81, managing principal of JAHN Architects based in Chicago and Berlin, died May 8 after a bicycle accident near his home in St. Charles, Ill.

“Jahn was one of the most inventive Chicago architects,” Chicago Mayor Lori E. Lightfoot said in a May 9 tweet.  [His] impact on the city—from the skyline to the O’Hare tunnel—will never be forgotten. His architectural footprint will be felt and seen across the globe for generations to come.”

Born near Nuremberg, Germany, in 1940, Jahn arrived in Chicago in 1966 to study architecture at the Illinois Institute of Technology. Upon arriving, he was almost immediately hired by Gene Summers, one of his IIT professors who was lead designer at Charles Francis Murphy's firm, CF Murphy Associates. Jahn assisted Summers in the design of the McCormick Place Convention Center, which was completed in 1971.

"I worked with Helmut from the very first days of my professional life and on for over 18 years," says Jim Goettsch, chairman and co-CEO of Goettsch Partners, who worked with Jahn at CF Murphy. "Helmut was instrumental in helping me to develop a point-of-view and a methodology which is still the foundation of my approach to architecture."

Jahn continued to win big commissions in Chicago for CF Murphy throughout the 1970s, and by 1981, with Summers retired, became the lead designer of the firm, which was renamed Murphy/Jahn.

In this period, Jahn also became the eighth member the Chicago Seven group of architects who rebelled against what they saw as a reductionist modernist narrative in the media, according to the Chicago Architecture Center. The group, which also included Stanley Tigerman and Ben Weese, said they weren't rebelling against modernist master Ludwig Mies Van der Rohe, but rather his imitators.

While it was widely acknowledged that Jahn's earlier work at CF Murphy did share design characteristics with his fellow German, known as Mies, his design for his first Chicago high-rise, the 495-ft-tall Xerox Center (now 55 W. Monroe St.) had curvy, rounded corners and large, white, aluminum-and-glass panels that took advantage of the latest, at the time, curtain wall technology. His use of curved curtain wall would become a trademark of his designs. It was either loved or strongly disliked on his two most well-known buildings, the James R. Thompson Center, a state office building in downtown Chicago, and the United Airlines Terminal at O'Hare International Airport.

"The rigor of his thinking, confidence and drive were a tremendous relief from the postmodern fog that had taken hold of architecture," says Rebel Roberts, Stantec's practice leader for design in Chicago. Roberts first worked with Jahn on the Thompson Center in the early 1980s. "If you’ve ever been in Terminal One when the sun is rising, you know what I mean."

Jahn was also on the cover of GQ magazine and became known as much for his playboy lifestyle—he owned a racing yacht he named "Flash Gordon 2" that won the Chicago to Mackinac Island Race in 1995—as his architecture in the '80s and '90s. Throughout he continued to emphasize that architects should not compromise on their designs and was an unabashed supporter of using high design to denote success or status.

"I don’t think there’s anything wrong in using a building to connote achievement and a certain commercial power,” he once said in an interview. “I think that’s the way architecture has been used historically. Great statesmen, great emperors, great dictators always build great buildings.”

But his outsized persona also gained detractors, particularly when the Thompson Center, known at its completion in 1985 as the State of Illinois Center, did not perform well due to solar heat gain in its 17-story atrium, a feature Jahn said was there to denote open, honest government. The replacement of gray, dark blue and silver panels Jahn had specified with less-expensive salmon and robin-egg blue panels also made many Chicagoans say the building's color scheme was an eyesore. State workers brought umbrellas to work to shield their eyes and computer terminals from the morning sun.

"I think he gets too much criticism for things not in his control," says Lucien LaGrange, principal of Studio Lucien LaGrange. "He wasn't to blame for the HVAC system, you cannot blame the architect. You have to look to the engineer and the maintenance of the building, and it wasn't there. As an architect, he was the type who could create the entire vision for a building from a pencil and a piece of paper. It's a skill you do not often see today."

Ill. Gov. J.B. Pritzker announced May 3 that the state would put the Thompson Center up for sale, and Landmarks Illinois placed it on its list of endangered architecturally significant buildings for the fourth year in a row—the first three due to years of deferred maintenance by the state.

Jahn developed a reputation for being uncompromising with his designs and for demanding more than the norm from engineers, contractors and even some clients.

"Helmut was an incredibly skilled, visionary architect," says structural engineer Ron Klemencic, chairman and CEO of Magnusson Klemencic Associates, who worked on several projects with Jahn, including Leatop Plaza in Guangzhou, China. "He was a member of a vanishing breed of master architects truly committed to realizing amazing buildings."

Klemencic calls Jahn "unafraid, unabashed, demanding and at times quite critical—as his expectations were always exceptionally high for the project at hand and the team surrounding him."

As Jahn became more of an elder statesman, his firm took on smaller projects, such as a dorm for IIT and a single-room occupancy public-housing project for Mercy Housing Lakefront. At 80, he still went to work and he actively managed the business during the pandemic.

He could still grab headlines, especially when he aimed his criticism at the city's politicians. In 2019, after the winning team was announced by then-Chicago Mayor Rahm Emanuel for the new O'Hare International Airport design, Jahn accused Emanuel of rigging the competition and said Chicago deserved better, via a Post-it Note that he signed and shared on Twitter.

"I am embarrassed that some of my most respected colleagues have been misused to placate [a] premeditated decision not justified by design or experience," read Jahn's letter. "Such attitude has not made Chicago a capital of world architecture. Hopefully, the next mayor will turn this around."

Mayor Lightfoot has shown no sign of listening to Jahn's criticism, and the project has moved forward with the winning Studio ORD team.

The design for what may be Jahn's last skyscraper, 1000M, planned for 1000 S. Michigan Avenue, was the most high-profile Chicago project shut down due to the pandemic. Developer Time Equities promised that the project will continue.

"He will be greatly missed, but we look forward to carrying his legacy forward with the completion of 1000M," says Francis Greenburger, chairman and CEO of Time Equities. "As part of his legacy, he has left behind a very talented team of associates, including Philip Castillo, who we look forward to continuing our close association of many years."

Contractor James McHugh Construction Co. said it is currently in negotiations with Time Equities and JAHN to resume the project.

"Helmut made everyone around him better by challenging us to stretch beyond the common answer," says Klemencic, and "instead, to have original and daring thoughts about what might be possible."