A steel and glass building that resembles the shape of World War II amphibious landing craft ready to take a beach juts over the grassy landscape in rural Somers, Wis.

The Pritzker Archives & Memorial Park Center, near Kenosha, is a planned expansion of the Pritzker Military Museum and Library in Chicago. The first project in the 288-acre park is the Military Archives Center that rises out of the Wisconsin prairie.

The private military museum’s mission is to increase the public’s understanding of military history, military affairs and national security by providing a forum for the study and exploration of the country’s military: past, present and future. 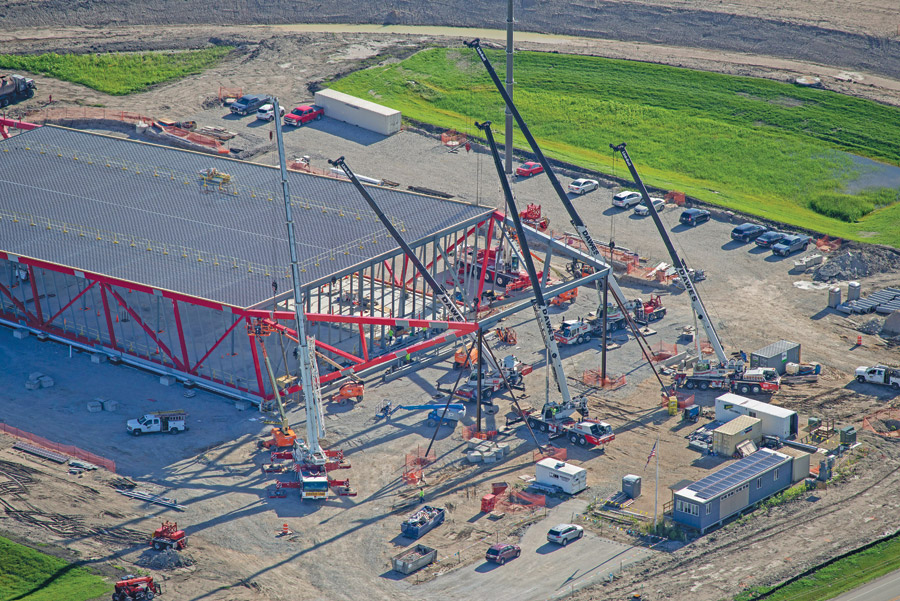 Founded in 2003 by Jennifer Pritzker—a retired U.S. Army lieutenant colonel and the cousin of Illinois Gov. J.B. Pritzker—the Chicago Military Museum and Library began with Pritzker’s personal and family holdings, a collection that has grown to about 100,000 books, artifacts and other items. The two-story, 48,000-sq-ft Military Archives Center—the first piece of the Somers development—will house some of those materials and support another 20 to 25 years of growth for the organization and its collection. A 455-KW solar array and 7,663 red twig dogwood shrubs for the park are some of the future projects planned for the first phase on 17 acres of the site. A future phase will include a Cold War Memorial. The first phase is expected to be completed in November after construction began on the center in October 2020 after a pandemic-related delay. 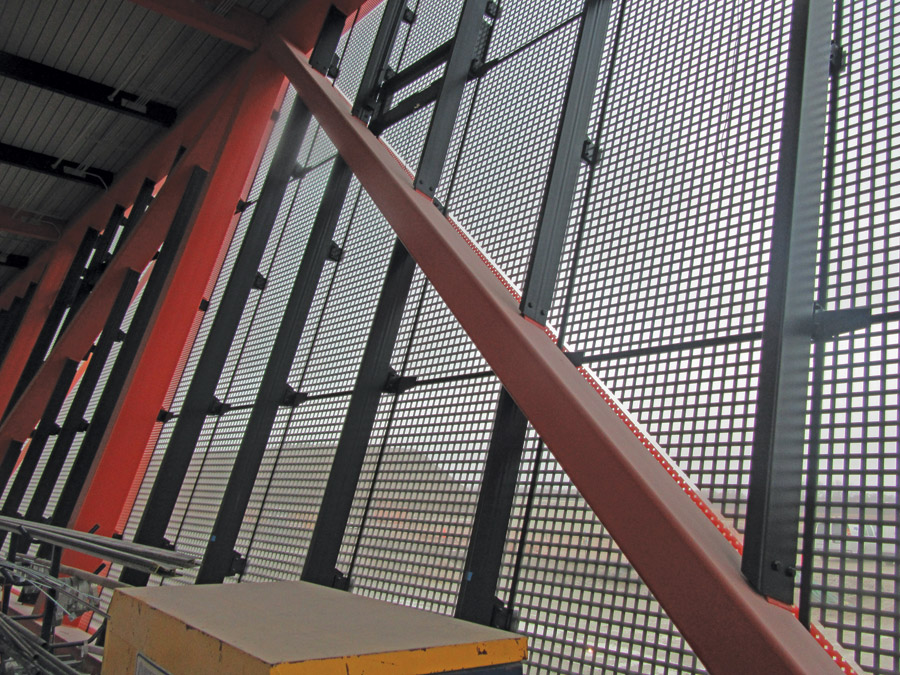 A frit pattern ensures that light coming into the gallery space will not fade or harm any exhibits.
Photo by Jeff Yoders for ENR

The center could have been a nondescript warehouse containing a scholarly collection of papers, uniforms and other records from World War I to today, but Pritzker sought a design that would tell the story of soldiers, sailors, airmen and marines in a bold way.

“We talked to Jennifer Pritzker about how the building needed to be integrated with the landscape,” says Philip Castillo, executive vice president and managing director of architect Jahn. “When Helmut and I first talked about this building, he said it needed be kind of rough and tough, connections didn’t need to be ground down. We needed to see them so [that] it was like a piece of military equipment.”

The archives center was architect Helmut Jahn’s last civil project. He died in 2021 after completion of the design. Jahn and Castillo worked together to make a plan for a 26,000-sq-ft gallery and workspace above a 17,500-sq-ft climate-controlled archival space. The gallery’s shape is formed by two 320-ft-long steel trusses on its sides with the gallery between them. The form is visible from nearby Interstate 94.

“It has a kind of tapered front and that resonated with everybody.”
—Philip Castillo, Executive Vice President and Managing Director, Jahn

“It has a kind of tapered front and that resonated with everybody,” Castillo says.

For the JV contractor Pepper Construction/Riley Construction, that design meant steel erection on an undeveloped prairie with underground construction happening simultaneously. Some of the concrete walls of the underground archives are up to 20 in. thick, Castillo says. Castillo had previously worked on one of the largest underground archival storage spaces in the country at the University of Chicago, whose library features a five-story-deep waterproof basement.
Greg Leofanti, vice president of Pepper in Chicago, says, “We were lucky enough to get released for this project early so we could coordinate with [Castillo’s] team [and] the structural engineer WSP to really kind of dial it in and coordinate with all the glass connections.”

LeJeune Steel in Minneapolis fabricated the steel shapes that created the wall trusses, made up of common plate and tube steel members. Trinity Products in O’Fallon, Mo., both furnished those members to LeJeune for fabrication and supplied the plate steel that was used on site, Leofanti says. Russel Metals and Atlas Tubes supplied all the tube shapes that were used as window mullions, and the wide-flange shapes at the roof were supplied by Steel Dynamics in Fort Wayne, Ind. The steel used on the project totaled nearly 600 pieces and weighed 416 tons. 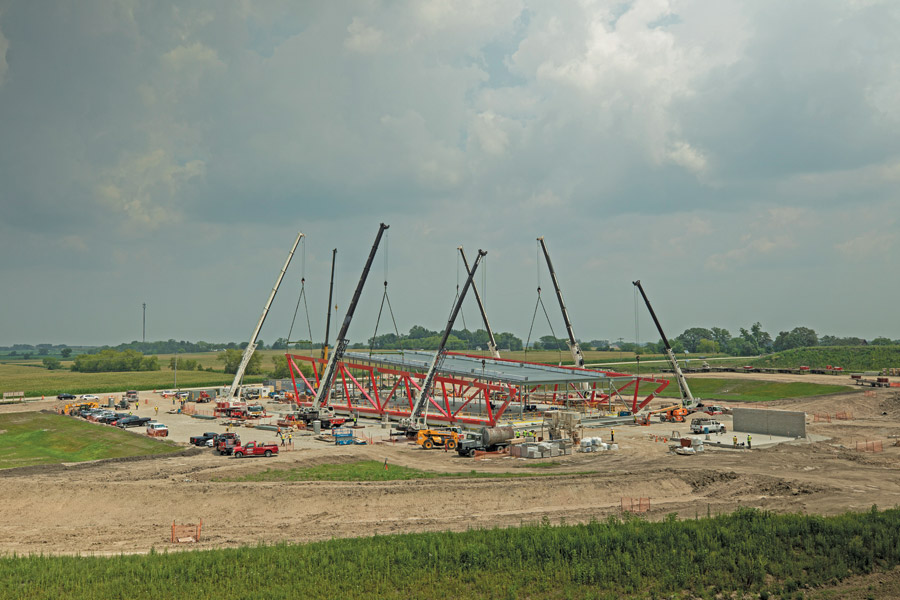 To attach the trusses to the gallery’s main structure, a total of seven cranes—three on each side and one assist crane promenading between both sides—delicately danced together in a one-day lift.
Photo courtesy Pepper Construction

Pepper’s team had to perform some of the truss detailing on site. The glass on the facade is clipped to the steel by more than 100 mullions. The glass pieces range from 6 ft to 12 ft long and all of the vertical mullions had to be placed in the field, says Brian Peter, project executive at Pepper.

Each steel truss had to be picked up with three cranes and one shared assist crane and attached to the main steel skeleton structure by bolted connections before they could be released. Both trusses had to be erected in one day, so a total of seven cranes were working on the picks to attach the trusses to the frame. Crews from Area Erectors in Rockford, Ill., erected the trusses. A crane package was later used to lift and set the two 85-ft cantilevered trusses. Dawes Rigging and Crane Rental provided two Link-Belt HTC-8675s, two Liebherr LTM 1130-5.1s, one Liebherr LTM 1230-5.1 and one Link-Belt ATC 3210 for the project. 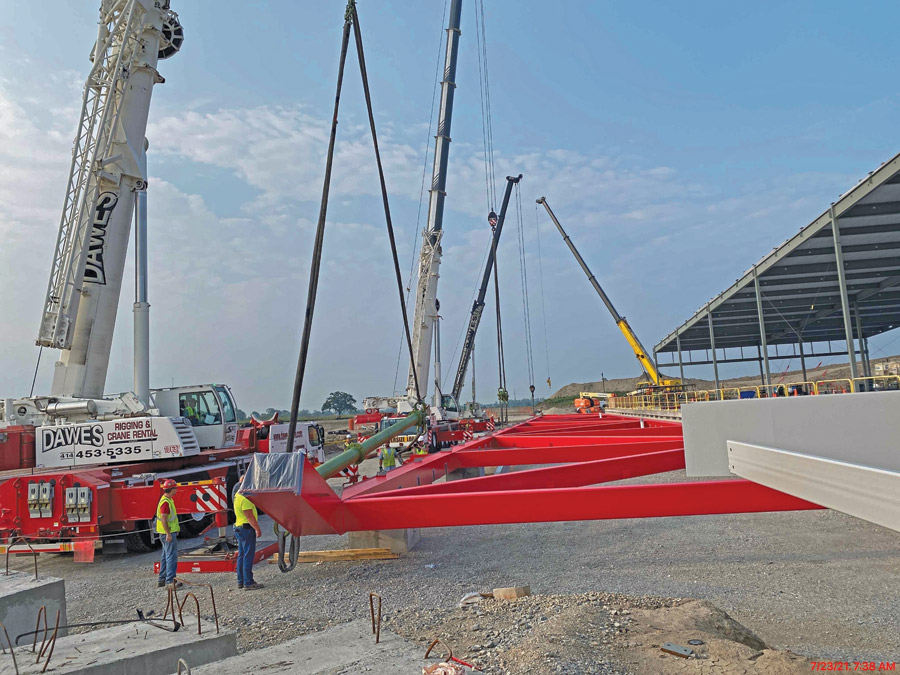 After detailing the trusses in the field, lift cranes prepare to attach them to the building’s steel skeleton.
Photo courtesy Pepper Construction

“We lifted one side, held it in place, went on the other side and lifted that and then bolted it all together,” says Fred Galati, group superintendent for Pepper.
Castillo notes the trusses are bearing walls. Working with WSP and Pepper/Riley in almost weekly meetings, the erector worked out all the kinks of the big placement day before it happened.

For the canopy steel, temporary vertical posts were installed to hold them up until the whole truss or canopy members were erected, locked in and bolted and then were cut out.

When the canopy portion was installed, Galati says he asked WSP engineers “how much do you think we can expect for this thing to drop” when the temporary posts were cut out. The answer was 0.75 in. And when the posts were removed, the drop was, indeed, 0.75 in.