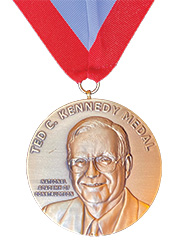 Instead of coming up on stage at the National Academy of Construction’s annual meeting in Boston this year, I joined 36 industry leaders on the group’s virtual stage on Oct. 29. The industry leaders for the Class of 2020 were selected to build the academy’s body of expertise, and I was there to receive the Ted C. Kennedy Award.

The inductees are people with amazing accomplishments in engineering, construction management, education, craft leadership and more. The academy, now with 358 members, honors leaders acknowledged as experts who also are ready to serve the nation.

The current class includes Tom Sawyer, honored for insightful  industry journalism. Tom was  ENR’s veteran technology editor, now retired but consulting for us. He is the fourth ENR editor to become a member. Editor Emeritus Art Fox, who died in 2016, was inducted in  2001. I followed in 2010, and Editor Emeritus Howard Stussman was inducted in 2014.

The academy staff shipped the Ted C. Kennedy Medal to me so I could have it at the ceremony. When I opened the box and looked at Ted’s face, I was flooded with memories. I first knew Ted from the pages of ENR as a pioneer of the open-shop movement, and one of the founders of BE&K, a contractor that focused on people. BE&K’s industrial construction projects had noticeably more women and people of color pulling the wire and welding the pipe—its doors seemed more open than those at many other firms in the 80s.

Ted, who died in 2012, was a regular at ENR’s Award of Excellence event, and a two-time ENR newsmaker—in 1981 for his contributions to craft training and in 1989 for his efforts to “preserve the contractor’s right to manage its projects in the face of an almost unprecedented campaign by labor unions against his company and clients.” Later, I saw him in action through various organizations such as CURT and NAC, where he worked with organized labor and owners to boost construction safety, productivity and ethics.

Winners are chosen to reflect Ted’s commitment to people, ethics, innovation, education, safety, and generosity. For me, all that represents Engineering New-Record, where we work hard at truly professional journalism. We have an amazing team of talented writers, editors and data analysts—I would have had no distinguished career without them. We deliver intelligence that helps construction’s fragmented sectors understand they are part of a larger industry. Ted came to believe that associations, professions, trades and companies that only guard their own turf hold back progress, and that we have it within our power to make things different and better. Thanks, Ted, for setting the stage.

What the ENR Newsmakers Tell Us About News in 2021

Fluor Finishes 2020 With More Losses But Smaller Ones, as Its Stock Price Improves