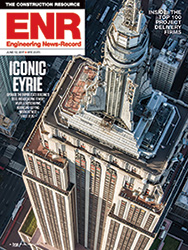 We were so honored last year when CMA announced that the editorial excellence award would be dedicated to the memory of Tudor Van Hampton, ENR’s former managing editor, who died in 2017 at age 39. We are thrilled that the first recipient is an ENR editor! CMA gave all entry fees for this category plus several special donations—a total of $1,000—to Habitat for Humanity Indianapolis, one of Van Hampton’s favorite nonprofits.

Blair says he considers Van Hampton his mentor at ENR. “He generously shared his skills and knowledge, such as how to write more focused articles and produce compelling videos.” He adds that he is touched and humbled to receive the award, “but it’s bitter­sweet. I miss his guidance and jovial personality every day.”

In the entry, Blair showed his all-around journalistic excellence in informing the industry about compelling projects, natural disasters and ways to bolster productivity, safety and positive community impact. In 2017, he trekked north of the Arctic Circle in Alaska to report on helicopter lifts of communications towers to bring internet to remote villages. He visited Copenhagen contractors tunneling through contaminated soil and filmed U.S. contractors’ extraordinary efforts to fix the Oroville Dam spillway. He also surmounted logistical challenges just days after Hurricane Harvey struck to get dramatic videos and interviews with survivors and contractors in Houston.

Bill Elverman, marketer and CMA volunteer, announced the awards in June from Tryon, N.C., while supporting volunteers working on disaster response after the mudslides there. A video including comments from judges is posted on the group’s Facebook page. One judge said Blair tells “riveting stories” that “sing pure journalism.”

Sawyer’s award resulted from his months of persistent wrangling to get the Empire State Building owners to OK the telling of the story, which he first learned about after a photo from the work—happening secretively 42 floors above our office—was entered in ENR’s annual photo contest.