At the 2022 Jesse H. Neal Awards held April 26 in New York City, ENR’s editorial team walked away with three category wins and were runners up for best in show. The 68th annual event, held by the Software & Information Industry Association, honors outstanding work in business-to-business journalism.

ENR took home top honors in the Best Use of Video/Webcast category with three videos highlighting an HVAC innovator and the construction of a 3D printed house and a towering bridge in Turkey. For Best Technical/Scientific Content, ENR won with a trio of articles, the first of which delved into construction efforts on land, the second on work over water and the third on efforts tied to space travel—highlighting NASA’s effort to take the U.S. back to the moon. 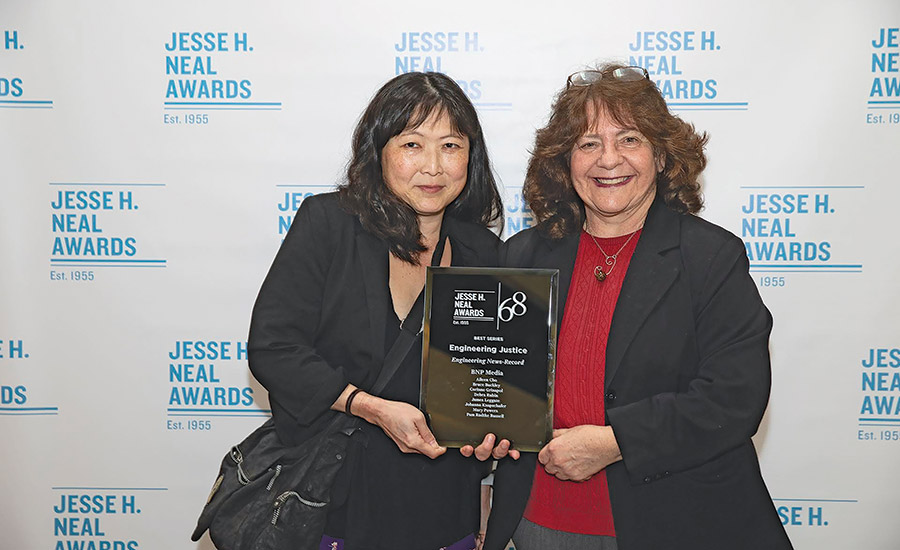 The Best Series category winner, Engineering Justice, was also named second runner up for the Grand Neal award, which means that out of hundreds of submissions, 236 finalists and 61 winners, this entry earned third place overall. In the series, ENR examined how AEC firms, community advocates, planners, regulators and others are addressing past and present infrastructure inequalities, such as where pipelines and power plants are sited and where roads get built.

“The growing activism of communities to the impacts of infrastructure in their midst is a story that ENR began covering several years ago, well before this series, as we saw advocates' efforts to challenge projects to insure all voices are heard, and how courts, governments and others were responding," says Editor-at-Large Debra Rubin. "We aimed to inform industry design and construction professionals how these changing dynamics will affect, and already are affecting, how they do their jobs."

Transportation Senior Editor Aileen Cho added that "We were all proud of our Engineering Justice series, which had so many ENR team members involved that not all could be included on the plaque. We hope that this series raises awareness and inspiration in the industry to build better societies, literally and figuratively, and that it contributes to diversity, inclusion and justice.” She also worked on the two other winning entries