Mary B. Powers
No Comments
The Long Island Power Authority will decide on Jan. 25 whether to approve a 90-MW wind farm 30 miles off the coast of Montauk.
Read More

Mary B. Powers
No Comments
Three executives of contractor LPCiminelli Inc., three New York power and commercial developers and a former SUNY president are among nine charged in a 79-page US criminal complaint alleging bribery, bid-rigging and influence-peddling on state-funded projects.
Read More 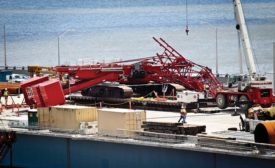 Aileen Cho Jeff Rubenstone
No Comments
An investigation is underway into a crane collapse at the site of the new Tappan Zee Bridge in New York.
Read More 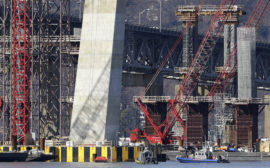 By the Associated Press
No Comments
The collision occurred near the scene of a 2013 boat crash that also involved a Tappan Zee Bridge construction barge.
Read More 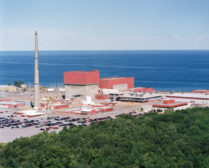 Mary B. Powers
No Comments
The plan would require 50% clean power by 2030.
Read More

Carolina Worrell
No Comments
Related Links: North Dakota Is Bakken Business Studies Find No Link Between Fracking, Water Contamination New York Gov. Andrew Cuomo's (D) announcement that he would ban high-volume hydraulic fracturing, more widely known as fracking, was praised by environmental groups but largely criticized by those in favor of the oil-and-gas recovery method as a way to revive economically depressed areas in the state.However, some firms that work in the sector say they expect to see little change as a result of Cuomo’s Dec. 17 decision since the state has had a temporary ban on fracking since 2008.Cuomo’s action is based on
Read More

Esther D'Amico
No Comments
New York State Gov. Andrew Cuomo (D) has made $30 million in funding available for solar and biogas projects in New York City and the Hudson Valley that generate more than 200 kilowatts of power.   The New York State Energy Research and Development Authority is seeking proposals for these projects by Dec. 30. Projects must be installed, interconnected to the grid and operational by April 30, 2015. The funding can be used to provide financing for half of total installed costs of systems and is capped at $3 million per project and $6 million per applicant. The funding is
Read More

Esther D'Amico
One Comment
New York State has entered the next stage to secure a $1.5-billion federal loan for the Tappan Zee Bridge replacement project, Gov. Andrew Cuomo announced March 8. The state, which is seeking a low-interest loan to help finance and lower bridge tolls for the $3.9-billion project, had applied for a $2-billion loan under the U.S. Dept. of Transportation's (DOT) Transportation Infrastructure Finance and Innovation Act (TIFIA) program.   The NYS Thruway Authority awarded the design-build contract last December to Fluor-led consortium Tappan Zee Constructors, which bid $3.142 billion for the project.   In his March 8 announcement, Cuomo said the
Read More

Update: Cuomo Closes Bridges, Tunnels as Area Battens Down the Hatches for Sandy

Esther D'Amico
No Comments
Gov. Andrew Cuomo has announced today, Oct. 29, that the Tappan Zee Bridge (TZB) closed at 4 p.m. and both the Hugh Carey and Holland tunnels closed at 2 p.m. as Hurricane Sandy bore down on the New York City region with storm gusts of up to 80 to 85 miles per hour. NYC bridges are "quickly becoming unsafe," Cuomo said in a statement. However, they will remain open to emergency vehicles and personnel. Other bridges to be closed include the Throgs Neck, Bronx-Whitestone, Verrazano-Narrows, Henry Hudson, Marine Parkway-Gil Hodges Memorial, Cross Bay Veterans Memorial, and George Washington. The Staten
Read More

Esther D'Amico
No Comments
Gov. Andrew Cuomo’s office has begun to specify a slew of major infrastructure projects statewide that will receive funding under the newly created NY Works Task Force economic development program. The program, which the governor calls the “centerpiece” of his $132.6-billion budget that passed last week, includes an investment of $1.2-billion to accelerate road and bridge improvements. The program will accelerate state investments in improvements to hundreds of miles of roads, bridges as well as parks and historic sites. Investments announced the week of April 2 include $460 million to replace New York City’s Kosciuszko Bridge; $145 million for bridge
Read More
More Articles Tagged with 'Governor Andrew Cuomo'
Subscription Center
More Videos