Carolina Worrell
No Comments
An ironworker helping install a green roof on Barclays Center in Brooklyn was killed Feb. 24 when a load of steel joists rolled off a delivery truck and crushed him, says Joe DePlasco, a spokesman for developer Greenland Forest City Partners.Peter Zepft, 52, was acting as a flagman when a delivery truck driver was unstrapping a load of steel trusses in preparation for a crane pick, officials say.The load shifted and one or more joists fell off the truck, striking Zepft, who died at the scene.DePlasco adds that Zepft was an employee of Massachusetts-based James F. Stearns Co., a steel
Read More

Speaking Out on the Nation's Infrastructure Needs

Carolina Worrell
No Comments
When veteran engineer Andrew W. Herrmann speaks to the public about the critical state of the nation's infrastructure, his passion is evident. Related Links: 60 Minutes clip: Andrew Herrmann on deficient bridges Featured ENR New York People ENR New York "As a parent, if my children came home with Ds on their report cards, I'd be very upset," he said when interviewed on the History Channel's 2009 documentary "The Crumbling of America," which cites the D grade given to the nation's infrastructure by the American Society of Civil Engineers. Herrmann, who has held numerous positions at ASCE including serving as
Read More

Carolina Worrell
No Comments
Image Courtesy of BBS Architects, Landscape Architects and Engineers Upgrade: John F. Kennedy High School is one of seven schools in the Plainview-Old Bethpage Central School District that will be receiving upgrades under the $50-million bond-financed construction program. Construction is set to start this summer on nearly $50-million of school upgrades in the Plainview-Old Bethpage, N.Y. Central School District following voters’ approval last month of a school bond to finance the work.Dubbed “Building Futures Together,” the construction program funded by the $49.8-million bond will encompass seven schools and two other buildings owned by the district. Work will focus primarily
Read More

Carolina Worrell
No Comments
The U.S. Army Corps of Engineers’ New York District, has awarded a $25.6-million contract to Great Lakes Dredge & Dock Co., Oak Brook, Ill., to deepen the Arthur Kill Channel located between Staten Island, N.Y. and Union County, N.J.The contract, awarded on Dec. 9, is cost-shared with the Port Authority of New York and New Jersey, and is part of an extensive harbor-dredging project to create “safe and efficient channels for vessels that will be calling at the Port of New York and New Jersey,” the Corps says. Notice to proceed will likely be issued later this month, says contract
Read More

Carolina Worrell
No Comments
Related Links: North Dakota Is Bakken Business Studies Find No Link Between Fracking, Water Contamination New York Gov. Andrew Cuomo's (D) announcement that he would ban high-volume hydraulic fracturing, more widely known as fracking, was praised by environmental groups but largely criticized by those in favor of the oil-and-gas recovery method as a way to revive economically depressed areas in the state.However, some firms that work in the sector say they expect to see little change as a result of Cuomo’s Dec. 17 decision since the state has had a temporary ban on fracking since 2008.Cuomo’s action is based on
Read More

Carolina Worrell
No Comments
Rendering Courtesy of The Moinian Group Sky High: The 1,174-unit 605 West 42nd Street residential building is the largest rental project under construction in Manhattan. Vertical construction on the 1.16-million-sq-ft 605 West 42nd Street luxury residential tower is completed with remaining work set to finish some time next year, including enclosing and fitting out the building, say developer The Moinian Group and construction manager Tishman Construction.The 1,174-unit rental building, the largest residential rental project under construction in Manhattan, is designed by Goldstein Hill & West Architects LLC.It will feature studios and one and two-bedroom residences to accommodate 939 market
Read More 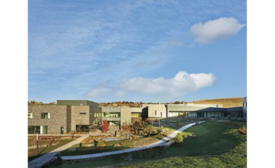 From a visitor center at Washington State University with a budget of under $2 million to a dock removal job that took place in just three months, this year's Best Projects competition showcases a broad range of work from across Alaska, Oregon and Washington.