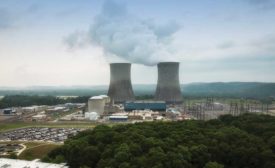 Mary B. Powers
2 Comments
The Tennessee Valley Authority is working to determine what caused the structural supports of a refurbished condenser to fail and how best to repair the damage at the newly commissioned Watts Bar 2 nuclear unit on the Tennessee River.
Read More 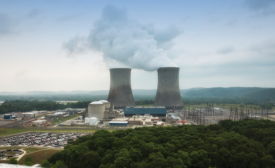 TVA Restarts One Nuke Site But Continues Sale of Another

Mary B. Powers
No Comments
Commercial operation of the long-shuttered second unit at the Tennessee Valley Authority’s Watts Bar nuclear plant in Tennessee got underway earlier this month, the first U.S. nuke reactor to start up since 1996, when a sister 1,150-unit came on line.
Read More 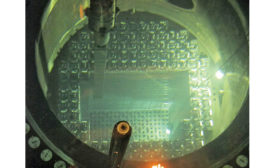 Mary B. Powers
No Comments
The Tennessee Valley Authority this week plans to begin pouring the concrete foundation for a 12,000 sq ft building that the designer is calling a “finger of God build.”The reinforced concrete building is meant to withstand a 10,000-year earthquake. “We hope we don’t see it tested, but if it is we hope it stays,” says Robert Feiel, project engineer for Mesa Associates, Knoxville.The diverse and flexible coping capability building, or FLEX, was developed by the U.S. Nuclear Regulatory Commission from the lessons learned in nuclear plant safety as a result of the Fukushima Daiichi accident in 2011. It provides an
Read More

Mary B. Powers
No Comments
The Tennessee Valley Authority has added three years and $2 billion to its estimate to complete a partially built nuclear unit at its Watts Bar plant in Tennessee.
Read More

Mary B. Powers
No Comments
Photo courtesy of TVA Watts Bar plant unit 2, idle since 1988, is set for 2013 completion. In what it says is an effort to improve efficiency and eliminate confusing lines of authority and duplication of effort, the Tennessee Valley Authority has relieved Bechtel Corp., based in San Francisco, of construction-management duties at the $2.5-billion restart of unit 2 at TVA's Watts Bar nuclear powerplant.The federal power producer renegotiated its engineering, procurement and construction contract with Bechtel Power after the project's schedule slipped during the summer, says Terry Johnson, a TVA spokesman. “Fundamentally, we established a level of productivity, and
Read More
Subscription Center
More Videos