Amidst the constraints of weight limits, a seawall, a waterfront restaurant and high-voltage power poles, crews from ICI Interwest Construction Inc. and heavy mover Oxbo Mega Transport Solutions positioned a $20 million, 282-ft-long pedestrian and utility bridge in place this fall along the Everett, Washington, waterfront.

As noted by ENR subscriber Bill Hawkins, the “bridge move went off without a hitch” and required a 90-degree rotation and move toward elevated foundations while crossing five lanes of traffic and five railroad tracks.

The bridge, designed to carry storm drainage and sewer pipelines across a steep slope, railroad tracks and West Marine View Drive replaced a deteriorated underground pipeline while providing pedestrian access to the waterfront. Placing new pipes on a utility bridge will make them more accessible for inspection and maintenance, open up space for future water-main crossings and allow work to move away from the landslide-prone slope. 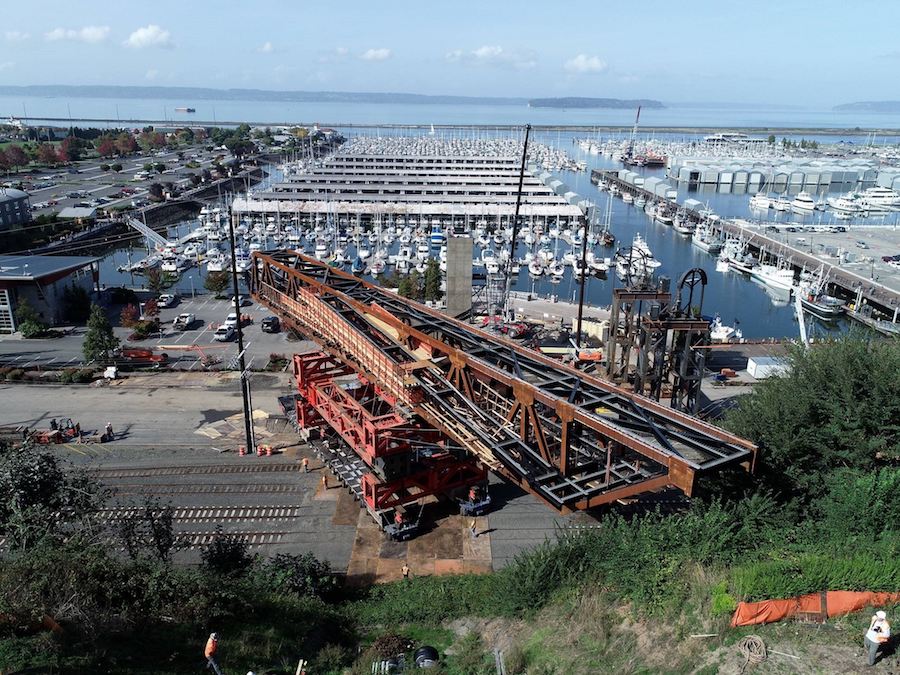 The design team on the $19.3-million Grand Avenue Park Pedestrian Bridge project developed a pedestrian bridge that preserves views and minimizes interventions into the steep, 75-ft-tall hillside. LMN architects say that by deconstructing the elements of the project—functional, aesthetic and environmental—and reimagining the parts, the team created accessible pathways into a sloped truss and eliminated the need for an elevator.

Integrating vertical circulation above, around and within the truss, two ramps create a pathway, acting as switchbacks to reduce the grade change and frame a series of views to Whidbey Island, the waterfront and the Olympic Mountains. The ramps bring pedestrians through a sequence of spaces that include a cantilevered portion over a highway below and a section within the truss itself. Platforms along the path allow for views of the landscape.

Drawing inspiration from railroad overpasses of old, the weathered steel truss of the bridge frame was strategically positioned by engineers KPFF to echo the ramp volumes and position over the active railway below, which also allowed for ease of installation. Stormwater overflow piping—a key component of the project—tucks beneath the pathway. The potential for a future water main crossing was also incorporated into the bridge design. 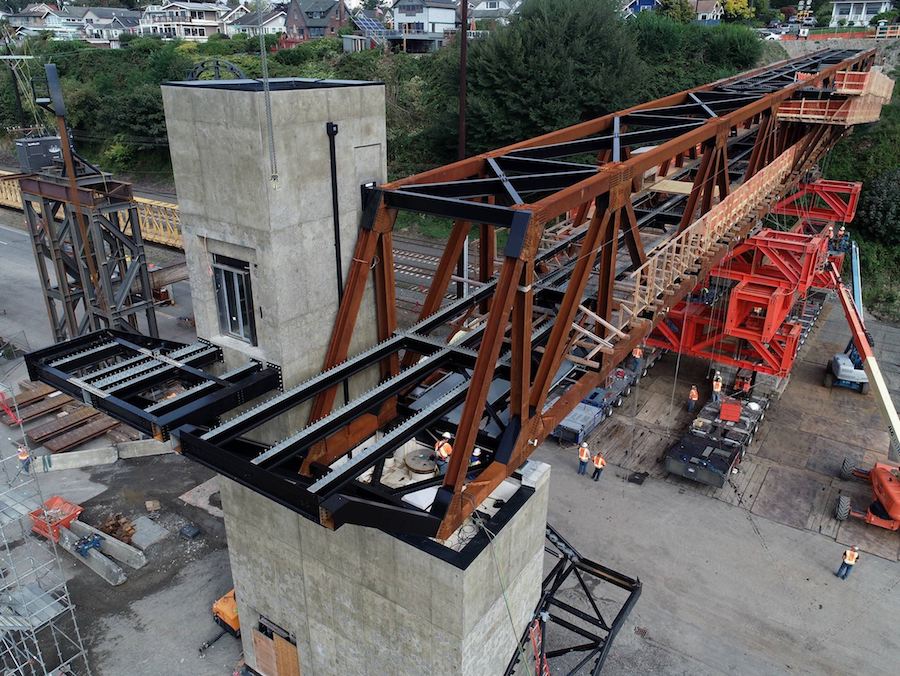 To create more of a design flair, custom-designed aluminum panels to serve as safety rails, light reflectors and a visual element. The panels feature a water jet-cut geometric pattern meant to remain minimal to facilitate views, while becoming denser when needed to better reflect pathway lighting. The geometric pattern repeats at the base of the tower where it is sandblasted into the concrete.

Hawkins says the move took about two hours and required covering railroad tracks with crushed rock and steel plates. The tracks were returned to use later in the day.

With the bridge moved and set into place, crews still needed to create an east access ramp, finish the west tower stairs and pour the pedestrian bridge deck, expected by the City of Everett to wrap up by 2020.