Nestled between two historic early 20th-century buildings, The Mark in downtown Seattle makes the most of its quarter-block footprint.

The new 48-story tower curves around the 1908 former First United Methodist Church, the country’s oldest Beaux Arts-style building, and the 1904 Rainier Club building. ZGF Architects and structural engineers from Arup USA made the office and hotel project work by taking 15,000 sq ft of available space on The Mark's first level and then subtly sloping the tower over the existing historic structures. The lower northwest corner cantilevers over the former church by more than 20 ft before tapering back through a sequence of triangulated building planes.

Using a “mega-brace structure” to shift the load away from the core and to the exterior walls, engineers created a system that allowed for a smaller core while still creating column-free floor plates for interior flexibility. The first structural system of its kind in a highly seismic area, the style was designed to withstand a 2,475-year quake registering as high as 9.0 on the Richter Scale. Arup tested it nearly 30 times, simulating the impacts of recorded ground motion from seven real earthquakes. 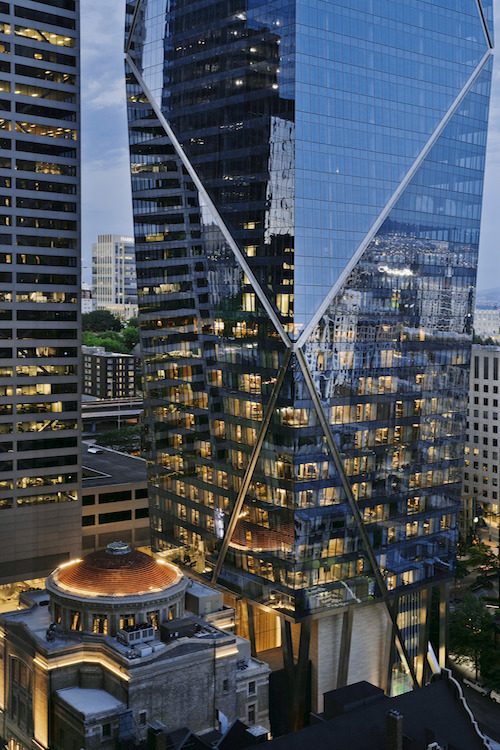 The mega-braces create straight diagonal lines that meet at corner points on levels 16 and 28, the latter of which is the largest floor plate. For forces to transfer between the mega-braces and the floor diaphragms, the braces must meet the floor at the same point where a column or another brace meets the floor. The geometry of the entire tower is based around the locations in space of such nodes to ensure a sufficient number of floors participate in the coupling of core and perimeter frame.

The faceted scheme, with fewer lateral elements configured at open angles, increases the vertical emphasis of The Mark. Shifting the load away from the core and to the exterior walls eliminates view-obstructing elements like internal columns and reduces core size.

A glass connector also links the Mark to the historic The Sanctuary building — the former church site’s new name as an event space.

Under the ownership of Daniels Real Estate and Stockbridge Real Estate, The Mark is now complete and will welcome tenants in 2019. Along with ZGF Architects and structural engineer Arup, JTM Construction served as the construction manager/general contractor; Coughlin Porter Lundeen the civic engineer; Syska Hennessy Group Inc., The Rushing Group, Auburn Mechanical, Cochran and Hermanson Co. the mechanical, electrical, plumbing engineers; and environmental work was by EA Engineering, Science and Technology.