Allen Zeyher
No Comments
Hoping not only to improve transportation options and lower infant mortality rates in disadvantaged communities but also to serve as a case study for other cities, Columbus, Ohio, has won a $40-million grant from the U.S. Dept. of Transportation’s Smart City Challenge.
Read More

An $803-million interchange project will receive a tax-exempt bank loan.

Seven candidates will develop proposals regarding technology and urban planning for the U.S. DOT. 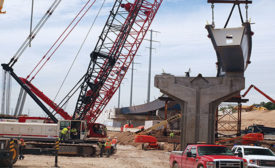 Rather than working from reams of paper, the Wisconsin Dept. of Transportation (WisDOT) opted to reconstruct the Zoo Interchange in downtown Milwaukee by working from gigabytes of 3D data—modeling virtually every aspect of the $1.7-billion project.

Allen Zeyher
No Comments
Bridge inspections reached a huge milestone in April, when the Federal Highway Administration (FHWA) began collecting “element-level” bridge condition data from state departments of transportation.In an element-level bridge inspection — mandated by the latest highway bill, Moving Ahead for Progress in the 21st Century (MAP-21) — “each square foot of the bridge deck, and its other elements, such as the joint seals, receive a separate rating,” according to a statement from the FHWA. “Dividing bridge components into smaller, more manageable elements will ensure engineers understand the extent of bridge deterioration, which will help them make more informed decisions about repair,
Read More

Allen Zeyher
No Comments
Related Links: Protests Push the Public Procurement Process In a change endorsed by the Federal Highway Administration, the New Mexico Dept. of Transportation will take contractors' past performances into account when they bid on highway projects over $5 million.NMDOT believes the procedure will result in lower costs and delays. The Associated Contractors of New Mexico (ACNM) thinks the new rule will result in less competition and higher bid prices.CHURCH"Our goal is to change New Mexico contracting from 'low bid' to 'quality bid,' " says NMDOT Cabinet Secretary Tom Church. "This process will encourage the good contractors to continue with excellent
Read More
Subscription Center
More Videos