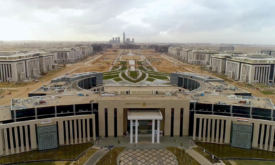 Designed by U.S.-based Skidmore Owings and Merrill, the project consists of three phases, with first-phase development estimated at $58 billion when finished in 2030; several buildings are set to complete in 2022. 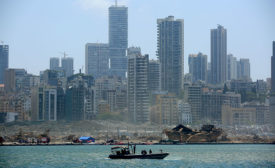 Gary Lakes
No Comments
Boskalis After an $8-billion investment and 12 months of construction, Egypt completed the expansion of the Suez Canal, which opened to traffic in early August. Related Links: Egypt Launcehs Suez Canal Expansion Project The Egyptian government and the Suez Canal Authority (SCA) on August 6 inaugurated the newly expanded Suez Canal, part of an overall $8 billion investment designed to increase ship traffic through the international waterway and also encourage new investment in Egypt. The government is hoping to attract new industries and infrastructure to the canal area to a degree that it would create a new international trade entrepot. Egyptian
Read More

Gary Lakes
No Comments
Enlarge Map by BP The Southern Gas Corridor consists of three huge pipeline projects: the South Caucasus Pipeline Expansion (SCPx), the Trans-Anatolian Pipeline (TANAP) and the Trans-Adriatic Pipeline (TAP). SCPx gets underway in January 2015. TANAP will break ground later in 2015, and TAP will break ground in 2016. Enlarge Map by BP Shah Deniz's phase two will require massive investment, including two offshore platforms, subsea production wells and pipelines, a new terminal in Songachal, Azerbaijan, and two new compressor stations in Georgia. Getting a new source of gas supply to Europe has been a topic of discussion within the
Read More

Gary Lakes
No Comments
Photo by AP Wideworld Since August, a number of contracts have been signed for infrastructure and dredging work. Related Links: Egypt Moves Forward on $6-Billion Petrochemical Project Expansion in Natural Gas Production Spurs Big U.S. Export Plans In an attempt to rekindle national pride and demonstrate his administration’s ability to move the country beyond a turbulent political period, Egyptian President Abdel Fattah al-Sisi last August announced that the Suez Canal would be expanded to enable more vessels to transit the waterway and boost the country’s revenues.Now in the early stages of construction, the expansion project is estimated to cost $4
Read More
Subscription Center
More Videos