Contractors in Atlanta are staying busy as they work through lingering project backlogs left over from the COVID-19 pandemic. However, a slowing economy on the horizon and troubles for tech companies may be putting on the brakes in coming years. Contractors are still feeling the effects of supply chain delays—especially in the major equipment market—as well as both craft and labor shortages, says Greer Gallagher, senior vice president in Holder Construction’s Atlanta office.

“There is more uncertainty in the market today with rising interest rates and the capital markets tightening than in the past several years,” Gallagher says.

Contractors are faring well in the Atlanta market today, she says, continuing to work off those remaining backlogs, but they’re starting to hear reports of a slowing economy and layoffs, especially from tech companies that have driven a lot of the recent growth. 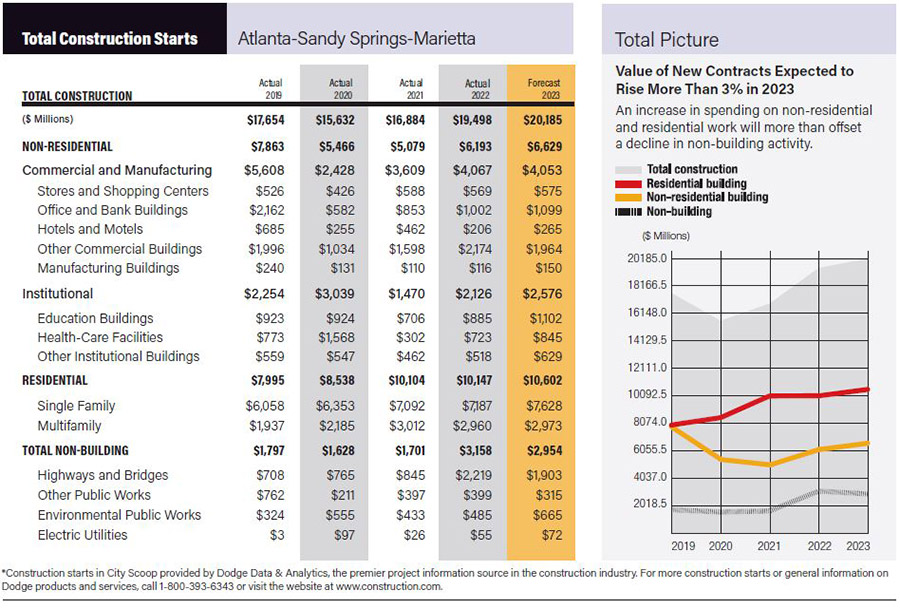 The economy will continue to be a drag on the region through 2023, Gallagher says, with high inflation, rising interest rates and recent layoffs causing project delays or cancellations.

“Depending on the specific asset class, there still seems to be demand for new product, creating a healthy backlog for sectors like industrial, multifamily, data center/technology and infrastructure projects,” she says.

The Infrastructure Investment and Jobs Act continues to drive work at Hartsfield-Jackson Atlanta International Airport as well as at smaller regional airports, she says, while demand for publicly funded university work remains steady.

The infrastructure bill, as ENR reported in July, earmarks $40 million to modernize the 40-year-old Concourse D at Hartsfield-Jackson, along with enlarging holding rooms, restrooms and the airport’s central corridor.

The airport is in the midst of its ATLNext program, a series of projects over the next 20 years designed to boost capacity, renew and replace existing facilities and enhance its aesthetic appeal, the airport says. Projects include a central passenger terminal complex, hotel and travel plaza and airside upgrades.

“Science and technology and advanced manufacturing continue to be a bright spot in the market as firms are continuing to move to the area,” she says.

But the office sector has slowed amid a higher level of uncertainty around the potential future demand—or lack thereof—for office space as companies figure out their workplace strategies and remote work policies, Gallagher says.

In Braselton, Ga., just outside Atlanta, the Northeast Georgia Health System has launched work on a $565-million expansion of its hospital there. Turner Construction began work on the project in November 2022.

The 235,000-sq-ft expansion will nearly double the facility’s capacity and is just one of several major construction efforts the health system has underway, alongside projects like 927,000-sq-ft multistory tower for the system’s flagship Gainesville campus, being built by Brasfield & Gorrie.

According to Dodge data, construction starts for Atlanta in 2023 are set to increase in residential and non-residential sectors while dipping slightly in total non-building starts.

Companies are also focused on locations offering an active 18-hour day, she says, with food and beverage options that will create opportunities for associates—who are expected to drive attendance at offices—to gain experience.

Those associates are also viewing the C suite as one of the newest amenities, as the younger workforce wants to learn from and be visible to company leaders, she says.

Companies are also feeling pressure to achieve their ESG goals (environmental, social and governance) through real estate projects, Gallagher says. While the environmental piece has been a focus for many years, additional attention is being paid to the social impact a project may have on its surrounding community.

With new ratings systems being developed and rolled out, Gallagher notes that there are now much easier ways for contractors to lay out a plan and measure their progress.