The Nancy Pauw Bridge crosses the Bow River in the Town of Banff, Alberta, now connecting the commercial district north of the river with pathways to the Cave and Basin National Historic Site and Banff Recreation Grounds south of the river, says Adrian Field, town director of engineering. Some 8,000 daily visitors can now cross the bridge in summer, and it potentially eliminates 3,000 vehicle crossings daily.

“Sustainability is at the heart of many of the things we do and … the genesis of this project,” says Field, referencing the town's decades-long effort to improve pedestrian connections.

“Designing a structure that did not impinge in any way on the park and could be built with zero disturbance at the waterline … was paramount, so we built that into the RFP,” Field adds. This helped streamline approvals from Parks Canada and the provincial Dept. of Fisheries and Oceans.

Structural engineering and timber construction firm StructureCraft began eight months of design of the $3.7-million bridge in August 2021. Construction started in November on early civil work and piling, followed by excavation for bridge foundations in December. Crews began structural work in late February 2022, leading to the seven-hour erection of the bridge on May 10. 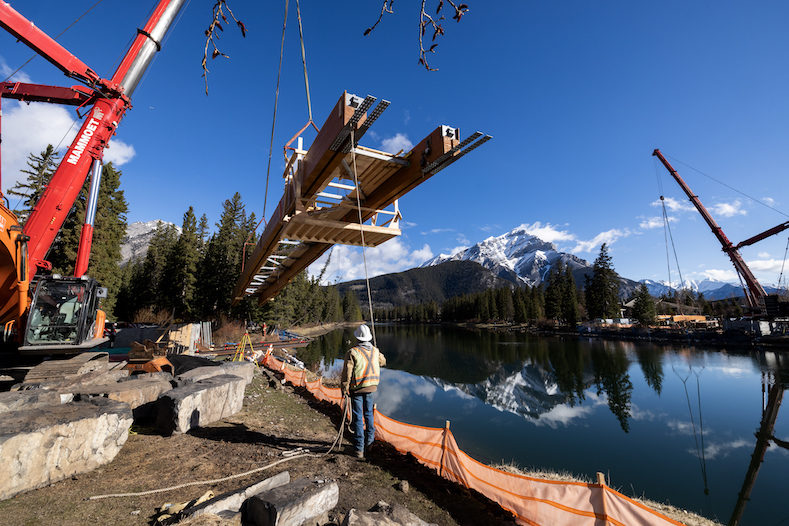 The contractor was able to complete construction related to the bridge deck and rails in six months, leading to the early September bridge opening, marking substantial completion of all structural work and landscaping. Due to supply chain issues, lighting installation was finished in December, marking final completion.

The bridge work was supported by $2.5 million(CAD) in funding from the Wim and Nancy Pauw Foundation in 2020 and the $2.2 million(CAD) from Investing in Canada in 2021, in addition to $800,000 from the Town of Banff. It is the third footbridge constructed by StructureCraft for the town.

The town's first mandate seemed simple enough—wood and stone should be the only materials visible. “What is simpler than a wooden beam on stones?” asks Epp. However, he says, the team was “constrained on all sides" by a host of technical requirements making it "one of the most technically challenging projects of my 40-year career,” he says.

Those technical challenges included keeping the bridge's slope to no more than 5% for handicap access to both the bridge and ramps and utilizing low-profile ramps that would not extend too far into the park. At the same time, the contractor needed to design and build the bridge with sufficient clearance for elk passage underneath and to accommodate a 100-year flood.

The contractor first had to figure out how to build a shallow arch span on silty soil. That included knowing how to respond if it encountered large boulders while piledriving in the riverbed, says Leon Treder, StructureCraft project engineer.

To understand the soil structure interaction of the bridge and the abutments, the team used Dlubal RFEM 3D structural analysis software and teamed with geotechnical consultant Thurber Engineering Ltd. on soil analysis to understand what data to include in its overall calculation model, says Treder.

“To build a shallow arch, you have to figure how to develop the thrust force in that arch,” he says. The load of the “enormous” horizontal force of the shallow bridge was supported by the 16-ft wide (4.9m) by 12-ft (7-m)-thick abutments, each designed to resist 1 million lb, says Epp. “That’s the key to making this work.” To add stiffness and protect the timber from the river, the team anchored tapered weathering steel haunches to the abutments.

Minimizing vibrations is a key concern for slender bridges, Epp says, “You don’t want to be uncomfortable walking across the bridge looking at the view when somebody jogs by." To reduce mechanical vibrations, the contractor designed, fabricated and installed a central mass-tuned damper made of weathering steel that comprises “a simple mass of steel plates on a carriage suspended from cables stretched to four points on the girders” beneath the bridge, according to the company's website. 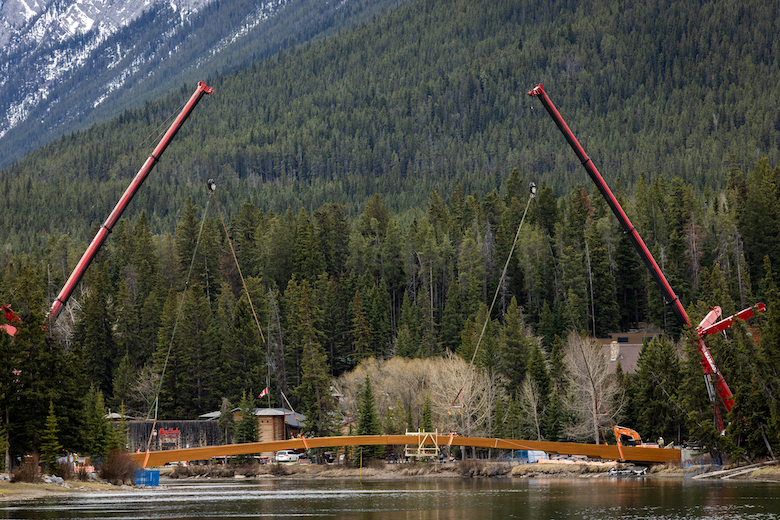 Following two months of planning—with a need to erect the bridge in a single day—the contractor mobilized cranes on May 11. “There was not much margin for error,” says Treder. That required careful preplanning, including running a test crane pick with heavy-lift specialist Mammoet to ensure the rigging was exactly the length needed “so we knew both sections had the right slope for the big day,” he says.

With a compression arch and abutments designed to take the thrusts, the bridge was formed when two 131-ft-long (40m) prefabricated Douglas fir glulam bridge sections met at the center to connect with the “knuckle” (male-female hinge) designed by Epp and Treder. The team had to consider “how to make sure these sections actually form an arch and are perfectly tight when they meet,” Treder says. The length of each section needed to be accurate within a 0.25-in. (6mm) tolerance.

Succeeding in this complex maneuver required understanding material and attention to minute detail, such as hearing how the beams respond during the erection, Field explains. “When the beams are lifted into place you can hear and feel the strain in those components,” he says. The sound of the beams “was an indication that all of the slack was coming out as the bridge went into compression,” Epp says.

"When the big south side section started to fly in first, we made sure it was secured before the workers accessed it,” Treder recalls. "Then the second piece flew in shortly after with no problems because we had test picked and everything was prepared," Epp says. “It fit perfectly and only had to be adjusted by 3/8 of an inch.” By 2:30 p.m., seven hours after work had begun, the bridge's erection was complete.

Treder recalls how after cutting the crane loose the two big sections arched up over the river “in a moment of quietness… It was magical."