When it comes to water, the state of California in recent years has faced the dilemma of having too much or too little. Although the land is parched and river washes run dry, more intense storms brought on by climate change are expected to increase the frequency of significant floods. As a result, identifying places to store surplus water when available has become a critical component of sustainable water management, according to state and local water officials.

“One of the outcomes of climate change is we’re going to get more extreme flash floods even during droughts … how do we capture those high flows to recharge the basins?" asks Paul Gosselin, deputy director of sustainable groundwater management at the California Dept. of Water Resources. "Having data and a greater understanding of basic conditions and how flows occur is going to be critically important, especially when a lot of agencies are looking to increase and develop recharge projects.”

An effort involving state and local water agencies, Stanford University, the University of California- Davis and others is focused on using a relatively established sensor technology in a new way to gather the information that agency officials need to make decisions about where to site recharge locations to store surplus groundwater until it is needed.

The technology—airborne electromagnetic (AEM) surveying—has been around for more than 40 years as a tool to identify groundwater resources, says Rosemary Knight, a Stanford professor of geophysics at the Doerr School of Sustainability who was an early advocate for using it to map the architecture of groundwater systems across the state. AEM technology has become much more sophisticated over the past 15 years, she says, so much so that data can be obtained down to 400 meters beneath the earth’s surface in some areas.

Using a geophysical instrument array towed beneath a helicopter, the AEM method measures subsurface electromagnetic changes to identify conditions, whether for groundwater, hard rock, or sand, gravel or silt.

The technology also can help identify underground paleo channels—former rivers or streams that have been filled in with sediment, silt or rock.

Knight has studied the use of various imaging techniques to understand geophysical structures for 30 years, and in 2015 worked with Wyoming-based Aqua Geo Frameworks to use AEM technology to analyze the groundwater system in Tulare County in California’s Central Valley.

Since California enacted the Sustainable Groundwater Management Act in 2014, which established agencies across the state to develop plans for sustainable groundwater management, interest in AEM data has intensified, Knight says. “Groundwater managers everywhere came to realize they really didn’t know much about what their groundwater systems looked like,” she says. 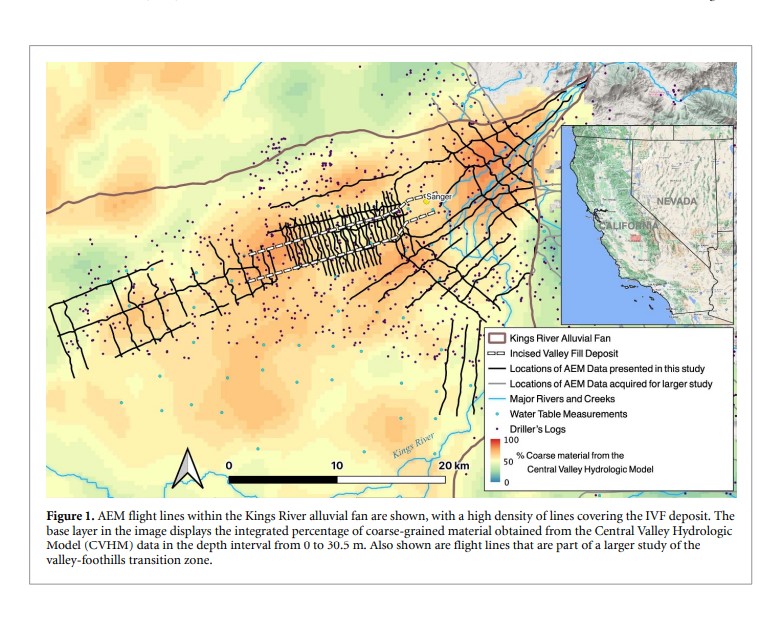 In 2016, along with Graham Fogg, a hydrology professor at UC-Davis, and Gosselin, who at the time oversaw Butte County, Calif.'s groundwater management, Knight wrote  an influential white paper suggesting that using the technology would be a game-changer for managing state groundwater.

The traditional method usually involves drilling wells, which can show what the conditions are at the exact location of the well, but not much else. “Groundwater systems are so heterogeneous. They vary so much from one location to another that it’s impossible to ever have enough well data to get the … density of information you need to truly understand the functioning of a groundwater system,” Knight says.

The 2016 paper was sent to the governor's office and led to the 2018 enactment of Proposition 68, which included $12 million for groundwater mapping projects using AEM technology. Knight’s team at Stanford led a two-year pilot called The Groundwater Architecture Project to develop a methodology for acquiring the data, and a technical advisory committee of local, state and federal stakeholders was established.

California’s water resources agency now is developing a resource, the online AEM Data Viewer, to provide information that sustainable groundwater management agencies need to make decisions about where to site underground groundwater reservoirs. The data, which are being added on a rolling basis, identify not only potential underground recharge sites, but also subterranean pathways—the paleo channels—where conditions are optimal for groundwater to travel to these locations, naturally.

Kassy Chauhan, executive director of the North Kings Groundwater Sustainability Agency in Fresno County, says the data will be invaluable in identifying potential sites for underground recharge. The agency is one of seven that comprise the over-drafted Fresno basin in the Central Valley.

An interesting surprise, Chauhan says, is that the AEM data have identified sites that her agency had not initially considered—transitional areas between hard rock close to mountainous areas and more porous soils on the valley floor.

Finding the best sites is sort of like finding a needle in a haystack, she says, using traditional well boring methods. “You could punch up 100 borings and not find the needle … whereas with the helicopter [AEM] you’re able to get a glimpse far below the surface and cover a much broader area,” Chauhan says.