As a representation of the potential of timber construction, the Tianfu Agricultural Exposition pushes the envelope of what’s possible. The largest timber structure in Asia and one of the largest in the world, the project’s five vaults are composed of soaring timber chords anchored with steel webbing, all encased in pretensioned ETFE membranes.

Mass-timber structures are rare in China, but the designers at design firm China Architecture Design & Research Group (CADG) wanted something that would represent the sustainable message and natural setting of the agricultural exposition. CADG worked with structural engineer StructureCraft on the vaults’ distinctive designs, which include 3,500 uniquely curved timber glulam members. “The fire restriction for structural materials in China is the biggest obstacle to the promotion of timber structures,” explains Cui Kai, chief architect at CADG. “What made this project possible was that the spaces under the vaults are defined as exterior space. Only when the vaults were seen as non-building structures could we get around the restrictions for fire codes.” This “exteriorization” of the space also fit the purpose of the structures as exhibition areas for farm products and other semi-outdoor activities, he adds.

After addressing concerns over fire safety and seismic issues, the main challenge was how to translate the 3D designs into something that could be assembled by work crews that may have limited experience in mass timber construction. Additionally, COVID-19-related travel restrictions limited the opportunities for engineers from Canada-based StructureCraft to visit the site in person.

“We created a full, highly detailed fabrication model in Rhino that was able to drive almost the entire construction sequence,” says Lucas Epp, vice president and head of engineering at the Abbotsford, B.C.-based firm. “But how do you tell hundreds of workers in China how to build this, when we were only able to get one person from our company into China during construction?” 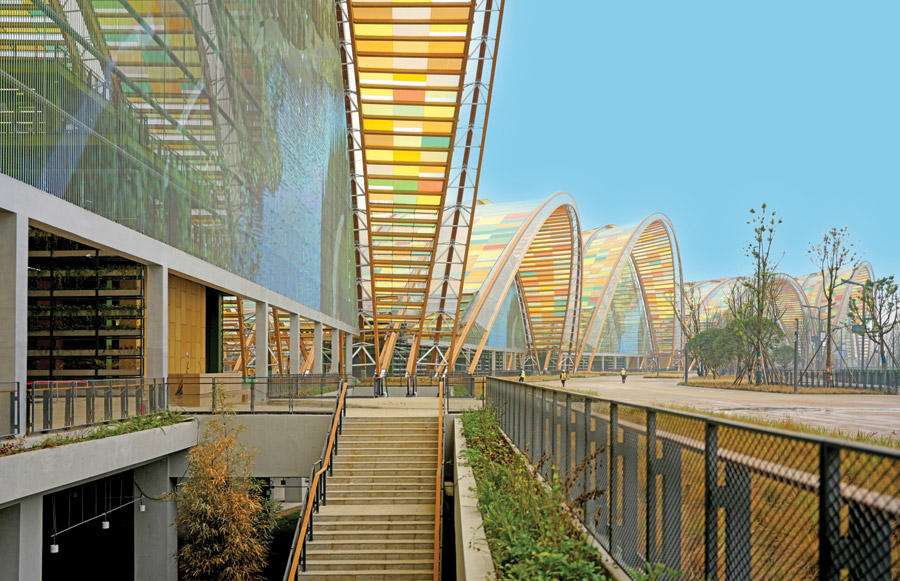 StructureCraft had worked semi-remotely on other projects in China before, but the Tianfu project was on another scale. What the firm settled on was to fully prefabricate the glulam segments in Europe, then containerize and ship them to China ready to assemble. “All the elements were pre-CNC’ed, precut to size, down to screw holes and everything,” says Epp.

But that didn’t make the structural elements any less arduous to design. “A normal truss system would be the traditional design, but the architect wanted to remove the truss webbing,” explains Epp. The resulting design has each arch comprised of a single bottom chord with two top chords connected by simple steel webbing. Steel base connections at each end of an arch transfer the chord forces through steel embed plates into the vaults’ concrete foundations. The simplified design allowed for the glulam members to be shipped in standard shipping containers. 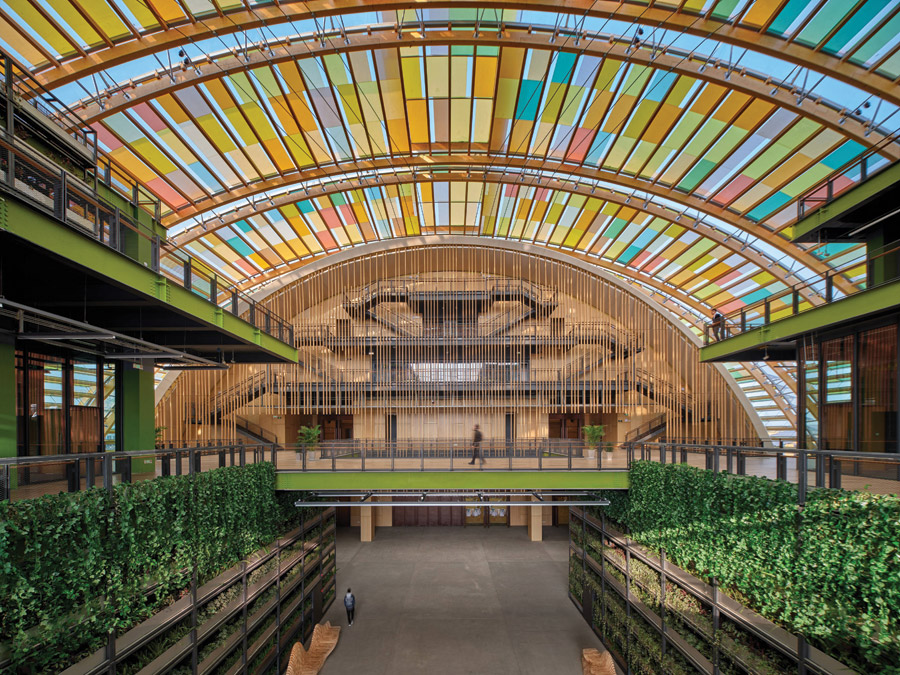 Arriving from Europe, the arches’ prefabricated components were put together into assemblies offsite in China and then lifted into place by cranes on site. The largest of the arches have clear spans of up to 450 ft and are almost 150 ft tall. “These are huge structures, so we were able to automate the creation of the shop drawings [from the 3D model],” says Epp. “It was close to 15,000 shop drawings, all automated.”

Using Procore, StructureCraft was able to coordinate with workers in China on the status of every piece of the arches, documenting any damage or manufacturing errors. “Using Procore allowed us to have every single piece hyperlinked, dive into any specific assembly, drill into that piece, and see the shop drawing,” says Epp. The workers in China would upload photos of each piece as it came in and was installed, appending the images in Procore. “They’d upload a picture in Procore and we’d see it on our iPad a minute later,” says Epp. 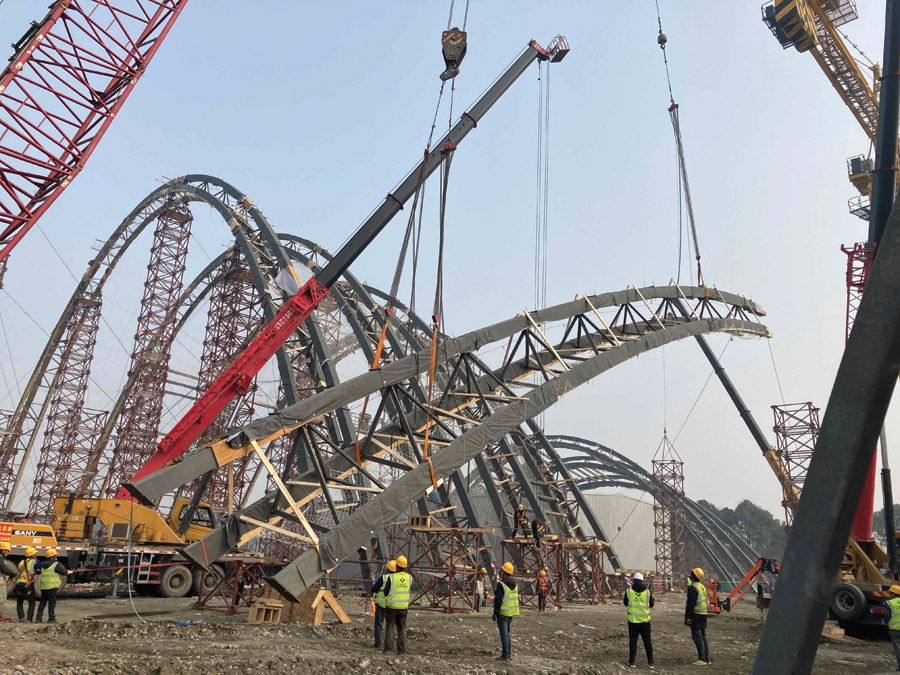 Assembly of the mass timber vaults was also complicated by an aggressive project schedule that saw the interior spaces of the vaults being built out while the vaults were still being erected above them. According to Epp, this led to some quick revisions to the staging effort, as planned shoring towers for the arches were found to be sited in spots no longer accessible. “We used these dynamic shoring towers, with lots of adjustable jacks and hinges so they could work across different angles of the chords,” he says. Assembly of the vaults took six of the 15 cranes on the site, including a few 500-ton crawler cranes. 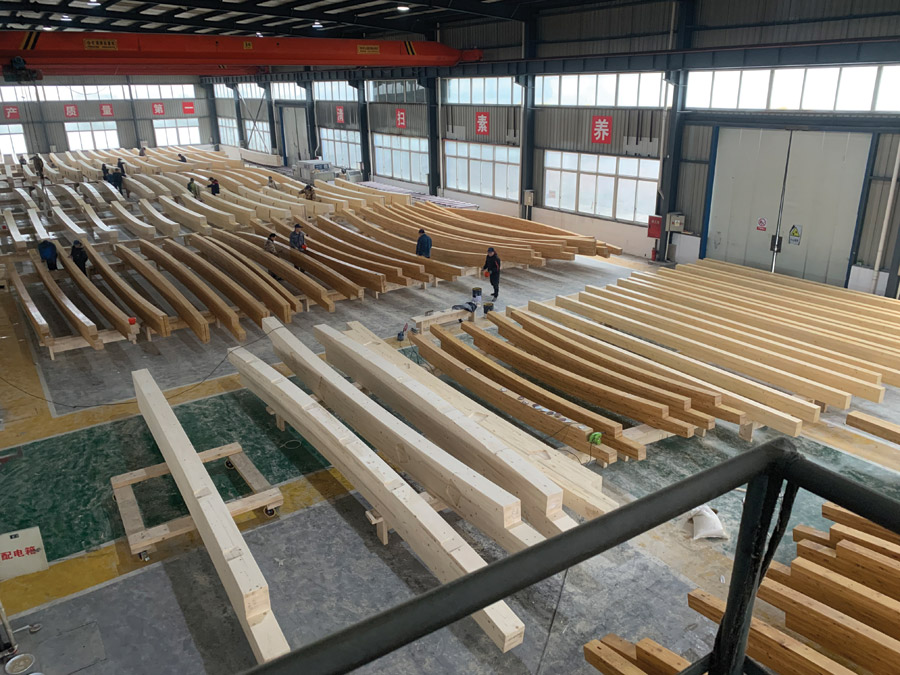 While mass timber is still gaining acceptance in China, where structural steel and concrete are widely used, Epp says the Tianfu project is already drawing attention. “This is a landmark for timber in China,” he says. The national review committees for seismic and fire standards that signed off on the project included architects and engineers from across China—who saw that it was possible, Epp adds. “We wanted what the architect wanted—a sustainable vision. And we found the technical challenges were surmountable.”

Cui Kai of CADG agrees. “The success of this project has drawn attention from a large number of clients, including local governments and developers, because it conforms to national strategies of green and low-carbon development,” he says. “I believe the mass-timber design approaches will get more opportunities of application in the future.”