Solar energy equipment maker First Solar Inc. recently announced plans to build a $1-billion photovoltaic module manufacturing plant at a to-be-determined location in the southeast U.S., and to invest another $185 million upgrading and expanding one of its existing plants in Ohio.

The Tempe, Ariz.-based company is one of the world’s top 10 solar equipment makers, but it may soon find it is part of a larger domestic solar market. A recent report from the Solar Energy Industry Association predicts “significant new investments” in solar capacity within the next few years, thanks in part to incentives included in the Inflation Reduction Act recently passed by Congress and signed by President Joe Biden.

Southfield, Mich.-based Barton Malow has poured concrete footings and recently began steel construction on a $2.6-billion, 2.8-million-sq-ft Ultium Cells plant in Lansing, Mich. The facility will produce battery cells for General Motors Co. electric vehicles including the Chevrolet Silverado EV and GMC Sierra EV. Ultium is a partnership of GM and LG Energy Solution. Steel construction is expected to last until spring 2023 and the facility is scheduled to open in late 2024.

A $1.1-billion advanced manufacturing facility under development in Point Township, Pa., would process 450,000 tons of post-consumer plastics and convert them into raw materials for new products. Pennsylvania-based JJ White is set to build the plant for Texas-based chemical manufacturer Encina Development Group. JJ White’s Australian parent company, Clough, has a contract for front-end engineering design and engineering, procurement and construction on the project in partnership with Hyundai Engineering USA. Encina aims to begin construction within the next few months and begin operating the plant by fall of 2024.

Work recently began on buildout of a 67,000-sq-ft Methuen, Mass., electric vehicle battery development and manufacturing facility for Factorial Energy. Quincy, Mass.-based J Calnan & Assoc. is construction manager on the project. Factorial will produce solid-state EV batteries at the plant. The company expects to begin operating the plant in early 2023. 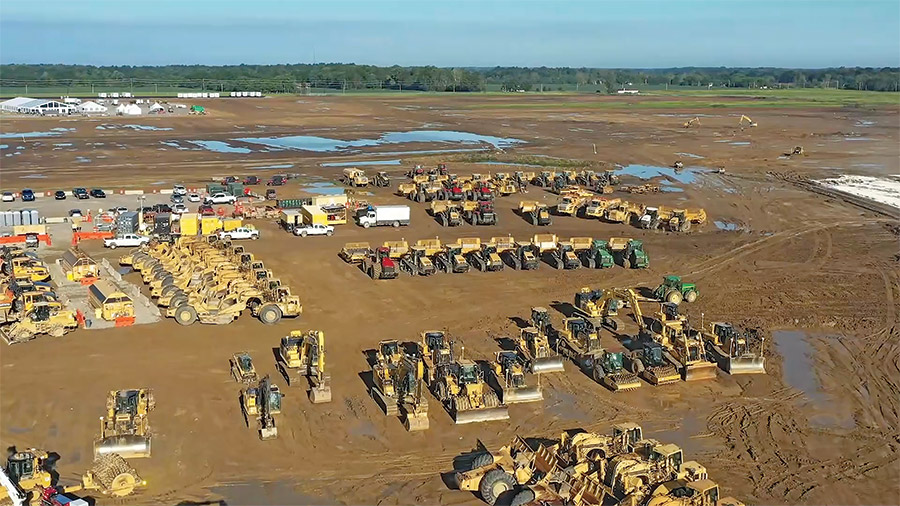 Providence, R.I.-based Gilbane Building Co. and a team of contractors began excavation work this summer on Intel's $20-billion, 1,000-acre “mega-site” in New Albany, Ohio. Intel held a formal groundbreaking with President Biden Sept. 9 for the two semiconductor chip plants it plans to build there. Intel says the plants, known as “fabs,” are expected to begin production in 2025. The site could accommodate as many as eight fabs costing $100 billion.